Note to The Society of St. Pius X: Who Cares What Lefebvre Said or Did? 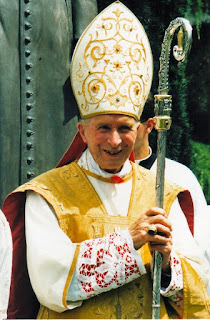 The Society of St Pius X (SSPX) is guilty of doing what some Traditionalists do: make an infallible icon of one of their leaders. The SSPX does this to the extreme due to their schizophrenic theology of "recognize and resist" (i.e., we recognize the "pope" but we resist whatever we feel is wrong). The result is a mixed up pseudo-Traditionalist group that wants to keep the Faith and to be in union with the very Modernist who is seeking its eradication.

In a recent e-mail they sent to friends and benefactors, there was an article entitled, "SSPX in the USA: 25 Years Ago" to commemorate the Silver Jubilee of Abp. Lefebvre's June 30, 1988 consecration of four bishops to continue the work of the Society. The purpose of the article was to "inform" the readers of how bad things were for "tradition" back then as compared to the present. Interestingly, the article notes (with some admiration), the "independentists" (i.e. those priests who did not belong to the SSPX), but they give no mention of Fr. Gommar A. De Pauw or Bishop Blaise S. Kurz who were the first to stand up and fight for the preservation of the One True Church. (See my post "The First" of January 19, 2013). Why did they omit Fr. DePauw and Bishop Kurz? It would conflict with one of the basic tenets of the SSPX; Archbishop Lefebvre was the first Traditionalist and he alone is responsible for the preservation of Catholic Tradition. But, wait a second, don't they believe that Francis is "pope"? Isn't the pope the Christ-appointed Guardian and interpreter of Tradition? Don't you accept John XXIII, PaulVI, John Paul I, John Paul II, Benedict XVI, and Francis, so that there was never a need for the Archbishop?

The article continues with this tidbit: "So much good work could not go unimpaired. The trickster had to upset this well-oiled machinery of Tradition. That is when some of the earlier “founding fathers” decided that they knew better how to save souls than Archbishop Lefebvre and thought he was getting old and did not understand the American mentality."

The reference is to the nine priests who started the sedevacantist Society of St Pius V, and have a true Traditionalist theology (1983). Note what was written, "they knew better how to save souls than Archbishop Lefebvre.." The clear implication being that they were arrogant fools to think ANYONE knows better than Lefebvre. Truth be told the Archbishop was a good man, good Catholic Bishop and a true hero in the fight to save the Church in an age of near universal apostasy. But the SSPX uses him as a substitute pope whose teachings are preserved from error by the Holy Ghost. Please note that the SSPX, under Bishop Fellay who is looking to sell out to Modernist Rome, has begun to purge any articles and publications that contain Archbishop Lefebvre's statements entertaining the possibility of sedevacantism. Such historical revisionism is necessary because you can't hold someone up to be an infallible icon, whose every action and word must be uncritically accepted, and then expose people to his words endorsing the idea of a papal vacancy.  People might get the "wrong" idea, namely, sedevacantism is a logical and viable theological conclusion.

Traditionalist John Daly has compiled some interesting quotes of the Archbishop:
1. “You know, for some time, many people, the sedevacantists, have been saying, ‘there is no more pope’. But I think that for me it was not yet the time to say that, because it was not sure, it was not evident…” (Talk, March 30 and April 18, 1986, text published in The Angelus, July 1986)

2. “The question is therefore definitive: is Paul VI, has Paul VI ever been, the successor of Peter? If the reply is negative: Paul VI has never been, or no longer is, pope, our attitude will be that of sede vacante periods, which would simplify the problem. Some theologians say that this is the case, relying on the statements of theologians of the past, approved by the Church, who have studied the problem of the heretical pope, the schismatic pope or the pope who in practice abandons his charge of supreme Pastor. It is not impossible that this hypothesis will one day be confirmed by the Church.” (Ecône, February 24, 1977, Answers to Various Burning Questions)

3. “To whatever extent the pope departed from…tradition he would become schismatic, he would breach with the Church. Theologians such as Saint Bellarmine, Cajetan, Cardinal Journet and many others have studied this possibility. So it is not something inconceivable.” (Le Figaro, August 4, 1976)

4.  “Heresy, schism, ipso facto excommunication, invalidity of election are so many reasons why a pope might in fact never have been pope or might no longer be one. In this, obviously very exceptional case, the Church would be in a situation similar to that which prevails after the death of a Pontiff.” (Le Figaro, August 4, 1976)

5. “…these recent acts of the Pope and bishops, with protestants, Animists and Jews, are they not an active participation in non-Catholic worship as explained by Canon Naz on Canon 1258§1? In which case I cannot see how it is possible to say that the pope is not suspect of heresy, and if he continues, he is a heretic, a public heretic. That is the teaching of the Church.” (Talk, March 30 and April 18, 1986, text published in The Angelus, July 1986)

6. “It seems inconceivable that a successor of Peter could fail in some way to transmit the Truth which he must transmit, for he cannot – without as it were disappearing from the papal line – not transmit what the popes have always transmitted.” (Homily, Ecône, September 18, 1977)

But, this does nothing to prove sedevacantism either! To be intellectually honest, any theological opinion or conclusion must be judged by the manifest weight of the credible evidence, not by what an Archbishop (no matter how holy) said, taught, or approved by his actions.

1. They claim that the Novus Ordo is inferior to the True Mass and is subject to possible abuses and invalidity, but it is not invalid per se. Even if conceded that the Novus Ordo was valid (and it certainly is NOT), the fact they hold it inferior means it did not and could not come from the Church! The dogma of Indefectibility, declares that the Church can not give that which is evil. But to give God less than the best is an evil. Think of the Bible's recounting of Cain and Able.

Why was Cain's offering unacceptable? Some people have suggested that it was because he offered plants while Abel offered animals. I don't think this is necessarily the case, since God accepted grain offerings at other times (Lev.2) and since the laws regarding sacrifices had not yet been given (though it is interesting to note that Abel offered fat portions as prescribed in the Levitical law - see Lev. 3). It's possible that Cain and Abel had received some instruction on what constituted an acceptable sacrifice from God, or that Cain had committed other wrongs that would make his offering unacceptable to God. However, the passage does give us some clues. It says that Abel "brought fat portions from some of the firstborn." He offered some of what came first, as opposed to waiting until an animal had plenty of offspring (and the oldest were reproducing themselves) and then sacrificing one of the youngest, and he offered the choicest parts. Abel was clearly giving the best of what he had to God. Cain, on the other hand, brought crops, which were not necessarily the best crops - they may have been damaged and/or been what Cain considered "extra" or "leftover." Abel's and Cain's actions were a reflection of their attitudes towards God: should God receive the best of what they had or not?

If the Vatican II sect is not giving God the best as the SSPX claims, then the sacrifice is NOT pleasing to God, an evil, and could not come from the Church. That means Paul VI and the bishops in union with him, despite all the outward appearances, defected from the Faith, lost their authority, and set up a false sect.

2.  They claim all the other Vatican II sacraments are valid, just less good than the pre-Vatican II sacraments. This means their fight is not one of Truth vs. falsehood, but rather mere preference, i.e., you like Latin and I like the vernacular, etc.

3. Annulments from the Vatican II sect are accepted in the SSPX. There were only 392 annulments worldwide from 1952-1956, and 49,069 annulments in the US alone in 2000. So the SSPX is increasing the annulment problem and has even set up tribunals to handle annulments themselves. This is another example of a Modernist error that Catholics must avoid. How, if you have a pope and bishops with Ordinary jurisdiction, can you "oversee" and "check" their work? This sets the SSPX up as an "Uber-magisterium." How is this any different from having no pope and no Magisterium functioning as you can't trust their teachings anyway?

4. The SSPX believes Vatican II Popes are true, but at the same time disobeys them. Catholics MUST submit fully to true Popes on matters of faith and morals.
And these are just SOME problems.

The bottom line is this: Archbishop Lefebvre was a good man, of great learning and piety. He did the best he could to think through the unprecedented age we're in. He was not (nor did he claim to be), the pope, sent as an oracle from God, or the final arbiter as to what must be done. Those who now control the SSPX and try to make more of him then he was, are theologically wrong to do so and disingenuously hiding behind his (selected) words and deeds to coerce compliance with things which are not Catholic and dangerous to souls.

As Father DePauw said publicly, "Don't ever call yourself a "follower of Fr. DePauw." The only One you should follow, is the One Who resides in the Tabernacle. We are called Christians because we follow Christ, the God-Man Who deserves to be followed and must have our undying loyalty." Amen! Some of those who run the Catholic Traditionalist Movement have unfortunately forgotten his sage words, which are true objectively, not because he said them.

To the members of the SSPX: Don't ask yourself "WWLD" (What Would Lefebvre Do), rather ask yourself, "What does the Church teach through Her approved theologians"? This way you will be following Christ and His Church, and not a mere man--no matter how esteemed.
Posted by Introibo Ad Altare Dei at 12:27 PM