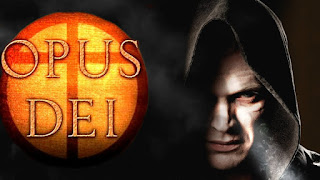 Mention Opus  Dei ("The Work of God") and you will receive a wide variety of responses to "The Work" founded by "St" Josemaria Escriva. To the secular world (as well as most in the Vatican II sect), it's seen as a very "conservative,"and "traditional" organization which is devoted to the "papacy." As people have inquired as to this organization, I will seek to answer three questions: (1) Who was Josemaria Escriva?, (2) What is Opus Dei?,(3) Is Opus Dei, in any sense, Traditional Catholic?


According to an excellent summary in 30 Days magazine (June-July 1995):

"Josemaria Escriva de Balaguer was born in Barbastro, Spain, on January 9,1902, son of a cloth merchant and a pious housewife. He was ordained to the priesthood in Zaragoza on March 28, 1925.

In 1939 the first edition of Camino (The Way) was published, setting forth Escriva’s 999 maxims to serve as a guide for Opus Dei members. On May 24, 1941, the Archbishop of Madrid, Leopoldo Eijo y Garay, publicly defended Opus Dei against accusations of secrecy from some sectors in the Spanish Church.

Escriva came to Rome on June 23, 1946, returning to Madrid in August with Holy See encouragement for his initiatives. Pope Pius Xll’s promulgation Provida Mater Ecclesia (February 2, 1947) gave juridical status to secular institutes such as Opus Dei. Finally on June 16, 1950, Opus Dei received its definitive approval from the Holy See. The organization became the first secular institute approved directly by the pope and took on the title "Priestly Society of the Holy Cross and Opus Dei." In 1962, Fr. Escriva pleaded in vain with Pope John XXIII to grant Opus Dei a different status from other secular institutes, which were answerable to the Congregation for Religious and Secular Institutes. A few years later, Pope Paul Vl also set aside the request, saying the time to grant it had not yet come.

In spite of the opposition of a large part of the Catholic clergy and a majority of the Spanish bishops (55 of 56), the Vatican announced on August 23,1982 that Pope John Paul had decided to grant the status of Personal Prelature to Opus Dei."

Escriva had the idea of a way (deemed "The Way") for sanctity concerning laity remaining in the world, but it was very different from that of traditional spirituality such as St. Francis De Sales. According to one writer:

"The basic difference between the two[traditional spirituality and The Way of Opus Dei] can be expressed as movements in opposite directions. One answers [the call to vocation] from outside the world and moves toward it, bringing its presence toward it. This is the evolution of the religious state. The other is a "being in the world"; it starts from being of the world. Such is the Opus Dei’s secular spirituality....This is what made Card. Luciani, the future Pope John Paul I, say that while St. Francis de Sales proposed a spirituality for lay people, Msgr. Escriva proposes a new lay spirituality."(See D. LeTourneau, L'Opus Dei, pg. 26; Emphasis mine)

Interestingly, he debased the priesthood, and paved the way for Vatican II's Modernism. One report states:  Escriva was happy when his first three priests were ordained, but he was also very sad that they did not remain laymen(!)

He was devoted to the Modernism of Vatican II. This explains Wotyla's ("Pope" John Paul II) hurry to "canonize" him in 2002. One need only look at the "miracles" attributed to him to see they were as phony as his teachings:

Opus Dei is organized like a religious order, comprised overall of priests and laity. Entering "the Opus" is considered to be a vocation and there are a rule and vows, although married members take different ones. It is a personal prelature, meaning that, there is a prelate, clergy and laity under the direction of the Congregation of Bishops. As opposed to a diocese, people are bound to the prelature by membership as opposed to geographical area.

They have four classes of membership:
The idea is sanctification in the world. There have been reports of abuse of authority,Freemasonic-like secrecy, a certain feeling of superiority through a gnostic-like knowledge given to members, and harsh penances. It has been likened by some authors to a cult.

3) Is Opus Dei, in any sense, Traditional Catholic?

In summation, don't be fooled by the seeming piety displayed by many members of Opus Dei. They are a front promoting the same Modernism as the sect to which they belong. In that same interview above, the leader of Opus Dei praises Antipope Francis and states, "In countries with a Christian tradition, Opus Dei (through its activities for spiritual formation) offers a path for rediscovering the faith in the midst of one’s daily occupations. This is what the New Evangelization means: to re-enkindle in Christians (who sometimes see themselves as such only because of their cultural context) the flame of a living and personal relationship with God." A "relationship" as each individual sees fit, divorced from the True Church.
Posted by Introibo Ad Altare Dei at 5:28 AM