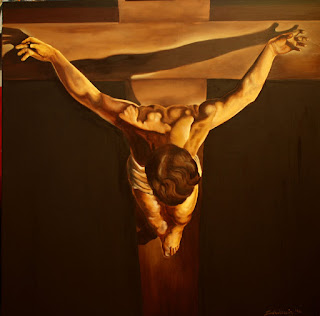 Anyone who has had the misfortune of attending the Novus Bogus "mass" of the Vatican II sect will immediately get the idea that the service is about them, not God. It's about "the assembly" getting together and having a good time to commemorate the Lord's Supper. The emphasis is upon enjoying a meal, not renewing the unbloody sacrifice of the Cross. Much emphasis is given to the Resurrection and the sacrificial death of Christ is downplayed in what has been referred to as Vatican II's "Paschal Theology."

I got a good insight into this new Soteriology (that branch of theology which deals with the Redemption of the human race) when I came across an early writing from the Vatican II sect:

"It would be excessive to think that it might have been necessary to wait for Vatican II because, again, the term and the theology of the Paschal mystery was very much alive in the Church and was a part of the Church. However, it has to be recognized that such a rediscovery did not take too long to occur. The last and most important liturgical document prior to Vatican II, Pius XII's 1947 encyclical, Mediator Dei, did not as yet employ the term. It speaks of redemption and does not insist at all on Our Lord Jesus Christ's resurrection. It keeps to the viewpoint that posits the death of Jesus Christ-- the central salvific event, and still does not emphasize that His Resurrection is as much, and in an essential way, the event of the world's salvation." (See Dictionary of the Second Vatican Council (Corpus Books, Washington, D.C., first edition, 1968) "Paschal Mystery," Fr. Adrien Nocent, O.S.B., and Jacques Deretz eds.--Emphasis mine)

The Modernist heretics who produced this book lie, as all Modernism is a lie. Pope Pius XII's great encyclical Mediator Dei did not employ the term for a very good reason; it wasn't orthodox, it is heretical. The Modernists, driven underground by Pope St. Pius X, kept the false teaching that Christ's Resurrection was equal to His death in effectuating our redemption. Modernism sees all dogmas as in continual "evolution," from one meaning to another. The great Pontiff condemned such errors in this encyclical as:
"... one would be straying from the straight path were he to wish the altar restored to its primitive table-form; were he to want black excluded as a color for the liturgical vestments; were he to forbid the use of sacred images and statues in Churches; were he to order the crucifix so designed that the divine Redeemer's body shows no trace of His cruel sufferings; and lastly were he to disdain and reject polyphonic music or singing in parts, even where it conforms to regulations issued by the Holy See." (para. # 62)

All the things condemned by Pope Pius XII have been implemented and lauded by the Vatican II hierarchy. Altars were ripped out and replaced by tables; black was removed as a liturgical color and replaced by white (Yea! He's dead! Must be in Heaven so let's celebrate!); and the traditional crucifix was replaced in many of the sects churches with the crosses showing the resurrected Christ and not His wounded, suffering Corpus. Yet they claim Mediator Dei was a step in the direction of Vatican II!!

"....the Church celebrates the Paschal mystery every seventh day, which day is appropriately called the Lord's day or Sunday. For on this day Christ's faithful are bound to come together into one place. They should listen to the word of God and take part in the Eucharist, thus calling to mind the passion, resurrection, and glory of the Lord Jesus, and giving thanks to God who "has begotten them again, through the resurrection of Christ from the dead, unto a living hope" (I Pet. 1:3)."

Notice that there is no mention of the Mass as a True propitiatory Sacrifice for the living and the dead, and the resurrection is put on par with Christ's Passion and death on the cross. So what does the True Church teach about redemption? Is the Resurrection really " as much, and in an essential way, the event of the world's salvation" ?

According to theologian Pohle: "Considered from the distinctive viewpoint of Soteriology, the Resurrection of Christ was not, strictly speaking, the chief, nor even a contributing cause of our redemption; but it was an essential compliment thereof, and constituted its triumphant consummation. (a) The Catholic Church regards the Resurrection as an integral, though not an essential, element of the atonement." (See Dogmatic Theology,  B. Herder Book, Co. (1935), 5:102).

The "Paschal Mystery Theology" compliments the Modernism of Vatican II. "Pope" Francis hides his cross from the Jews. Let's forget what Our Savior did for us. We all have a glorious Resurrection awaiting us, so let's try and eliminate all human suffering and see it as useless. There is no subjective redemptive value in suffering or making sacrifices; strive to feel good and forget sin and the price that He paid. Don't get caught up in "small-minded rules" and "who am I to judge?"  What they fail to realize is that we must follow a suffering Savior. There is no Crown of Glory without going through a Crown of Thorns in this "valley of tears." Francis is ashamed of the cross and wants everyone to forget about it. However, it is Christ Himself that tells us that in order to achieve a glorious Resurrection, a person must first "...deny himself, take up his cross, and follow Me." (St. Matthew 16:24).
Posted by Introibo Ad Altare Dei at 3:23 AM