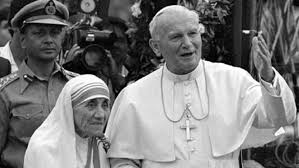 "Pope" Francis has announced that Mother Teresa, who founded the Missionaries of Charity and became famous for her work among the poor and dying in India, would be declared a "saint" in 2016. Without doubt, Mother Teresa performed many good works and is a great humanitarian. However, people lose sight of what Catholic sainthood is really all about. Mother Teresa, born Anjeze Gonxhe Bojaxhiu in Albania, 1910, was credited as healing a Brazilian man of multiple brain tumors, the second miracle necessary under the new rules of the Vatican II sect for "sainthood." To be a true canonized saint, one must profess the Integral Catholic Faith, and be worthy of emulation for heroic virtue. It is not enough that someone was "good" according to worldly standards, or even made it to Heaven.

In the absence of a true pope, no one can be canonized. Given the good work she did (including her strong pro-life stand), I certainly hope that Mother Teresa made it to Heaven. "But before all things have a constant mutual charity among yourselves: for charity covereth a multitude of sins." (1 Peter 4:8). However, she gives good cover for Frankie's sect, which declares "atheists can go to Heaven" as long as one is "good." "Good" in their sense means "nice" and only concerned with the things of this world--an exaltation of the Corporal Works of Mercy over the Spiritual Works of Mercy.

There was an eye-opening book written in 2007 entitled, Mother Teresa: The Case for the Cause by Mark Michael Zima. This well-researched book raises three serious problems with the nun: 1. Statements that teach the error of Indifferentism; 2. practicing invalid Baptisms stemming from a wrongful "respect" for  false sects; and 3. seeming doubts about the existence of God and other statements which suggest universal salvation.


Mother Teresa is quoted as saying, "Some call him Allah, some simply God. But we all have to acknowledge that it is he (sic) who made us for the greater things: to love and be loved."  God is not the false moon "god' named "Allah." God created us to know, love, and serve Him in this life, and to be eternally happy with Him in the next.

In another disturbing quote, she claimed her purpose was not to convert others but to "to make the Christian the better Christian, the Muslim a better Muslim, and a Hindu a better Hindu." Addressing the Masonic United Nations in 1985, she said, "No color, no religion, no nationality should come between us. We are all children of God." (Emphasis mine) The purpose of a Catholic religious is to convert others to the One True Church of Christ, not to entrench others in their errors. A better Mohammedan makes for a worse person. And while it is true that God created all humans, we are not all His children. God Wills all to be saved, but He does not force Himself on us. Those who reject Him, are not His "children," anymore than non-Jews before the coming of Christ could be called His "chosen people."


According to Zima, the policy of Mother Teresa and her nuns was to ask those who were about to die "if they want a blessing by which their sins will be forgiven and they will see God." Most replied "yes," and the nuns would put a wet cloth on their heads and quietly recite the form of baptism.

Serious theological problems: (a) Asking an adult for a "blessing" that will "forgive sins" and allow them to "see God." According to theologians McHugh and Callan, "Since the promulgation of the Gospel, it is also necessary as a means that one believe explicitly in the mysteries of the Trinity and Incarnation. For he who does not accept these, does not accept the Gospel, whereas Christ says: 'Go ye into the whole world, and preach the Gospel to every creature. He that believeth not shall be condemned.' (St. Mark 16: 15, 16)"
This is the more probable opinion. (See Moral Theology, A Complete Course, Joseph F. Wagner, Inc., 1929, 1: 290)  Furthermore, baptism is to be denied "when it is certain that the dying person is substantially ignorant of the Trinity and Incarnation through his own fault, and is unwilling to hear about them." (Ibid, 1: 293). Why weren't the nuns giving proper instruction? If the dying refuses to so be instructed, baptism must be denied. This alone is a travesty and casts serious doubts on validity.

(b) Placing a wet cloth on the head and reciting the form of baptism in a quiet voice. According to theologian Prummer, baptism requires as the remote matter pure and natural water. The proximate matter is the application of the water "by immersion, sprinkling, or pouring." Furthermore, it must be administered "in such a way that in the common estimation of men an ablution has been performed." (See Handbook of Moral Theology, 1957, pg. 253). Placing a wet cloth on the head is not immersion, sprinkling, or pouring, and it most certainly does not appear to be an ablution or cleansing.


According to Protestant minister Sid Burgess, "Thus, it came as quite a shock to the world to learn that for nearly 50 years, Mother Teresa privately experienced doubts over her religious beliefs--doubts which apparently continued until the end of her life. According to the editor of her private papers, who is also the church official directing efforts to have Mother Teresa declared a saint, there were times when 'she felt no presence of God whatsoever,' 'neither in her heart nor in the Eucharist.'" (See http://www.edgewoodpc.org/sermons/sermon061911.html) True, there are saints who experienced a "dryness of the soul" aka, "the dark night of the soul," but not pervasively until the end of life.

She is reported as telling those in her care that, "we will meet all our friends and family members who died before us in Heaven" regardless of their beliefs. She also told non-Catholics, "You could replace Jesus by God if you are not a Christian." She forgets "Be it known to you all, and to all the people of Israel, that by the name of our Lord Jesus Christ of Nazareth, whom you crucified, whom God hath raised from the dead, even by him this man standeth here before you whole. This is the stone which was rejected by you the builders, which is become the head of the corner. Neither is there salvation in any other. For there is no other name under heaven given to men, whereby we must be saved." (See Acts 4: 9-13; Emphasis mine).

Lastly, there's doubts as to the first alleged "miracle" being used for her "canonization." It involved the cure of a young Indian woman, Monica Besra, who claimed that a tumor on her ovary was cured when a medal of Mother Teresa was touched to her body where she felt pain.  Dr. Ranjan Mustafi, the chief gynecologist treating her, claims that it was the four drugs to which she was responding. The Vatican never contacted Dr. Mustafi to investigate, and nevertheless claimed "there was no medical explanation" for her cure.

Mother Teresa was a great humanitarian. She helped alleviate much human suffering. Unfortunately, she did not preach Christ and His One True Church as the antidote to eternal suffering. As Our Lord said, "For what doth it profit a man, if he gain the whole world, and suffer the loss of his own soul? Or what exchange shall a man give for his soul?" (St. Matthew 16: 26)

Posted by Introibo Ad Altare Dei at 3:00 AM