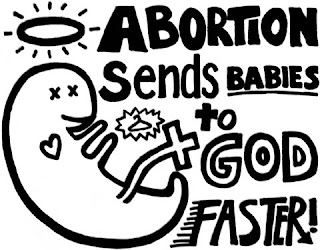 I overheard a remark not long ago, wherein the discussion, which was carried on by two members of the Vatican II sect, centered on abortion. The one person had remarked that although abortion was murder, at least the aborted babies were safely in Heaven. There was no elaboration as to how they get to Heaven, but this perverse remark is now the de facto position of the Vatican II sect. It began when Ratzinger, as "Pope" Benedict XVI, decided to push the heresy of universal salvation further along. In April of 2007, The International Theological Commission, a committee of 30 Modernist theologians who advise the Congregation for the Doctrine of the Faith (the Modernist version of the Holy Office), issued a document entitled The Hope of Salvation for Infants Who Die Without Being Baptized.

This document, although called "non-authoritative," was signed by the so-called "Pope" Benedict. Ironically, it gives the theological justification needed for direct abortion and in vitro fertilization, wherein many newly fertilized human beings are simply "discarded" like trash. It is true that Limbo, the state of those who die in Original Sin only, is not a dogma of the Faith. You can deny Limbo and you would not thereby be a heretic. However, the problems with the "elimination" of Limbo are both many and serious.


What the True Church Teaches


What the Document Signed By Ratzinger Teaches


No Rupture From The Past Teaching?
Practical Consequences for Today
Let me first say that some pre-Vatican II theologians did formulate certain teachings in place of limbo; although their number was very few. The most famous was Cajetan, who taught that infants could be saved by a "vicarious baptism of desire" through the prayers and desire of the parents. This teaching was ordered to be redacted from his writings by Pope St. Pius V. Theologian Klee taught that God would illuminate the intellect of the child just before the moment of death, and give him/her an opportunity to accept or reject Him, in a manner similar to the test given to the angels. Theologian Schell taught that the child's sufering and death served as a "baptism of suffering." Neither of those theories has any support in Revelation, and were basically rebuffed definitively by Pope Pius VI and the unanimous consent of the theologians, especially after Trent.

Abortion is a crime against humanity. It is the systematic murder of babies. To give a woman the idea that if she aborts a baby, the child will be in eternal bliss, would only push her in the direction of abortion. I've asked some acquaintances who were "born again" Christians, "If you can't lose your salvation as long as you believe in Christ, why not commit suicide and go to Heaven right away?" They could never give a satisfactory answer except to say "God doesn't want that." I would say, "Yes, but you go to Heaven anyway." That is basically what the "pro-life" Modernist Vatican is pushing on people: God doesn't want abortion or in vitro fertilization, but if you do it, the murdered children go to Heaven anyway.  To those who think that aborted babies can received BOB by a kind of "martyrdom," this is totally false. BOB necessitates that the child is killed out of hatred for the Faith or some teaching of the Faith.

When fighting abortion it is of the utmost importance we declare that both their earthly life and eternal salvation with God in the Beatific Vision will be lost. Yes, they go to Hell (in the broad sense of the term), as they are separated from God. They are in a place or state not subject to the pain of sense or torture from demons, and probably a small degree of consolation. But they have not reached the eternal destination for which all humans were created. Abortion is not some "ticket to Heaven." Heretical ideas have the most horrible of consequences.
Posted by Introibo Ad Altare Dei at 2:28 AM