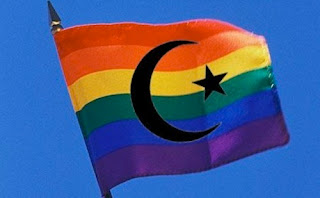 On Sunday, June 12, 2016, American-born Mohammedan Omar Mateen, 29, of Fort Pierce, Florida, gunned down 49 people at a homosexual nightclub in Orlando. Mateen called 911 during the attack to pledge allegiance to ISIS and mentioned the Boston Marathon bombers, according to a U.S. official. Orlando police shot and killed Mateen. He carried an assault rifle and a pistol into the packed Pulse club about 2 a.m. Sunday and started shooting, killing 49 people and wounding at least 53, officials said. This was the worst act of terror since the September 11, 2001 attacks.

Of course in the media, it's seen as a act against sodomites, while claiming simultaneously (without proof) Mateen was bipolar to avoid attacking Islam. It's about mental illness, not religion; or so the left-wing secularists would like us to think. The Chief Communist of the United States, Obama, refuses to denounce Islam in any way, even by avoiding the phrase radical Islam to marginalize the threat that wicked, false religion poses. Vatican II sect "Bishop" Robert Lynch went so far as to blame "Catholicism" (sic) which "targets" and "breeds contempt for gays, lesbians, and transgender people," as one of the "causes" of the shooting. This same character is against banning Moslems from entering the U.S. saying there are "as many good, peace loving and God fearing Muslims to be found as Catholics or Methodists or Mormons, or Seventh Day Adventists." That Mr. Lynch could make such outrageous statements shows you just how far into apostasy (and stupidity) the Vatican II sect  has sunk. (The false "god," Allah, is not the same as the True Trinitarian God. Mormons are polytheistic. What "god(s)" do they fear, Mr. Lynch?).

Truth be told, both Islam and those who practice unnatural vice are both prone to violence. The following run down of facts will never be seen in the mainstream media. Warning! Some graphic language will be used in this exposé.

The top six American male serial killers were all homosexual:

The pathology of eating one’s sexual victims also characterized Milwaukee’s Jeffrey Dahmer in 1992. He not only killed 17 young men and boys, but cooked and ate their body parts. The association between serial murder and homosexuality isn’t recent. Two gays compete for the spot of “world’s worst murderer.” During the Nazi reign of terror, Auschwitz executioner Ludwig Tiene strangled, crushed, and gnawed boys and young men to death while he raped them. Though his grand total is uncertain, he often murdered as many as 100 a day. Gilles de Rais (Bluebeard) brutally destroyed the lives of 800 boys. Each lad was lured to his home, bathed and fed. Just as the poor boy thought "this is my lucky day," he was raped, then killed by being ripped or cut apart and either burned or eaten.

A study of 518 sexually-tinged mass murders in the U.S. from 1966 to 1983 determined that 350 (68%) of the victims were killed by those who practiced homosexuality and that 19 (44%) of the 43 murderers were bisexuals or homosexuals (See Cameron, Dr. Paul,  [1983] "Is homosexuality disproportionately associated with murder?" Paper presented at Midwestern Psychological Assn Chicago.) Lesbian Aileen Wuornos laid claim in 1992 to "worst female killer" with at least 7 middle-aged male victims. She single-handedly topped the lesbian nurse team of Catherine Wood and Gwen Graham, who had killed 6 convalescent patients in Grand Rapids, Michigan.

Jim Warren, who worked as a counselor at the Washington State Corrections Center, did the intake interview for almost all the younger murderers (i.e., under age 36) in the state of Washington from 1971-82 (during the growth of the so-called "gay rights movement"). He was "probably the only one who examined the entirety of each of their case files." Warren testified that he was struck with how frequently homosexuality turned up in the cases (See Warren, J,  [1989] Testimony before the Law and Justice Committee of the Washington State Senate December 15).

The data supports that most violence comes from within the sodomite lifestyle and gets exported. It does not come mostly from the outside against them. Homosexuals are a danger to society, not the other way around. The FBI reported 431 hate crimes against homosexuals for the U.S. in all of 1991. Only one was "confirmed" for Washington, D.C. — yet D.C. gay activists claimed 397 incidents! When pressed, they admitted that at least 366 of these "crimes" consisted of "verbal harassment." (See Washington Blade (1993) "FBI releases stats on hate crimes." January 1, pg.1).  [Research for this section compiled by the Family Research Institute---familyresearchinst.org].

Mohammedans despise unnatural vice but not for the reason Christians do. According to scholar Bruce Dunn, Islamic states place a distinction between the homosexual act (which is acceptable), and the emotional attachment, which is not acceptable. "Sexual relations in Middle Eastern Societies have historically articulated social hierarchies, that is dominant and subordinate social positions: adult men on top; women, boys, and slaves below." (See Dunne, B, [Spring 1998], The Middle East Report, "Power and sexuality in the Middle East."). Sex in Islamic society is about male pleasure through domination. A Mohammedan who sodomizes another is not seen as homosexual, only the one who gets sodomized. According to The New York Times, Male prostitution has been rampant in Islamic society right up to the modern day. They are even frequented by high ranking officials. (See NYT, 6/23/02 "Iran by the Numbers")

Please take note, if Mateen wanted to kill sodomites for their practices, why not target a "gay bathhouse" where anonymous sex and spreading disease is the name of the game? He targeted a nightclub which shows them in a more "romantic" way, consistent with what I reported above.

Summary and Conclusion
With the Vatican II sect firmly committed to the perverts and Islamic infidels, if strong measures are not taken quickly, I fear for what is coming in the not too distant future. It should be no surprise that the lies of the "gay lobby" and Islam are linked to serious acts of violence. Did not Our Lord say of Satan, " He was a murderer from the beginning, and he stood not in the truth; because truth is not in him. When he speaketh a lie, he speaketh of his own: for he is a liar, and the father thereof." (St. John 8: 44).

Posted by Introibo Ad Altare Dei at 2:15 AM