Sedevacantism And The Gates Of Hell 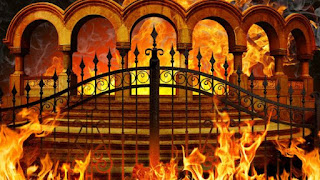 I know I'm not alone among sedevacantists in coming across Vatican II sect apologists telling us, "If what you say is true (there has been no pope since the death of Pope Pius XII in 1958), then 'the gates of Hell have prevailed.'" They are, of course, citing the words of Our Lord Jesus Christ in the Gospel of St. Matthew 16:18, "And I say to thee: That thou art Peter; and upon this rock I will build my Church, and the gates of Hell shall not prevail against it." The problem with the Vatican II sect apologist is that they don't understand the meaning of the words, just like Protestants. Both give meanings alien to the teaching of the Church.

For the Protestant, "this rock" refers not to Peter, but to Peter's faith thereby denying the Divine institution of the papacy. The Vatican II sect apologist thinks that sedevacantism means the Holy Ghost failed to protect the pope from error, thus allowing the Church to teach false doctrine. For them, they must (a) accept Vatican II and its false popes completely with (at best) a preference for the "old ways," or (b) "recognize and resist" ("R&R")the so-called popes of Vatican II, and pick and choose what teachings of their "pontiff" to follow according to how they jibe with Tradition, as understood by them. (SSPX, Siscoe and Salza, etc.).

However, neither approach is correct. The non-sedevacantists believe sedevacantists are saying something that none of us hold; that the pope was protected by the Holy Ghost, and then he did something heretical (sign the documents of Vatican II), and he ceased to be pope. They will (rightly) object, "Then you accuse the Holy Ghost of failing to protect the pope. He would never allow the Holy Father to sign heresy, so what he signed cannot be in error. The seeming contradiction with past teaching is only apparent, not real." Unfortunately, some sedevacantists, not fully comprehending the Catholic theology behind the position, explain it in this incorrect manner which opens it up to this objection.

The apologists for Vatican II are correct in saying that the Holy Ghost would not allow a true pope to sign an heretical document---and that is the precise reason I'm a sedevacantist! If Paul VI had been a true pope on November 21, 1964, he would NOT have signed it, but the fact that he did means that at some point prior to that time, he professed heresy as a private theologian and fell from the pontificate. Hence, the pope did not sign Lumen Gentium, but the heretic Giovanni Montini did. According to theologians Vermeersch and Creusen, "At least according to the more common teaching, the Roman Pontiff as a private teacher can fall into manifest heresy. Then, without any declaratory sentence (for the supreme See is judged by no one), he would ipso facto fall from a power which he who is no longer a member of the Church is unable to possess." (Epitome Iuris Canonici, Rome: Dessain [1949], 340--Emphasis mine).

This clearly shows the folly of the "conservative" members of the Vatican II sect as well as the R&R crowd. The pope can fall into heresy and a heretic can't be pope. Hence, there is no "pope" to recognize, and the Holy Ghost did not fail to protect the pope since he had fallen from office by profession of heresy as a private theologian. As Pope Pius XII taught in his encyclical Mystici Corporis Christi (1943): "Actually only those are to be included as members of the Church who have been baptized and profess the true faith, and who have not been so unfortunate as to separate themselves from the unity of the Body, or been excluded by legitimate authority for grave faults committed."(para. #22, Emphasis mine) Those who do not profess the True Faith (heretics) are not members of the Church, and he who is not a member of the Church cannot be the visible Head of the Church (pope).

Few people stop to ask themselves, "What exactly are the 'gates of Hell' according to the Church?" Pope Virgilius at the Second Council of Constantinople, in 553 AD, called "the tongues of heretics", the "gates of Hell." Pope St. Leo IX in his letter entitled In terra pax hominibus (September 2, 1053), told Michael Cerularius that "the gates of Hell" are the "disputations of heretics." Based on these papal teachings, it clearly implies that heretics and their heresies will never overcome the Church. It teaches the dogma of the Indefectibility of Holy Mother Church.

Indeed, Traditionalists are the remnant Church. We understand Indefectibility, while R&R and "conservative" Vatican II sect members do not. They have a "gobbledygook Magisterium;" one that fails to teach because of (a) conflicts with prior teaching that require you to decide what to follow in neo-Protestant fashion and (b) the need for constant "clarifications," e.g. Ratzinger and Wotyla trying to "clarify" what "subsist" in the heretical document Lumen Gentium means 36 years later in Dominus Iesus.

The Vatican II sect believes the the Church teaches:

These are novelties unheard of before the Council. To each point above, what kind of mental gymnastics will Vatican II apologists go to "reconcile" them with the constant teaching of the True Church? Consider:

"And from this wholly false idea of social organisation they do not fear to foster that erroneous opinion, especially fatal to the Catholic Church and the salvation of souls, called by our predecessor, Gregory XVI, insanity, namely that the liberty of conscience and worship is the proper right of every man, and should be proclaimed by law in every correctly established society... Each and every doctrine individually mentioned in this letter, by Our Apostolic authority We reject, proscribe and condemn; and We wish and command that they be considered as absolutely rejected by all the sons of the Church."

"The Most Holy Roman Church firmly believes, professes and preaches that none of those existing outside the Catholic Church, not only pagans, but also Jews and heretics and schismatics, can have a share in life eternal; but that they will go into the eternal fire which was prepared for the Devil and his angels, unless before death they are joined with her..."

On the primary ends of Marriage: Canon 1013 of the 1917 Code of Canon Law: "The primary end of marriage is the procreation and upbringing of children."

On "dissentions" with Islam: The Catholic Church has the Divinely instituted right and obligation (a) to tell the human race what they must believe and (b) to govern them. Therefore, it is not possible that any "quarrels and dissensions" which have remained unresolved can be Her fault.

Conclusion
"The gates of Hell," i.e., the "tongues of heretics" have not prevailed. The Holy Ghost has preserved the Church from Vatican II, and She continues without a pope in this time of near universal apostasy. Traditionalists need not "pick and choose," teachings, look for "reverent liturgies," and need 1,001 "clarifications" as to what the alleged "pope" had to say. Ironically, those who employ the "gates of Hell" argument against Traditionalists, are themselves being led by the tongues of heretics towards that portal over which the sign reads, "Abandon All Hope Ye Who Enter Here."
Posted by Introibo Ad Altare Dei at 3:51 AM