Jung And The Restless 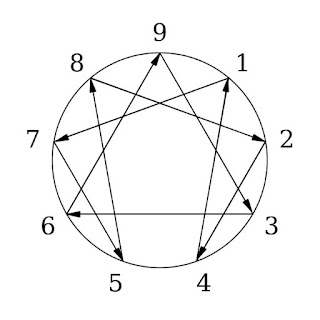 There are many influences (all bad) which have shaped the Vatican II sect. Twenty-three years ago, a friend of mine wanted me to accompany him to a Jesuit-run retreat house. I would only attend on the condition that it would be a private retreat, I would not participate in any Vatican II sect service or prayers, and he would join me in the traditional Rosary at least once in private. He had just come to belief in Christianity, and I was hoping to get him away from the Vatican II sect in which he was raised. He agreed to my terms. Upon arrival, the "nun" (dressed like a lesbian and standing for everything unholy), gave us information on the Enneagram and how it would be used in all prayers and services. We politely told her we were praying in private and had no interest. She looked at us askance, and walked away. The Enneagram is but one of many gnostic-inspired influences that has a prominent place in many Vatican II sect churches, retreat houses, and prayer groups. It came into vogue through the influence of Carl Jung; the infamous psychoanalyst.  I will examine Jung (pronounced "yung") and his role in the destruction that was Vatican II. (N.B. The Gnostic heretics believed that salvation is not through Christ and His One True Church, but through secret knowledge. They also acknowledge there are two "gods"--one who made the physical world, and the other good "god" who wants us to escape the material world. To find the truth you do not look for external revelation, but within yourself for the "spark of the divine." ---Introibo)


Who was Carl Jung?

Carl Gustav Jung was a Swiss psychoanalyst (b. 1875) who abandoned the Lutheran sect of his parents for the occult. Jung’s entire life and work were motivated by his hatred of Catholicism, the Faith and Morals of which he considered to be the source of all the neuroses in the world.  Jung’s mentor was psychoanalyst Otto Gross (1877-1920). He was particularly drawn to Gross's ideas about the "life-enhancing value of eroticism" and his concept of "free love." Jung wrote with approval of Gross’s use of sex orgies to promote pagan spirituality, as he did when he wrote: "The existence of a phallic or orgiastic cult does not indicate eo ipso a particularly lascivious life any more than the ascetic symbolism of Christianity means an especially moral life." Jung, absorbed by eroticism and entranced by the occult, sought to provide a holy merger of the two, which is now popularly know as "Jungianism". In 1912, at the age of 37,  he declared that he could no longer be a Christian, and that only the "new" science of psychoanalysis—as he defined it through "Jungianism"—could offer personal and societal rebirth.

Many of the apostate clergy in the wake of Vatican II became disciples of Jung, and were eager to spread his errors. As a result, Jungianism has become a great money-maker in the Vatican II sect, by promoting books and seminars on such topics as "analysis of dreams," "archetypes," "Enneagram personality types," and "discovering the god within you." They despise the Rosary as "out of date." The traditional Mass is derided as "patriarchal" and "sexist." God, for Jungians, must be both male and female--incorporating the Eastern pagan notion of "ying and yang." The Mass is a "communal celebration" (sound familiar?) and the Real Presence in the Eucharist is denied since we all have "god within," a form of pantheism. According to Robert Noll's book, The Jung Cult, "...for literally tens of thousands, if not hundreds of thousands, of individuals in our culture, Jung and his ideas are the basis of a personal religion that either supplants their participation in traditional organized Judeo-Christian religion or accompanies it."

The Enneagram and Deception
The Enneagram was developed indirectly from the Sufi religion (a mystical dimension in the darkness that is called Islam) and promotes "self-knowledge" through the use of traditional theological terms. You are to get in touch with your "true self" and let go of the "false self." This was Jung's goal for transforming religion away from God, and turning it inward to "the divine" in each individual. The Enneagram is a figure composed of three parts. There is an outer circle, an inner triangle and an irregular hexagonal figure containing nine points that touch the outer circle. Each part of it is connected to gnostic spirituality: the circle represents unity, the inner triangle "the law of three," and the hexagon "the law of seven."

Sin = personality traits that separate people from God or their true selves.

Original Sin = a person is never at any time in his life undamaged or free, but is always exposed to harmful forces

Prayer = delving into Nothingness to become "one" (pantheism)

Redemption = freedom from one's "false self " to one's "true self "

Faith = having doubts about yourself and overcoming them

Jung and the New "Mass"

According to Stephan A. Hoeller, The Gnosis of the Eucharist (See http://gnosis.org/gnosis_eucharist1.html),

That great modern representative of the Gnosis, C.G. Jung, had a great interest in the Christian sacraments, particularly in the Mass...Jung emphasizes that those involved in the celebration of the Mass are ministering causes of the divine event. The priest does not cause the mystery; he is merely a minister of grace and power. The same is true of the congregation and of the seemingly inert substances of bread and wine. The Mass is not an action executed by humans, but by divinity.

In addition to the views of the mass discussed above, there is also the notion that this mystery is of the nature of a sacrifice. The sacrifice, in its Gnostic sense, involves the return of the alienated spark to its original flame. Neither philosophy, metaphysics, nor dogma can accomplish this longed-for union, for it is not a matter of concept but of experience. If we wish to join our shining twin in heaven by removing the dichotomy, we must do a work, an opus, as the alchemists of old would have called it. We must offer the bread and wine of our lesser nature to a power from above, so that this human self may be transformed into the likeness and indeed the substance of the wholly other, the alien God, the One beyond and above all the aeons, who in some utterly mysterious way is still our own, true, inmost Self. God in man returns to himself in the sacrificial mystery. (Emphasis mine)

The mysteries in the pre-Christian era were elaborately devised ritual dramas contrived to intensify the spiritual transformation of the initiate. They were usually patterned after the mythic life, death, and resurrection of a particular deity to whom the mystery was dedicated. The candidate was usually made to symbolically undergo certain events in the life story of the hero. This is still evident in the initiation rituals of Freemasonry, particularly in the sublime degree of Master Mason, where the candidate undergoes the death and rising again of the Masonic hero Hiram Abiff.

The pagans of antiquity were convinced that humans could undergo apotheosis, that they could become gods and goddesses. The Mass is closely connected with this process, since in its mysteries earthly substances are transmuted into divine ones, and, more important, humans may be similarly transformed in their psychospiritual natures. The ancient Gnostics for the most part seem to have held that Jesus was a human being who, very much like a hero in the pagan tradition, became divine as a result of his spiritual virtue. Jesus the hero became Christ the God. (This event is said to have been finalized, as it were, on the occasion of the baptism of Jesus in the river Jordan, which was called the Epiphany, or the manifestation of Christ to the world.) ---(Emphasis mine)

Conclusion
Gone are the days of The Spiritual Exercises of St. Ignatius of Loyola. The Vatican II sect is brimming over with gnostic heresy--indeed, is not Modernism the "synthesis of all heresies" as Pope St. Pius X taught?

If you ever pick up books that purport to be "traditional" in spiritual exercises, but were published after 1964, please avoid anything that:


Vatican II retreat houses are full of the pagan teachings of Carl Jung derived from gnostics of old. Countless souls have lost their faith. My friend with whom I went on retreat was so confused and disenchanted with the garbage peddled in the Vatican II sect, he became a Protestant. I couldn't convince him it wasn't the Catholic Church but a new sect posing as the True Church. Another case of someone restless for God, and wanting bread, was given a stone instead. I pray for him and feel sorry for him. Jung's influence is even seen in the Novus Bogus, where everyone participates to "become divine." If "god" is in us, we don't need to have a tabernacle to face during Mass. It's about the people and their self-importance.  The psychoanalyst's name may be Jung; but the heresies he peddles are very evil and quite old.
Posted by Introibo Ad Altare Dei at 3:05 AM