A Matter Of Conscience 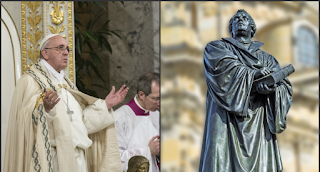 The Vatican II sect exalts "conscience" above all else. When I attended a Vatican II high school (having converted to the True Church in 1981, at the beginning of my junior year), an ex-nun was head of the religion department. She would invite Episcopalian "priestesses" to explain why the Church was "misogynistic," and we were told we must always "follow your conscience." Engage in premarital sex? Need an abortion? Do "what your conscience tells you." (As a result, at least two girls with whom I graduated became pregnant and murdered their unborn child.) Divorce and "remarriage" by a justice of the peace was likewise OK if your conscience told you so, and you'd remain a "good Catholic." (Remember, this was in 1981, way before Frankie officially opened the door to the reception of "communion" by adulterers). There was one problem: the apostates talked about "conscience" without ever offering an explanation of what it really was and the correct principles behind it. As there seems to be very few correct explanations on the Internet, I will expound on the correct teaching regarding conscience and its use.

Conscience is a judgement of practical reason on the moral goodness or sinfulness of an action. It applies natural law/ Divine Law/ecclesiastical law to concrete cases. It may be divided according to several concepts:

There are other divisions, but these two are most pertinent.

The Authority of Conscience

Conscience must be obeyed. You must do what it commands you to do and refrain from that which it forbids. It acts, in a sense, as "the Voice of God." "...all that is not from conscience is sin." (See Romans 14: 23). Furthermore, conscience obliges from the nature of things because apart from revelation, there is no other way of learning what God wishes one to do here and now. However, the authority of conscience is not unlimited.

This was not intended to be an exhausted treatment on the subject of conscience, but merely to give a general overview. I have taken and condensed all the information above from theologians McHugh and Callan, Moral Theology, Volume 1, and theologian Jone, Moral Theology.

The heretical Vatican II "Pastoral Constitution On The Church In The Modern World"(Gaudium et Spes), states in para. # 16:

"In a wonderful manner conscience reveals that law which is fulfilled by love of God and neighbor. In fidelity to conscience, Christians are joined with the rest of men in the search for truth, and for the genuine solution to the numerous problems which arise in the life of individuals from social relationships. Hence the more that a correct conscience holds sway, the more persons and groups turn aside from blind choice and strive to be guided by the objective norms of morality."

Problems abound in this declaration. "...are joined with the rest of men in the search for truth." What "truth" is being invoked? Truth in matters of Faith and Morals. Wouldn't truth have to come from the infallible teaching of the Church? Replacing the sure possession of the truth established by the Magisterium, the Robber Council substitutes an "inquiry into the truth" as a general criterion of a general truth, which is something indeterminate. Hence, my former (thankfully defunct) "Catholic" high school, in imitation of Luther, would instruct you to "search for the truth," and tell you that it is permissible to follow your conscience even if it leads you to have sex outside of marriage or to murder your unborn child. Any "Catholic" who needs to "search for truth," has either lost their Faith or their marbles--probably both.

Next, this "search for the truth" ought to be done in union "with the rest of men" and thus also (and above all) with non-Catholics, i.e.,  with those who deny all or almost all of the truths taught by the Church. How can this type of "search" arrive at positive results, in as much as it must also be applied to "moral problems" which are part of "numerous problems" as stated in the heretical text? Henceforth, members of the Vatican II sect ought to resolve these "moral problems" ecumenically through dialogue, and not by applying the principles transmitted by the True Church in matters of faith and morality.

Finally, the conciliar text specifies that, when "correct conscience" leads them, humanity moves away from "blind choice." However,  in order to resist the "blind choice" of the passions and temptations, people must be aided by Grace. Vatican II never mentions God's indispensable Grace.  "Conformity" to "objective norms" of the moral law, placed in our hearts by God, now exclusively depends, for the Vatican II sect, on "correct" conscience, and therefore on the individual being plunged into his "search for the truth" along with everyone else.

A correct conscience, fully and properly informed by Church teaching, is the surest guide to help us get to Heaven. If you don't have one, you get the secular world's bastardized rule, "Let your conscience be your guide." These words were popularized by the Disney character Jiminy Cricket, a character from the movie Pinocchio, whose name is a minced oath/blasphemy  for the Most Holy Name of Our Lord and Savior, "Jesus Christ." (It was also used by Judy Garland in the occult-themed movie The Wizard of Oz, when she exclaims, "Jiminy Crickets!" upon being startled by the Wizard's lights and smoke charade). Always seek the guidance of the True Church, or a phony "conscience" will lead you to an all too real Hell.
Posted by Introibo Ad Altare Dei at 3:08 AM