The Evil Of Cremation 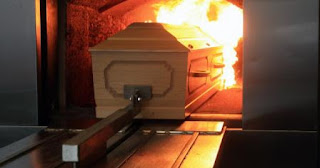 On August 15, 2016, the Vatican II sect's Congregation for the Doctrine of the Faith (sic), issued a decree entitled,  Ad resurgendum cum Christo ("To Rise with Christ"). The decree, approved by arch-Modernist "Cardinal"Gerhard Muller, is a condemnation of certain "abuses" in the process of cremation. Cremation is the incineration of a human cadaver and the preservation of the ashes. There have been reports of people who have their ashes scattered at sea, preserved in jewelry, or made into a "memento." (All of which were duly noted in the Modernist Vatican's decree). According to the "Cremation Association of North America" (See CANA at cremationassociation.org), in the United States, approximately 15% of people who died in 1985 were cremated. In 2015, an astounding 44.42% of the deceased that year were cremated, with a projection that by the year 2025, just over 55% of people will be incinerated to ashes as opposed to being buried in the ground or a mausoleum.

The True Church always considered cremation to be a great evil. It goes as far back as  1300 AD, when Pope Boniface VIII declared any Catholic who procures cremation for himself excommunicated. On December 15, 1886, His Holiness, Pope Leo XIII,  decreed that if someone has made a public request to be cremated and dies without retracting this sinful act, it is forbidden to give him an ecclesiastical funeral and burial. The 1917 Code of Canon Law made the teaching of the Church very clear. Canon 1203, section 1, states, "The bodies of the faithful must be buried and their cremation is wholly condemned. (reprobata)" Canon 1240, section 5 denies ecclesiastical burial (and as a consequence a Requiem Mass) to those who order their own cremation, even if the order wasn't carried out, unless such order was retracted prior to their death. What's wrong with cremation? Why did the Vatican II sect permit it? These questions will be answered in this post.


The True Teaching On Burial Of Human Bodies

There are several reasons why the Church requires burial:
(The above was condensed from canonists Abbo and Hannon, The Sacred Canons, 1:470-471;496).

Why Do People Choose Cremation Over Burial?
Popular reasons given are as follows:
The Real Impetus Behind Cremation: Enemies of Catholicism

The popular reasons enumerated above may be the rationale for certain people being cremated. However, they are  not viable at all for a Traditionalist.

The real reason cremation has been pushed since the French Revolution (and most especially since the late 19th century) can be summed up in one word: Freemasonry. A circular was put out by the Masons in the latter part of the 1800s stating thus:

"The Roman Church has issued a challenge by condemning cremation. The Freemasons should employ every means to spread the usage of cremation. The Church, by forbidding the burning of corpses seeks to maintain its rights over the living and the dead, over consciences and bodies, and seeks to conserve in the masses of the people the old beliefs, today dispelled by the light of science, extending even to the spiritual soul and the future life."

The word cemetery comes from the Greek meaning dormitory. In the cemetery souls "rest," waiting in the afterlife as it were, until they are reunited to their bodies and awake to another life (think: resurrection). Cremation suppresses this symbolism and the truths they convey. The corpse is like the grain of wheat that gets buried, and seemingly dies, but sprouts up in new life. A burnt grain of wheat will never do that; a burnt body seems like death has the final say and is definitive.

The Vatican II Sect and Cremation

As noted in paragraph #1 of the Modernist Vatican's latest declaration on cremation, "With the Instruction Piam et Constantem of 5 July 1963, the then Holy Office established that 'all necessary measures must be taken to preserve the practice of reverently burying the faithful departed', adding however that cremation is not 'opposed per se to the Christian religion' and that no longer should the sacraments and funeral rites be denied to those who have asked that they be cremated, under the condition that this choice has not been made through 'a denial of Christian dogmas, the animosity of a secret society, or hatred of the Catholic religion and the Church.'  Later this change in ecclesiastical discipline was incorporated into the Code of Canon Law (1983) and the Code of Canons of Oriental Churches (1990)."

Indeed, it was one of Montini's ("Pope" "Blessed" Paul VI's) first acts to lift the absolute ban on cremation. Wotyla ("Pope" "Saint" John Paul II) enshrined this Masonic practice in his new 1983 Code of Canon Law. Canon 1176, section 3, states, " The Church earnestly recommends that the pious custom of burying the bodies of the deceased be observed; nevertheless, the Church does not prohibit cremation unless it was chosen for reasons contrary to Christian doctrine." (Emphasis mine). And we would know it was chosen for "reasons contrary to Christian doctrine"...how?? The floodgate is open wide. They did the dirty work of their infernal master.

The results are now manifest. In 1963, cremation was virtually non-existent among Catholics. As of 1989 (the most recent statistics I could find) an amazing 26% of all cremations were performed on Vatican II sect members! That's more than one-in-four. I can only imagine what it must be for 2016. I had to shake my head in disbelief and hold back laughter when I read paragraph # 4 of "Cardinal" Muller's decree approved by Frankie:

"In the absence of motives contrary to Christian doctrine, the Church, after the celebration of the funeral rite, accompanies the choice of cremation, providing the relevant liturgical and pastoral directives, and taking particular care to avoid every form of scandal or the appearance of religious indifferentism." (Emphasis mine).  "Avoid religious indifferentism"? You mean like John Paul the Great Apostate did at the Assisi abominations of 1986 and 2002 praying with all the false religions of the world? You mean like Ratzinger ("Pope" Benedict XVI) who gave "communion" to a known Protestant? You mean like Frankie, who tells us "There is no Catholic God"?  What a farce!

Conclusion
The Masonic chickens have come home to roost for Mr. Bergoglio and his worthless "Congregation to Destroy Whatever Remains of The Faith." They are attempting to appease some "conservative" members of the sect who are (rightly) scandalized by the number of cremations, and how the ashes are used. The naturalism of Masonry has been promoted and aided greatly in destroying belief in the resurrection and personal immortality after death. We are seeing the rise of materialism and atheism like never before, and cremation helps that process.

There is an undeniable link between symbolism and one's beliefs. Modernists and Masons understand this all too well. The Novus Bogus "mass" has destroyed all reverence for (what they still call) the Eucharist. Men dress like slobs, and women are dressed not just immodestly, but many times immorally. Anyone can hand out and touch the "consecrated" cracker. You take it from whomever wants to distribute it while standing up and putting it in your hand. The tabernacle is relegated to some hole in the wall, and no one genuflects. According to a study published in America magazine,  37% of Vatican II sect members don't believe in the Real Presence (which, ironically, they don't have anyway).  That's nearly one-in- four, a percentage unthinkable just 52 years ago. They are now believing according to the new rites.

Due to its symbolism, cremation carries with it a new way of thinking about life and death. Man is master of his destiny; an animal just like any other on this planet with no immortal soul or hope of an afterlife. The only goal after being reduced to ashes is to return to "Mother Earth" in anyway that person chooses. When people think this life is all there is and they are just animals, why does it come as a surprise when so many now act that way?