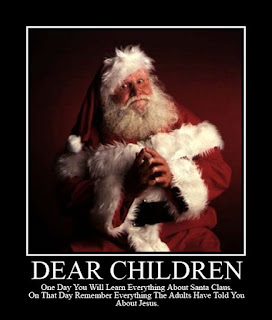 As the Christmas season winds down with the Feast of the Most Holy Family (January 8, 2017), I'm writing to ask Traditionalist parents (if they haven't done so already) to eliminate Santa Claus from their homes, and don't tell their children about it. No, I'm not here to tell you the letters in "Santa" spell "Satan," but I will bring home two points; (1) you must lie to your children multiple times about a fictitious character that you want them to think is real, and (2) it lessens their belief in other things you tell them; like the existence of God. All this for folklore that has nothing to do with the real meaning of Christmas, and serves to make kids materialistic. Just what we need, right?

There is good reason to believe that the modern day Santa, far from being St. Nicholas, is a Masonic ploy to detract from the real meaning of Christmas, just like the Easter Bunny detracts from the most important event in human history; the Resurrection of Jesus Christ. Consider the following carefully.

People calling themselves "Christian" lie to their children about the existence of a supernatural, all-knowing being who is watching them and holding them morally accountable. This "God-surrogate" is an all-seeing person endowed with miraculous powers, who’s making a list and checking it twice in order to find out if you've been naughty or nice. "He knows when you are sleeping; he knows when you’re awake. He knows if you've been bad or good, so be good, for goodness’ sake!" Fear not, however, no matter what you’ve done, he thinks you’re good and delivers the presents. Is this caricature of God something about which you want to lie to your children?

Once they find out that you have lied to them about Santa’s existence, how can doubts not also arise that you have been lying (or wrong) as well in telling them that God exists? Maybe the whole Christmas story is a myth which thinking adults should outgrow. I’ve heard ignorant atheists actually comparing God to Santa Claus and saying that there is no more evidence of God’s existence than Santa’s. In lying to your children about Santa Claus, you may be setting them up for fall. If you think I'm exaggerating, there's at least one high ranking Freemason who agrees.

Gaylord Z. Thomas, a major in the United States Air Force, and a 32nd degree Mason, compares Santa Claus to The Legend of Hiram Abiff. According to Masonic Education (See freemasons-freemasonry.com), Hiram Abiff was comissioned by King Solomon as chief architect and master of works at the construction of his temple. As the temple is nearing completion, three fellowcraft masons from the workforce ambush him as he leaves the building, demanding the secrets of a Master Mason. Hiram is challenged by each in turn, and at each refusal to divulge the information his assailant strikes him with a mason's tool. He is injured by the first two assailants, and struck dead by the last.The assailants are brought to justice, and King Solomon informs the people that the secrets of the Master Mason are now gone. Such is the tale told to Freemasons entering the Third Degree. Masons use the story to show "how Hiram's death was also his triumph--as the resurrection of truth over ignorance is always a victory,..." (See http://www.masonicworld.com/education/articles/THE-IMPORTANCE-OF-THE-LEGEND-OF-HIRAM-ABIFF.htm). It is the triumph of Masonic naturalism ("truth") over the "ignorance" of the Church. Masonry claims to have the truth and will keep it secret (like Hiram Abiff) while seeking to destroy the ignorance of its enemy, the True Church.

Major Thomas now compares this legend to Santa. "Another parallel to Santa can be seen in how Hiram is struck down and how Santa Claus 'dies' in the minds of our youth. Hiram was met at the first principal gate and struck with the Rule, inflicting the first wound. He is struck in the throat, the place of our voice. Is it not by word of mouth from their fellow school children (or siblings) that Santa Claus is also first struck?"

Next, "Hiram was met at the second principal gate and struck a second wound by the Square. He is struck in the chest or heart, the place of our affections. Is it not normally by the word of the parents, those who stand upright in the minds of the child, that the first realization about Santa Claus is confirmed? And doesn't it almost always break their hearts to hear this news? They are growing up."

Finally, "Hiram is met at the third gate, and the final blow by the Setting Maul is dealt to his head, the place of our intellect. Similarly, children aware of the true nature of Santa forcefully kill Santa in the minds of other children by ridiculing, often with blistering logic, those who still believe in Santa." (See http://204.3.136.66/council/journal/dec01/thomas.html). He approves of this "death of Santa."

Almost all children will experience three bad events  from being lied to about Santa Claus by their parents:


Why would any parent do this to a child? The Masons may not have created Santa Claus, but they sure know how to use this myth to dislodge Christ from people's minds; especially the minds of children here in the United States.


Santa: A Fairy Tale Made Analogous To God
Consider these parallels:

So when they stop believing in the lie they were told, maybe they will (consciously or subconsciously) make the connection to disbelief in God and His Only Begotten Son, Jesus Christ.

Don't lie to your children about the existence of a mythical creature with God-like characteristics, and then try to keep Santa's non-existence a secret.  Like in some European countries prior to Vatican II, you can give the gifts on December 6th, the Feast of St. Nicholas. Explain this feast to your children, and keep Christmas strictly religious. Acquaint your children with the historical Saint Nicholas, and most importantly, acquaint them with the historical Jesus. In fact, share with them how Christmas myths like the "little drummer boy" began. Let them know that Jesus wasn't really born on December 25th, but it counters a pagan holiday during the early Church. Let them know Santa isn't real, but unfortunately, some parents have fallen for a Christmas counterfeit that will try some children's faith in God. You can keep giving gifts on Christmas, as long as they know it's in honor of Christ, and in imitation of St. Nicholas. By doing all this, your children will have a stronger, more durable faith as a result.