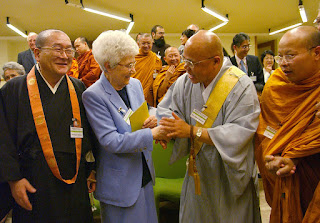 Evil is rampant in the Vatican II sect. Now, more than ever, heresy, blasphemy, and immorality are promoted by Mr. Bergoglio, the sect's current "pope." Recently, Francis made a trip to Fatima for the 100th anniversary of the Blessed Mother's first appearance there on May 13, 1917. At Fatima, he "canonized" Jacinta and Francisco Marto (the two youngest seers) as "Saints." To be clear, I firmly believe that they are saints, but in the absence of a true pope, they (unfortunately) cannot be infallibly declared as such. For those desperate to cling to the delusion that Francis is "pope," they will cite this event as "proof " of his orthodoxy. John Paul II (Wojtyla) was most emphatic in his "Marian devotion." He made sure to mention the Blessed Mother several times before writing or speaking his latest heresy to ensure that gullible "conservative" members of the sect would think him "holy," and keep in union with him. These usurpers of the See of Peter use what Pope St. Pius X called a "false and lying devotion" to the Blessed Virgin Mary, and attempt to cloak the evil they do under the guise of Marian piety.

If you really want to see what the false pontiffs of the Vatican II sect think of Mary, look no further than the so-called Focolare Movement. It is also known as Opera di Maria or Work of Mary. Operating with the full backing of the Modernist Vatican, many people don't know of its existence, let alone the heretical motives and teachings of this group. This post will expose the origin and aims of Focolare, and in so doing, the evil of the post-Vatican II "popes," done in the name of Mary, will also be laid bare.

The founder of the Focolare Movement is Chiara Lubich (1920-2008). Born Silvia Lubich in Trent, Italy, she was the daughter of a Socialist father, who was unable get work under Fascist rule. She worked hard to put herself through college and became an elementary school teacher.  When Trent was under siege during the bombings of World War II, Lubich and a couple of close friends were reading the Bible. Lubich experienced what she described as a "strong religious experience" and on December 7, 1943 changed her name to "Chiara" (i.e., "Clare") after St. Clare of Assisi. This date is considered the founding of the Focolare Movement (the name Focolare means "hearth" in Italian, but it is officially known by the Vatican II sect as "The Work of Mary").

The Work of Mary (hereinafter "WOM")was given this name because of its alleged link with the Blessed Virgin Mary, the Mother of Christ. Lubich and her friends decided to give this lay movement the interesting motto, "Unity or Death." They wanted to contribute to peace and to achieve the evangelical unity of all people in every social environment. The goal became a world living in unity. It began with this benevolent sounding intention to attract followers. The Modernist theologian, Fr. Pasquale Foresi, became friends with Lubich and helped to shape the group, as did Igino Giordani, a left-wing Italian politician and ecumenist.  They were careful not to draw attention to themselves in the early days of their cause. By using benign sounding phrases and always speaking in general terms, the WOM seemed to be dedicated to uniting all people in the Church. Its true aims wouldn't become clear until 1961 under Roncalli ("Pope" John XXIII).

The WOM began their ecumenical dialogue in 1961 and have forged ties with Jews, Buddhists, Mohammedans, Hindus, and others.

From the WOM (or Focolare) website: Our goal: The Movement aims to make a real contribution to breaking down the walls that separate the Churches removing prejudices and providing the space where the different types of ecumenical dialogue  can bear fruit. This ‘dialogue of life’ enables Christians to give witness to the possibility of living together.

The foundation is the Gospel lived under the light of the spirituality of unity, the specific spirituality of the Focolare. Christians from the various Churches, living this spirituality, feel the need to recognize and deepen common patrimony and to also value the sources of spiritual life that are found within the different Churches. The novelty lies in that all feel they are part of a family and are linked by the commandment of Jesus: “I give you a new commandment: love one another; as I have loved you, so you are to love one another. If there is this love among you, then all will know that you are my disciples.” (Jn13,34)

Abject ecumenism: In 1977, in London, Chiara Lubich was awarded the Templeton Prize for progress in religion. She presented her experience before leaders of different religions and had the deep sensation that everyone present, although from different faiths, were like a single family. As she left, it was precisely the people from other religious traditions (Buddhists, Muslims, Jews, Sikhs, Hindu, etc.) who were the first to step up and offer their warm congratulations. This appeared to be evidence that the spirituality of the Movement could be shared not only by Christians, but, to some measure, even with persons of other faiths. For Chiara, these events were a sign from God, showing that the Movement had to open itself to this dialogue with the people of all religious traditions.

On the Jews: Dialogue with the Jews is especially important to Christians. John Paul II spoke of them as our "elder brothers", and Benedict XVI’s "fathers in the faith" further highlighted the deep bond between Christians and Jews.

On Islam: This path of discovery between the spirituality of unity and Islam has had some noteworthy moments: the meeting for Muslim friends held in 2008 in Rome, Italy which was entitled “Love and Mercy in the Bible and in the Holy Koran”. The presentation by Muslim Professor Adnane Morkrani, entitled “Reading the Koran with the Eye of Mercy” was very much appreciated by the Imam and Muslims who were present.

On atheists, agnostics, and other modern day heathens: By the end of the 70s the Movement spread beyond the confines of church and a natural dialogue opened up with agnostics, atheists and people indifferent towards religion. The rapport between all was such that each felt free to express their thoughts certain that unity also means having profound respect for the person, his dignity, identity, culture and needs as well as what he believes in. (All above quotes taken from http://www.focolare.org/)

Their goal is simple: A one-world, dogma-free religion based on a Modernist notion of "love."


What the One True Church Teaches

On True Unity---Pope Gregory XVI (Mirari Vos # 13): Now We consider another abundant source of the evils with which the Church is afflicted at present: indifferentism. This perverse opinion is spread on all sides by the fraud of the wicked who claim that it is possible to obtain the eternal salvation of the soul by the profession of any kind of religion, as long as morality is maintained. Surely, in so clear a matter, you will drive this deadly error far from the people committed to your care. With the admonition of the apostle that "there is one God, one faith, one baptism" may those fear who contrive the notion that the safe harbor of salvation is open to persons of any religion whatever. They should consider the testimony of Christ Himself that "those who are not with Christ are against Him," and that they disperse unhappily who do not gather with Him. Therefore "without a doubt, they will perish forever, unless they hold the Catholic faith whole and inviolate. (Emphasis mine).

On Respecting All Faiths---Pope Leo XIII Custodi Di Quella Fede #15): Everyone should avoid familiarity or friendship with anyone suspected of belonging to masonry or to affiliated groups. Know them by their fruits and avoid them. Every familiarity should be avoided, not only with those impious libertines who openly promote the character of the sect, but also with those who hide under the mask of universal tolerance, respect for all religions, and the craving to reconcile the maxims of the Gospel with those of the revolution. These men seek to reconcile Christ and Belial, the Church of God and the state without God. (Emphasis mine)

On the Jews---Pope St Gregory the Great, Sunday Sermons of the Great Fathers 1:92 If we because of our faith in Christ are deemed children of Abraham, the Jews therefore because of their perfidy have ceased to be His seed. (Emphasis mine)

On Islam---Pope St Pius V, Salvatoris Domini: ...[Moslems] are the enemy of the Catholic faith.

On Atheists and Agnostics---Vatican Council I (1870): 1. If anyone shall say that the One True God, our Creator and Lord, cannot be certainly known by the natural light of human reason through created things; let him be anathema.

Focolare is No Work of Mary

The Blessed Mother gave us Christ Who is Truth Itself. It is both blasphemous and inconceivable that she could approve such lies present in the teachings and works of Chiara Lubich and the WOM. It is evident that it comes from the father of lies, and this movement spreads the gravest of errors. Yet, what did the Vatican II "popes" have to say about WOM?

The Focolare Movement is the work of Satan and his minions; the Modernists and Masons. It has nothing to do with the Blessed Virgin Mary and everything to do with hiding behind her glorious name to advance a wicked agenda of a One-World Ecumenical Religion. Don't be fooled by "Rosary rallies," Fatima "canonizations," and flowery sermons on Mary. No one can, for example, pray the Rosary and claim to honor Mary if they then attend the Novus Bogus "mass" that makes an invalid, sacrilegious mockery of her Divine Son's unbloody Sacrifice of the Cross.

Likewise, don't be fooled by "popes" who speak sweetly of Mary and then promote a movement named after the Blessed Mother which seeks to undermine her Divine Son and His One True Church. True unity of faith is only achieved by converting everyone to the True Catholic Church, outside of which no one can be saved. The "unity" of Lubich and her wicked disciples is one where the truth is forsaken. The motto initially adopted by the WOM was "Unity or Death." It should be, more aptly, "False Unity AND Eternal Death in Hell."
Posted by Introibo Ad Altare Dei at 2:15 AM