The Father Of Modern Perversity 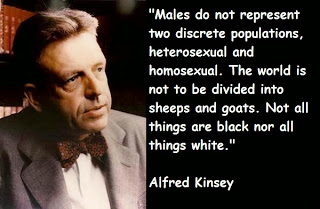 On September 27th, the "Father of Pornography," Hugh Hefner, died at age 91. The founder of Playboy magazine contributed to the corruption of countless minds, bodies, and souls. He has now gone to Judgement. I would hate to imagine the fate that wretch most likely received. As bad as Hefner was, the pornography industry, and all the other pagan evils that afflict modern society--from sodomite "marriage" to "transgender bathrooms"--come to us not from Hefner, but Dr. Alfred Kinsey. Indeed, Playboy and the other pornographic magazines wouldn't have been nearly as successful or pervasive if it had not been for Kinsey and his pseudo-scientific "research." A 2004 movie entitled Kinsey, staring Hollywood superstar Liam Neeson makes Kinsey a "hero" by omitting or glossing over his morally reprehensible actions (e.g., sexual abuse of children in his studies that were filmed) and by sending the message that those who believe in traditional morality are "repressed" and suffering from some emotional/mental illness as a result.

The truth behind the man Kinsey and his work will be examined in this post.

Alfred Charles Kinsey (b. 1894), was raised the son of a strict Methodist Sunday School teacher. He went to Bowdoin College where he majored in zoology, and developed a fascination with insects. He continued his studies at Harvard after graduation. He eventually severed all ties with his parents, and declared himself an atheist. Some of his biographers portray him as shy and disinterested in sex, but later biographers unearthed Kinsey's personal correspondence, wherein it was revealed he was a bisexual with a strong sexual desire for young boys.

His career as a "sexpert" began when the Association of Women Students at Indiana University (where he taught zoology/biology) asked him to teach a marriage course on human sexuality for engaged and married students. Kinsey went to great lengths to keep his personal dark predilections a secret. When Ralph Voris, one of his best friends, died, Kinsey drove from Indiana to Ohio with his wife Clara. He had a wife and kids as a "cover" for his deviance. Once in Ohio, he removed correspondence from Voris' office in which Kinsey brags to Voris about his collection of "gorgeous" photos of homosexual men.

Kinsey revolutionized the world with the publication of his books Sexual Behavior in the Human Male and Sexual Behavior in the Human Female (published in 1948 and 1953, respectively). It was based on 350 questions on a questionnaire that asked such things as when (not if ) the interviewees had participated in sado-masochism, homosexual acts, pedophilia, and bestiality. His assistants, Clyde Martin, Paul Gebhard, and Wardell Pomeroy, were all required to be filmed performing sex acts with others either at the university or in the attic of the Kinsey home.

The questions were so sick, that most of the respondents were either those who engaged in unnatural sex acts or were incarcerated sex offenders. The peer-reviewed medical journal The Lancet decried the research as having "questioned an unrepresentative proportion of prison inmates and sex offenders in a survey of normal sexual behavior." In a 1992 telephone interview, Paul Gebhard, one of Kinsey's assistants, admitted that some of the men interviewed were convicted pedophiles. They would ask them how many children they had "done it with," the child's age, and whether or not they thought the child had come to climax. He further admitted that he was aware of the child abuse inherent in Kinsey's work. Kinsey even had help from Nazi pedophile Dr. Fritz Van  Balluseck who contributed to Kinsey from 1936-1956. Not only did Von Balluseck rape his own daughter, he raped the eleven-year-old son of a minister and forced the boy to write down his experience for Kinsey. Van  Balluseck was tried in Berlin in 1957 for the murder of a ten-year-old girl, Loiselotte Has.

Kinsey was supported by the American Civil Liberties Union (ACLU), and one of the organizations founders, attorney Morris L. Ernst. With the help of influential people, and by covering up much of how the data had been both manipulated and obtained, eleven renowned intellectuals supported Kinsey's work. They bought his "bill of goods" that he was a genuine scientist with factual data wanting to dispel myths about a hitherto taboo subject.

All information presented in this post is taken from the work of Dr. Judith Reisman, Kinsey: Crimes and Consequences (Crestwood, KY:The Institute for Media Education, [2000]). Dr. Reisman meticulously documents all the sources and references. I highly recommend the book to anyone wishing to find out more.

Alfred Kinsey was the "Father of Modern Perversity." Once unnatural behaviors were regarded as "normal" the societal disapproval of them was transformed into tolerance, and finally, acceptance. It has come to the point where you can choose your own "gender identity" and share bathrooms with people who have different genitalia.

The only force that could have prevented the flood, the Roman Catholic Church, was driven underground by the emergence of the Vatican II sect.

Bergoglio is following in Kinsey's footsteps by giving "communion" to adulterers. It makes sense that someone who says "Who am I to judge?" and "Atheists can go to Heaven" would push the agenda of an atheistic sexual pervert like Alfred Kinsey.
Posted by Introibo Ad Altare Dei at 2:32 AM