The Glories Of St. Joseph 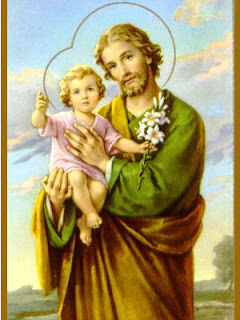 As this post will be published on Christmas Day, I wish all of my readers a Blessed Nativity of Our Lord, and God's blessings throughout 2018. While I was meditating about Christmas this Advent, it occurred to me that the one person that seems to get the least recognition is the great St. Joseph, foster-father of Jesus Christ. There are Christmas hymns and carols that exalt Our Lord, Our Lady, and even the Magi--but not St. Joseph. St. Joseph, being the exemplar of humility, is no doubt happy that this is the case. However, in this week's post, I wish to bring to everyone's attention the glory that rightfully belongs to St. Joseph, and encourage all to be more devoted to him.


Patron of the One True Church

On the feast of the Immaculate Conception, December 8, 1870, Pope Pius IX decreed that St. Joseph was to be made Patron of the Catholic Church, and raised his feast day (March 19) to the rank of Double of the First Class. The decree Quemadmodum Deus, was published by the Sacred Congregation of Rites, and the text at the end seems like it could be written especially for our times:

On account of this sublime dignity which God conferred on His most faithful Servant, the Church has always most highly honored and lauded the Most Blessed Joseph next after his spouse, the Virgin Mother of God, and has implored his intercession in all her great necessities.

And now that in this most sorrowful time the Church herself is beset by enemies on every side and oppressed by heavy calamities, so that impious men imagine that the gates of hell are at length prevailing against her, the Venerable Prelates of the whole Catholic world have presented to the Sovereign Pontiff their own petitions and those of the faithful confided to their care, praying that he would vouchsafe to constitute St. Joseph Patron of the Catholic Church.

Moreover, when at the Sacred Ecumenical Council of the Vatican they renewed still more fervently this their petition and prayer, Our Most Holy Lord, Pius IX, Pope, moved thereto by recent deplorable events, was pleased to comply with the desires of the Prelates, and to commit to the most powerful patronage of the Holy Patriarch Joseph both himself and all the faithful and solemnly declared him Patron of the Catholic Church, and commanded his festival, occurring on the 19th of March, to be celebrated as a double of the first class, but without an octave on the account of Lent.

Patron of A Happy Death

St. Joseph has always been venerated as the Patron of a Happy Death, i.e., a death in the state of sanctifying grace assuring us of Heaven. There are three very good theological reasons for so designating St. Joseph:

There are several great privileges that many pre-Vatican II theologians believed could rightfully be ascribed to St. Joseph. Since the Great Apostasy, these issues cannot be decided. One of the leading "Josephite theologians" was the great Fr. Francis Filas. Theologian Filas was Chairman of the Theology Department at Loyola University in Chicago. He had published five books and twenty-four (24) scholarly articles on St. Joseph. The Oratory magazine lauded him as "one who has probably said more about St. Joseph than any other man in history." I have compiled the material below, about the most recent (pre-Vatican II) theological opinions on St. Joseph from the book St. Joseph and Daily Christian Living, The McMillan Company, NY, [1959], by theologian Filas.

1. St. Joseph Pre-Sanctified in the Womb
Joseph's holiness as second only to the Blessed Virgin Mary, goes hand in hand with his dignity. The theology of St. Joseph begins on the basis that his dignity surpasses all humans except the human nature of Jesus Christ and the Blessed Mother. The reason for this principle lies in God's providential choice of the Saint as the virginal husband of the Mother of God, and as Foster-Father of the God-Man Jesus Christ. His intricate closeness to Jesus and Mary means he was privileged above all other men.

In the 15th century, certain theologians began to discuss whether or not Joseph was conceived without Original Sin. By the early 19th century, it was admitted by all he was not, and the dogma of the Immaculate Conception as a unique privilege of Mary confirms this conclusion. The theologians' opinion had evolved to claiming that St. Joseph was pre-sanctified in his mother's womb, just as is commonly taught regarding St. John the Baptist who "leaped for joy" in St. Elizabeth's womb when the pregnant Virgin Mary visited.

As there should be complementary virtues between spouses, it befits St. Joseph's vocation to have been pre-sanctified. St. Joseph is so intimately linked to the absolute purity of heart that existed in Jesus and was mirrored so faithfully in the Immaculate Heart of Mary. If Joseph had sinned at any time in his life, even in the slightest degree, this would have been a disgraceful flaw in one so close to God. It is therefore piously believed that St. Joseph was freed from Original Sin in his mother's womb, and never committed any actual sins, mortal or venial for his entire life.

Some object that only St. John the Baptist received this grace because Christ said, "Amen I say to you, there hath not risen among them that are born of women a greater than John the Baptist: yet he that is the lesser in the kingdom of heaven is greater than he." (St. Matthew 11:11). The theologians teach that Christ was using hyperbole to make a point that John's holiness was truly great. If we were to take Christ's words literally, that means St. John would be greater in holiness than either the Blessed Virgin Mary and even Jesus Himself, both born of a woman. This conclusion is manifestly false.

St. Luke 7:28, gives a more faithful rendition of those words, "For I say to you: Amongst those that are born of women, there is not a greater prophet than John the Baptist. But he that is the lesser in the kingdom of God, is greater than he." In the absence of Magisterial authority to decide the issue, all we can say is if  this privilege was necessary and fitting to St. Joseph for his great vocation, then God bestowed it upon him. Beyond this point, we cannot go.

Whereas the Immaculate Conception was a privilege unique to Mary, her Assumption was not.  A rather enigmatic text in the Gospel of St. Matthew (27:52) implies that at the resurrection of Christ, there were other bodies that rose from the dead united with their souls. "And the graves were opened: and many bodies of the saints that had slept arose,.." This would imply the Old Testament "saints" who achieved salvation (i.e., Isaiah). There are some theologians that teach these people had to die again, but there are difficulties with this opinion. If reception of Christ's Body, Blood, Soul, and Divinity in the Eucharist is a pledge of our future resurrection, how much more so should be the pledge for the man who protected and loved Him as He grew into Manhood? Should he not be given an anticipated resurrection and be united (body and soul) with Jesus and Mary in Heaven? Theologian Filas calls the Assumption of St. Joseph "a probable theological opinion."


The Honors Bestowed on St. Joseph by the Church


Conclusion
In a world of dead-beat dads, single parent homes, and sodomite "marriages," we need St. Joseph's example of what true fatherhood and being a real husband is all about. In the time of the Great Apostasy, let us not fail to call upon him to see us through. Wear the Cord of St. Joseph, use St. Joseph's Oil, pray the Chaplet of St. Joseph and the Litany of St. Joseph (especially on Wednesdays, during March, and on his feast day) for all your spiritual and temporal needs.

Posted by Introibo Ad Altare Dei at 3:59 AM