The Source Of The Problem 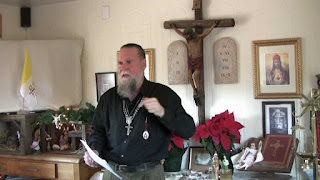 In the more than four years that I have been regularly posting on this blog each week, I have communicated with all kinds of ersatz "Traditionalists." While the large majority of my readers are good people trying to be loyal to the Church in this age of near universal apostasy, there nevertheless remain those that exemplify what was meant by the prophet Zechariah when he wrote, "Strike the shepherd, and the sheep shall be scattered..." In a time of prolonged sedevacantism, people go far astray without a true pope. I have thought quite a bit about the unusual groups that have emerged posing as faithful Traditionalist Catholics in the wake of Vatican II. I have identified the basic groups and what I believe is the underlying source of the problem. Despite their claims that they are the true remnant, most wind up placing themselves outside the One True Church. First, the groups:

To make matters more confusing, there are more groups, but these are the vast majority out there. Some people are not easy to pigeon-hole because they can fall into more than one group, such as the former Protestant minister, Gerry Matatics, who used to be both a Feeneyite and a Home Aloner, but is now just Home Alone giving "courses" regarding every subject under the sun on Facebook. You could also be a Science-Denier and a Vacancy Pusher, or an Apparitionist and a Conclavist.

So what's causing these pseudo-Traditionalist groups? All of them either do not understand, or willfully reject, the Magisterium of the Church. As a result, they get things seriously wrong, and most place themselves outside the Church. The purpose of this post will be, therefore, to give a proper exposition of what the Magisterium really is, and what we must believe. I will also answer common objections to the proper role of the Church's Magisterium. In so doing, I will also point out how some groups got it wrong. Nothing that will be written below is mine; I take credit for nothing. It is the teaching of the One True Church Herself. It is my hope that by understanding the teaching authority of the Church, you will never fall into these errors, and maybe this post will give you the ammunition necessary to rescue friends and family that have, unfortunately, fallen victim to them.

1. What is the Magisterium? According to theologian Parente, it is "the power conferred by Christ upon His Church and strengthened with the charism of infallibility, by which the teaching Church (Ecclesia docens) is constituted as the unique depository and authentic interpreter of divine revelation to be proposed authoritatively to men as the object of faith for their eternal salvation." (See Dictionary of Dogmatic Theology, The Bruce Publishing Company, Milwaukee, [1951], pg. 170). Therefore, the Church is divinely appointed to teach all necessary truths of faith to people, free from error, in order that they may attain Heaven. "Magisterium" comes from the Latin magister or "teacher." Christ told His Apostles "Go therefore, teach ye all nations..."(St. Matthew 28:19).

2. What constitutes the Magisterium? According to theologian Van Noort: "The subject-matter of divine- Catholic faith are all those truths proposed by the Church's Magisterium for our belief as divinely revealed...The principle laid down above is contained almost verbatim in this declaration of the [First] Vatican Council: 'Further, all those things are to be believed with divine and catholic faith which are contained in the Word of God, written or handed down, and which the Church, either by a solemn judgment, or by her ordinary and universal Magisterium, proposes for belief as having been Divinely-revealed.' [Dogmatic Constitution on the Catholic Faith]" (See Dogmatic Theology, Newman Press 3:220-221[1960]; words in brackets and emphasis are mine).

The Magisterium, therefore, is expressed either solemnly or in an ordinary and universal way. This is clear from both Church history and the dogmatic decree of the First Vatican Council (1870).  The former exercise of the Church's teaching authority is called the Solemn or Extraordinary Magisterium and the latter is called the Universal and Ordinary Magisterium ("UOM"). Both are equally infallible.

3. The Extraordinary Magisterium. As theologian Van Noort writes, the Extraordinary Magisterium is comprised of: "(a) definitions made by the pope speaking ex cathedra; (b) definitions made by particular councils which have either been ratified by the pope in solemn form, or accepted by the universal Church. The term 'definition' covers creeds and professions of faith which have been edited or solemnly approved by the supreme Magisterium of the Church." (Ibid, pg. 221). However, this is not the usual way the Church teaches us, hence it is called "extraordinary." The purpose of infallible definitions made solemnly is to confirm what has already been taught by the UOM when brought under attack by heretics. For example, the heresiarch Arius was already considered a heretic for denying the Divinity of Christ (taught by the UOM) before the solemn definitions at the Ecumenical Council of Nicea in 325 A.D.  Martin Luther was likewise considered a heretic for denying the Mass was a real Sacrifice, and teaching justification by faith alone, before the condemnations of the Ecumenical Council of Trent. Exactly what, then, is the UOM?

4. The Universal and Ordinary Magisterium Explained. According to theologian Scheeben, "The Criteria, or means of knowing Catholic truth may be easily gathered from the principles...nearly all set forth in the Brief Tuas Libenter, addressed by Pius IX to the Archbishop of Munich." (See A Manual of Catholic Theology 1:89). Pope Pius IX wrote, ""For even if it were a matter concerning that subjection which is to be manifested by an act of divine faith, nevertheless, it would not have to be limited to those matters which have been defined by express decrees of the ecumenical Councils, or of the Roman Pontiffs and of this See, but would have to be extended also to those matters which are handed down as divinely revealed by the ordinary teaching power of the whole Church spread throughout the world, and therefore, by universal and common consent are held by Catholic theologians to belong to faith." Pope Pius IX, Tuas Libenter (1863),DZ 1683 (Emphasis mine)

Again the Supreme Pontiff writes, "But, since it is a matter of that subjection by which in conscience all those Catholics are bound who work in the speculative sciences, in order that they may bring new advantage to the Church by their writings, on that account, then, the men of that same convention should realize that it is not sufficient for learned Catholics to accept and revere the aforesaid dogmas of the Church, but that
it is also necessary to subject themselves to the decisions pertaining to doctrine which are issued by the Pontifical Congregations, and also to those forms of doctrine which are held by the common and constant consent of Catholics as theological truths and conclusions, so certain that opinions opposed to these same forms of doctrine, although they cannot be called heretical, nevertheless deserve some theological censure." Tuas Libenter (1863), DZ 1684.

Van Noort explains: "Clearly if a truth is capable of being declared an object of divine-catholic faith through the force of this ordinary and universal teaching, there is required such a proposal is unmistakably definitive........The major signs of such a proposal are these: that the truth be taught throughout the world in popular catechisms, or even more importantly, be taught by the universal and constant agreement of theologians as belonging to faith." (Van Noort, Ibid, pg. 222; Emphasis mine).

Canon 1323 of the 1917 Code of Canon Law further gives proof of the belief of the Church regarding the UOM and imposes on the faithful the obligation of consent. The eminent canonist Augustine writes, "The universal and ordinary Magisterium consists of the entire episcopate, according to the constitution and order defined by Christ, i.e., all the bishops of the universal Church, dependently on the Roman Pontiff...What the universal and approved practice and discipline proposes as connected with faith and morals must be believed. And what the Holy Fathers and the theologians hold unanimously as a matter of faith and morals, is also de fide." (See A Commentary on Canon Law, pg.327)

Finally, a great summary by theologian Scheeben, "Although the assistance of the Holy Ghost is not directly promised to theologians, nevertheless the assistance promised to the Church requires that He should prevent them as a body from falling into error; otherwise the Faithful who follow them would all be lead astray. The consent of the theologians implies the consent of the Episcopate, according to St. Augustine's dictum, 'Not to resist an error is to approve of it---not to defend a truth is to reject it.'" (Scheeben, Ibid, pg. 83).

Remember, too, what constitutes an "approved theologian": Clerics of eminent learning, and orthodoxy in doctrine, at least as insofar their writings are used by the faithful and in seminaries, with the knowledge of (and with no opposition from) the hierarchy and the Holy See. (See, e.g,. theologian Salaverri, Sacrae Theologiae Summa, IB, [1955]).

The Two Errors Inherent in the Pseudo-Traditionalist Groups

I) Reject all teaching except infallible pronouncements from popes and Ecumenical Councils. Here, they jettison most Church teaching. They even (ironically) reject the infallible pronouncement of the First Vatican Council that the UOM is infallible! This is akin to ripping out more than half the pages of a book and expecting to get the story correct. It's not happening.

II) Only accept those infallible pronouncements from the popes and Ecumenical Councils according to their private interpretations, and reject the teaching of the approved theologians which is how the Church teaches us through Her Universal and Ordinary Magisterium, as infallibly defined at the Vatican Council (1870).Theology, like law or medicine, is a science. As such, it is handled by professionals trained and overseen by Holy Mother Church. A layman attempting to interpret a dogma is like a non-physician trying to "diagnose himself" on WebMD or a non-lawyer attempting to defend himself in court. Would you want to entrust your possible loss of liberty to a non-lawyer's advice? Would you let a non-surgeon operate on you and risk death? Of course, no rational person would do this, yet some Traditionalists will risk their eternal salvation by trusting in wannabe "Benedictines" with no formal ecclesiastical education and training, or a "pope" who was "elected" by his parents on their Kansas farm.

Conclusion
The Feeneyites, and the other pseudo-Traditionalist groups suffer from what a friend of mine called a "sickness of soul." I agree. The sickness comes from a rejection of the authentic Magisterium. They fall into every imaginable error and, unfortunately, make Traditionalists look strange (at best) and deranged (at worst). Almost all of them (with very few exceptions) are uncharitable boors. I could retire a wealthy man right now if I had a dime for every time they resort to ad hominem attacks calling me (and anyone else who does not agree with every jot and tittle they profess) "liars," "apostates," etc. Then again, when you don't have facts or logic on your side, name-calling is all that's left to do. Please remember how the Church teaches us, and avoid the source of the problem that makes you "Traditionalist Catholic" in name only.