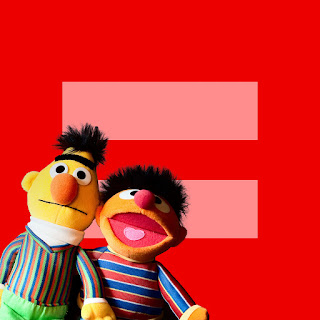 If anyone doesn't think there is an agenda being pushed by the media, the Vatican II sect, and the elitists in power to normalize deviant behavior, think again. An online magazine for sodomites, Queerty, published an interview with one Mark Saltzman, who was a scriptwriter and songwriter for the children's educational TV show Sesame Street beginning from 1981 to 1990. During the interview, Saltzman declared that two puppets (often referred to as "muppets"), Bert and Ernie, were homosexual lovers. Saltzman said he was writing them as a couple and basing their interactions on his own experiences with his sodomite lover, Andrew Glassman, who died in 2003.

The producers of Sesame Street put out the following statement in response: "As we have always said, Bert and Ernie are best friends. They were created to teach preschoolers that people can be good friends with those who are very different from themselves. Even though they are identified as male characters and possess many human traits and characteristics (as most Sesame Street Muppets do), they remain puppets, and do not have a sexual orientation." (See https://www.nbcnews.com/feature/nbc-out/bert-ernie-are-gay-couple-sesame-street-writer-claims-n910701).  Immediately, there was a backlash against the producers, accusing them of being "homophobic." Check out the following:

Who really cares about the alleged sexuality of puppets, and why am I writing about something that seems so ridiculous? This isn't about puppets but about something far more sinister: The push by the forces of evil to have homosexuality and the entire "LGBT" perversion accepted, and they are targeting your children. A quick background is in order. Sesame Street debuted in 1969, showing colorful characters and puppets designed to teach basics, such as the ABC's, and also emphasize character education on topics including such things as the importance of being nice to your friends and sharing. I watched the show myself as a small child in the early 1970s. Two of the most famous of the puppets were "Bert and Ernie" meant to be best friends. Saltzman did not write for the show until the 1980s, which gives the lie to his contention that the puppets were modeled after his sodomite lifestyle. A 1996 survey found that 95% of all American preschoolers had watched the show by the time they were three years old. In 2008, it was estimated that 77 million Americans had watched the series as children.

This post will focus on what the empirical evidence reveals about homosexuality, and how this evidence is in perfect accord with Church teaching. You will see why homosexuality is one of the Four Sins That Scream to Heaven for Vengeance, and what the demonic forces are trying (very successfully) to get you and your children to accept. Lastly, I will give some suggestions on how to turn the tide. WARNING!! This post contains material that is extremely graphic, and may be found very disturbing. Reader discretion is advised.


The top six American male serial killers were all homosexual:

The pathology of eating one’s sexual victims also characterized Milwaukee’s Jeffrey Dahmer in 1992. He not only killed 17 young men and boys, but cooked and ate their body parts. The association between serial murder and homosexuality isn’t recent. Two gays compete for the spot of “world’s worst murderer.” During the Nazi reign of terror, Auschwitz executioner Ludwig Tiene strangled, crushed, and gnawed boys and young men to death while he raped them. Though his grand total is uncertain, he often murdered as many as 100 a day. Gilles de Rais (Bluebeard) brutally destroyed the lives of 800 boys. Each lad was lured to his home, bathed and fed. Just as the poor boy thought "this is my lucky day," he was raped, then killed by being ripped or cut apart and either burned or eaten. Even if the "10% of the population" is homosexual/bisexual were true, murder is disproportionately high among sodomites.

A study of 518 sexually-tinged mass murders in the U.S. from 1966 to 1983 determined that 350 (68%) of the victims were killed by those who practiced homosexuality and that 19 (44%) of the 43 murderers were bisexuals or homosexuals (See Cameron, Dr. Paul,  [1983] "Is homosexuality disproportionately associated with murder?" Paper presented at Midwestern Psychological Assn Chicago.) Lesbian Aileen Wuornos laid claim in 1992 to "worst female killer" with at least 7 middle-aged male victims. She single-handedly topped the lesbian nurse team of Catherine Wood and Gwen Graham, who had killed 6 convalescent patients in Grand Rapids, Michigan.

Jim Warren, who worked as a counselor at the Washington State Corrections Center, did the intake interview for almost all the younger murderers (i.e., under age 36) in the state of Washington from 1971-82 (during the growth of the so-called "gay rights movement"). He was "probably the only one who examined the entirety of each of their case files." Warren testified that he was struck with how frequently homosexuality turned up in the cases (See Warren, J,  [1989] Testimony before the Law and Justice Committee of the Washington State Senate December 15).

The data supports that most violence comes from within the sodomite lifestyle and gets exported. It does not come mostly from the outside against them. Homosexuals are a danger to society, not the other way around. The FBI reported 431 hate crimes against homosexuals for the U.S. in all of 1991. Only one was "confirmed" for Washington, D.C. — yet D.C. gay activists claimed 397 incidents! When pressed, they admitted that at least 366 of these "crimes" consisted of "verbal harassment." (See Washington Blade (1993) "FBI releases stats on hate crimes." January 1, pg.1).


Homosexuality and Mortality Rate
A study was conducted in Vancouver British Columbia and published in 1997 in the International Journal of Epidemiology (Vol. 26, 657-61: http://ije.oxfordjournals.org/cgi/content/abstract/26/3/657).

Pro-sodomite researchers actually tried to debunk the assertion that homosexuality is infested with disease and shortens the life expectancy of both male sodomites and lesbians. Despite their attempts to downplay the practical consequences of their research, it is difficult to ignore that the study concluded with the statement that "under even the most liberal assumptions, gay and bisexual men in this urban centre [Vancouver, BC] are now experiencing a life expectancy similar to that experienced by all men in Canada in the year 1871." Much to their chagrin, the study revealed "life expectancy at age 20 years for gay and bisexual men is 8 to 20 years less than for all men."

Homosexuality and the Vatican II sect
According to the book The Changing Face of the Priesthood by Vatican II sect "priest" Donald  Cozzens (published by The Liturgical Press in the year 2000), sociologist James G. Wolf's research concludes 48.5% of priests and 55.1% of seminarians were homosexuals. The percentage is highest among "priests" under age 40, which in Wolf's research (published in 1989), would mean those born in and after 1950, with "ordinations" taking place in/after 1974 after the Modernists opened the floodgates to admit sodomites. Cozzens reports the number of sexually active homosexuals in the Vatican II "priesthood" was a full-fledged "network" of perverts. This is all the more alarming, as Cozzens is sympathetic to the sodomites.

Homosexual Practices
Warning!! The following is EXTREMELY GRAPHIC AND DISTURBING. READER DISCRETION ADVISED.
Homosexual Recruitment of Children
All areas of society are advocating the normalization of homosexuality, and even encouraging it, among children.

In the media and pop culture:
Conclusion: We Must Turn the Tide or Society Will Collapse

Without reference to God's Law (or even Natural Law), the homosexual lifestyle has been shown by empirical evidence to be unhealthy physically and emotionally. Homosexuals are disproportionately violent, child molesters, disease-ridden with shortened life spans, and counterproductive to society. Furthermore, they want your children to join in their wicked ways. Those who oppose them are "homophobic" (implying a mental disorder for being moral and/or Christian) and are subjected to harassment, social ostracism, loss of job, and discrimination charges.

In my opinion, the United States (and all countries) should adopt the proposed anti-sodomy legislation introduced in Uganda four years ago. First, we need a Constitutional amendment declaring marriage to be a union of one man and one woman, and declaring homosexual conduct as criminal conduct that may be proscribed by law. (This would overturn all U. S. Supreme Court decisions to the contrary, beginning in 2003).

All other homosexual acts constitute "the offense of homosexuality," and if convicted will bring a mandatory seven years in prison. The APA will once more recognize homosexuality as a personality disorder, and conversion therapy will not only be permitted, but mandated for those who profess same sex attraction. Lastly, all public promotion of homosexuality by a corporation or educational institution shall be subjected to large fines. Sound draconian? Not if you realize the very foundation of our civilization is at stake. The Vatican II sect aids and abets the sodomite agenda. Of course, the ultimate answer is the restoration of the Church and Catholic countries as existed prior to Vatican II. While we pray and try to convert others, we must use whatever secular means we have at our disposal to sway public opinion and elect anti-sodomite, pro-family politicians.  If we don't, you shouldn't be surprised when you see a child holding pink Bert and Ernie dolls, while singing, "Can you tell me how to get...how to get to Sodomy Street?"
Posted by Introibo Ad Altare Dei at 12:27 AM