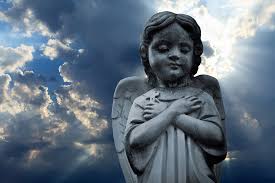 Baptism is necessary for salvation. Every Traditionalist Catholic believes this as it has been defined by the Church.  However, what of the fate of unbaptized infants and those unborn who die in the womb? What of the severely retarded and habitually insane (born that way)? The Church teaches that these people go to Limbo,  a state of natural happiness, yet deprived from all eternity of the Beatific Vision of God. They suffer poena damni (pain of separation), but not poena sensus (pain of sense). In this post, I wish to explore the possibility, taught by some theologians, that the unbaptized in these cases (I'll refer to them all as "unbaptized infants"--if not in age, "infant-like" as they have no use of reason) might be able to achieve salvation (at least in some cases) instead of Limbo.  The study of this subject is fascinating, and the overview of the question comes from theologian Dyer's work, Limbo: Unsettled Question. It was written in 1962-63, just prior to the Great Apostasy.

I want to make it clear, yet again, that I have no Magisterial authority, and I'm neither a theologian or canonist (nor have I ever claimed such). I was really intrigued by the theological theory, and hold it as plausible. As every Traditionalist must, I stand willing to submit to Holy Mother Church in all things. Should a pope be restored, I shall adhere to his decisions in this, and all other matters of Catholic Faith and morals without reservation.


St. Augustine's View and Those of Modern Theologians (pre-Vatican II)

St. Augustine took a harsher view of the effects of Original Sin than did the modern theologians. (I define a "modern theologian" as an approved theologian from the end of the Vatican Council [1870] until the beginning of Vatican II [1962]). Under St. Augustine's teaching, unbaptized infants are damned to Hell. Most modern theologians agree, but have reservations about "damned" meaning consignment to Hell in the usual and ordinary theological use of the word. Essentially, damnation for the unbaptized infant consists exclusively in banishment from the presence of God. As a corollary, the modern theologians can imagine the soul of an infant under the sentence of damnation who would not suffer the torments of Hell (poena sensus) nor grieve the loss over the Beatific Vision, to the point of having a degree of purely natural happiness.

St. Augustine could not conceive of damnation apart from suffering. He was willing to concede that even if unbaptized infants spent eternity apart from Hell, they could not be free from the pain of the loss of the Beatific Vision (poena damni). When St. Augustine lived (354-430 AD), he was fighting against the Pelagian heresy. Simply put, Pelagius denied Original Sin and taught that the human will, as created with its abilities by God, was sufficient to live a sinless life. The bishops gathered in a non-ecumenical Council of Carthage, which drew up nine canons against the Pelagians.

The Third Canon states, "If any man says that in the kingdom of heaven or elsewhere there is a certain middle place, where children who die unbaptized live in bliss--- (beate vivant), whereas without baptism they cannot enter into the kingdom of heaven, that is, into eternal life, let him be anathema."

These canons were approved by Pope Zosimus, albeit non-infallibly. This would seem to rule out the existence of Limbo. The historical context shows it to be no problem at all. True, Limbo is a place or state between Heaven and Hell, yet it is a place of damnation insofar as you are deprived of the vision of God. The "eternal life" of the Pelagians was a state of innocence that implied a denial of Original Sin. It was this denial Carthage condemned.

The Second Ecumenical Council of Lyon (1272-1274) defined the following, "However, the souls of those who die in mortal sin, or with Original Sin alone, shortly go down to Hell, to be punished with different punishments, however." The Council of Florence (1431-1449)  repeated these words almost verbatim. Doesn't that ratify what St. Augustine taught? Isn't Limbo rejected? No. The Church did not considered the matter closed and allowed theologians to hold the doctrine of Limbo. There were four interpretations of these definitions that were permitted:

1. There are those who die only in Original Sin

3. The Councils are actually defining the Limbo of St Thomas Aquinas

4. The Councils are defining the teaching of St. Augustine

Remember that the Angelic Doctor (Aquinas) ruled out the pain of sense for unbaptized infants. But is not the pain of the loss of God greater? The answer of Aquinas was ingenious. No one regrets not having something which he is totally unequipped to have. Hence, a person would regret the the loss of his house, or family, or good name, but not the fact he cannot fly naturally like a bird. Sanctifying Grace becomes "lumen gloriae" ("the light of glory") upon the soul's separation from the body and entrance into Heaven, thereby allowing the soul to enter the Beatific Vision of God for all eternity. (See theologian Ott, Fundamentals of Catholic Dogma, [1955], pg. 22).  Since they had not the knowledge of Faith, they have no idea of their possible supernatural destiny and will be happy contemplating God insofar as their nature permits. God need not allow them to know what they could have achieved (Beatific Vision) which they are unequipped to have by nature. No one dared to state (or even imply) that Aquinas (1224-1270), the greatest of all theologians and Doctors of the Church was meant to have his opinion condemned by Lyon and Florence. Hence, the Church did not condemn Limbo. The second interpretation above seems to imply the possibility of at least some unbaptized infants somehow saved, and that will be explored in the next section after one more development is explained.

An Interesting Development at the Council of Trent
On the discussion regarding Baptism, the great theologian Cardinal Cajetan, proposed that infants in the womb could be saved by the desire of their (Catholic) parents. He reasoned thus: "In [the womb] the infant is capable of receiving Baptism of Blood; if a child yet enclosed in the womb of his mother could receive death for Christ, he would be a martyr as are the Holy Innocents. It is then reasonable to admit that the faith of his parents could produce the same result..." (See Dyer, pg. 141). What a blow to Feenyites who claim Trent condemned all but Baptism by water! There was no condemnation of Cardinal Cajetan!

We know infants and those deprived of reason can receive Baptism of Blood (BOB). (See theologian Ott, Ibid, pg. 357). Cajetan held that a pregnant woman who dies by BOB would have her unborn child share in her glory. At Trent, theologian Andrew de Vega, proposed the following proposition to be condemned:
"Children who die without baptism may be saved." His suggestion was denied by the Council Fathers. Another theologian, Leoninus, suggested condemning the idea children can be baptized in the womb. His suggestion, too, was rejected at Trent. Interestingly, on August 21, 1901, the Supreme Sacred Congregation of the Holy Office under Pope Leo XIII declared baptism "in utero" performed by a needle inserted into the womb by doctors/nurses to be valid. There can be no doubt that the Holy Ghost was at work during the Council of Trent.

Some Council Fathers put forth the proposition that: "Children in the wombs of their mothers can be saved by blessing and the invocation of the Trinity" to be condemned. After thirteen days of deliberations, on February 22, 1547, the Secretary of the Council declared that the Fathers could not come to a decision. Therefore, the proposition was removed from the list of proposed condemnations because "it does not pertain to the teaching on baptism." It has been claimed Pope St. Pius V ordered this teaching removed from Cajetan's works, but the decision came from the editor of the book. There is no solid historical evidence Pope St. Pius V had any influence on the decision. So what did Trent mean by "it does not pertain to the teaching on baptism"?  Three things become clear from the deliberations:

1. When Trent defined the necessity of baptism for infants, it was speaking of a general, not absolute necessity, as BOB can substitute for the Sacrament
2. The definition was prompted by the Protestants who disputed the necessity of the sacrament to the extent of refusing to baptize their children
3. The infants who were the subject matter of Trent's decree were understood to be outside the womb, not in utero, as Cajetan suggested

The "Moment of Choice"?

Is there a possibility that at least some unbaptized infants can be saved apart from BOB and the sacrament of baptism? Notable theologians have taught such without condemnation or censure. Such are theologians Klee and Schell. French theologian Glorieux seems to come up with a most interesting theory, that complements Klee. Does the moment of death belong to this life or the next? All human activity ends at death, and all possibility of merit and demerit. This is dogma. "Night is coming, when no one can work." (St. John 9:4).

Death is the separation of the soul from the body. It is instantaneous, not something gradual over time. Hence, the moment of death is the same as the last moment of life. If that moment is considered part of your life, then it is possible that the soul, freed from the confines of the body, could be illuminated by God and given a test similar to the angels to either accept or reject God. If the former, they pass and go to Heaven, if the latter, they fail and go to Hell. Would this apply to all unbaptized infants? Just some? Why?

There is much to criticize. It seems close to Baptism of Desire (BOD), which Pope Pius XII taught cannot happen to infants. "In the present economy there is no other way of communicating this life to the child who has not yet the use of reason. But, nevertheless, the state of grace at the moment of death is absolutely necessary for salvation. Without it, it is not possible to attain supernatural happiness, the beatific vision of God. An act of love can suffice for an adult to obtain sanctifying grace and supply for the absence of Baptism; for the unborn child or for the newly born, this way is not open..." (See Address to the Congress of the Italian Catholic Association of Midwives [Oct. 29, 1951] Emphasis mine).

A disembodied soul is not a complete person, so it would seem that the final moment of life is more appropriately the first moment of death, therefore no merit is possible. It might open the door to abortion by thinking the child still has a chance to see God if I kill him/her.

Conclusion
The doctrine of Limbo has developed over centuries and is not fully settled. Without a pope, it cannot be. What does seem likely is that at least some unbaptized infants might have a path to salvation. How they are chosen and how it happens is known but to God--if it is true. This discussion does bring home the tremendous love God has for every person, and how He will go to any length to save a soul who is willing to turn to Him, repent, and be part of His One True Church. Let that be the lesson for us and do all we can to merit the grace of Final Perseverance. If we do our part, God will do His because He died for us and desires our salvation.

As to the possible salvation theories, theologian Ott said it best, "[extra-sacramental means of salvation for unbaptized infants] are indeed, possible, but their actuality can not be proven from Revelation." (Ibid, pg. 114).
Posted by Introibo Ad Altare Dei at 12:05 AM