Somewhere Under The Rainbow 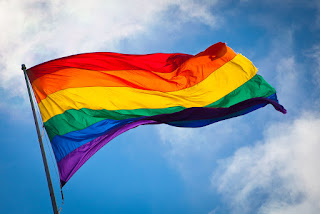 Traditionalists celebrate the month of June by dedicating it to the Most Sacred Heart of Jesus. Secular society now "celebrates" sexual perversion and mental illness by making June "Gay Pride Month." Every time I see the rainbow flag, I'm reminded of how we are living in a time of oppression, in some ways similar to those in Europe who lived for a time under the Swastika. We must accept that homosexuality is just as normal as heterosexuality. So too is "transgenderism," bisexuality, and every other aberration deemed "normal." In fact, it is so "normal" that any suggestion to the contrary must be suppressed, ridiculed, attacked, and eventually made subject to civil fines and imprisonment as a "hate crime." This is the result of the forces of evil in society.

In the days before the Great Apostasy, the Roman Catholic Church stood as a bulwark against perversion. Then the infiltration began. Bella Dodd told of thousands of Communists that were placed in seminaries to subvert the Church beginning in the first half of the twentieth century. A friend of mine asked me, "Don't you think that exposure to the True Faith in the seminary would have converted at least some of them and they would have 'blown the whistle'"? Based on several reasons (which I will not elaborate upon in this post), I believe that the infiltrators were not rank and file ideological Communists. They sent in men who were known to be sodomites. They would get to associate with men and (at that time) have easy access to boys, all the while using the prestige of the priesthood to deflect any accusations of impropriety. In rebellion against both God and nature itself, sodomites are most hateful towards God, and least likely to be moved by grace.

The plot worked. With the last obstacle removed in 1958 (the papacy, by the "election" of Roncalli), the perverts came out in full force. The Vatican II sect is run by sexual deviants, and since 2002, the scandals keep growing. As a young teenager, prior to my conversion to the True Church at age 16, I attended a Vatican II sect high school on a scholarship. One of the brothers (Society of Mary), told jokes to 14 year old boys and girls that were so vile, I can't write them in this post. I was shocked and scandalized. I repeated one of his filthy "jokes" to my father (God rest his soul), a former World War II U.S. Army Sergeant. His jaw nearly hit the ground and he was visibly uncomfortable. He knew that such jokes were sinful, and when told to teenage girls and boys, their malice was incalculable. "Are you going to complain about this Dad?" I asked him. After a long pause, he said, "Well, no, he is a brother..." Using the heightened respect accorded to clerics and religious, these fiends were able to get away with things no layman ever could.

Later in my freshman year, it was announced that the renowned priest, Fr. Bruce Ritter (ordained 1956), who had started Covenant House (an organization dedicated to helping runaway and homeless youths in New York City), would be coming to give a talk to the Freshman Class. As we were waiting for him to arrive for the talk, I needed to go to the bathroom. On my way out of the door I (literally) bumped into Fr. Ritter, who was hailed as a "model Franciscan and priest." I looked up into his eyes, and a shiver ran up and down my spine. I can't explain it, but I knew I had just looked at someone who was pure evil. He must have seen my expression, because he grimaced at me, said nothing, and went to give his talk. After going to the bathroom, and trying to calm myself down, I returned to where he was speaking.

When I told some of my friends what I experienced, they laughed it off. My parents were incredulous; just "a meaningless reaction." In 1990, Ritter was forced to resign from Covenant House and the Franciscan Order after several young men had reported that he had engaged in sexual relations with them as young boys in the care of the charity, and that he had embezzled funds. He was never charged with a crime despite all the accusations, and got himself incardinated into a Diocese in India, continuing to function as a Vatican II sect priest in upstate New York until his death in 1999--- three years before the widespread abuse scandal began to be reporte. I had a glimpse into the sodomite/pervert infestation--and I believe that for some reason, God let me know this priest was bad news.

The Vatican II sect is now doing the exact opposite of the True Church; defending sodomites and denying the indisputable connection between homosexuality and pedophilia. This is especially true in the wake of the study underwritten by the Vatican II sect "bishops" in the United States and performed by the John Jay College of Criminal Justice in New York City. The report is entitled The Nature and Scope of the Problem of Sexual Abuse of Minors by Catholic Priests and Deacons in the United States, commonly known as the John Jay Report. It was published in 2004, and is available online (See http://www.usccb.org/issues-and-action/child-and-youth-protection/upload/the-nature-and-scope-of-sexual-abuse-of-minors-by-catholic-priests-and-deacons-in-the-united-states-1950-2002.pdf).

Last October, the Jesuit-run heretical rag, America magazine, published an essay entitled No, Homosexuality is Not a Risk Factor for the Sexual Abuse of Children, authored by one Dr. Thomas Plante, a psychiatrist and residing scholar at Santa Clara University who is also an adjunct professor at the Stanford University School of Medicine. Plante and the Vatican II sect are trying even harder to normalize the sexual deviants and one of the Four Sins That Cry To Heaven For Vengeance. (See https://www.americamagazine.org/faith/2018/10/22/no-homosexuality-not-risk-factor-sexual-abuse-children).

Plante vs. The Truth About Sodomites and Pedophilia

What does the empirical evidence show? (Much of the section below is from research complied by Dr. Paul Cameron).

1. Sodomites have more overall serious problems than heterosexuals
According to a 2015 federal survey (See Medley G, Lipan RN, et al (2016) Sexual orientation and estimates of adult substance use and mental health: results from the 2015 National Survey on Drug Use and Health. SAMHSA Data Review, October), homosexuals have higher proportional rates of :

Please note the higher incidence of sex offences, yet Plante would have us believe sexual orientation is "not at all" a risk factor for sex crimes.

2. Sodomite V2 Sect "Priests" are not predators due to a lack of females
There are not only "altar boys" ("table servers" would be the more apt appellation in the Novus Bogus "mass") but just as many (and in some cases more) altar girls. Moreover, according to the John Jay Report, nearly 4% of U.S. Vatican II "priests" were documented to have molested at least one minor, and nearly 80% of the molestations by these so-called priests involved boys. Plante claims that "most of the clergy sex offenders during the last half of the 20th century… viewed themselves as more likely to be heterosexual than as homosexual."

I'm still shaking my head over the statement that these predators "viewed themselves" as more likely heterosexual than homosexual. Is this guy serious? I'm sure Stalin and Hitler didn't "view themselves" as mass murderers, but that's objectively what they were, and it is based on what they did.  A murderer is one who commits murder. Likewise, a homosexual is one who commits homosexual acts.

3. The disproportionate number of homosexual predator-"priests" is indicative that they cannot be trusted around male children, and banning them would drastically reduce the number of victims
Plante suggests between "22% to 45%" of U.S. "priests" are "gay." Let's take the low end of the range and assume 22%. Based on the John Jay Report 3.06% of the documented sex abusers engaged in homosexuality, that translates to an estimate of nearly 14% of homosexual priests being caught for sexual abuse of a minor. Given that less than one percent of priests were caught molesting girls (0.87%), barely 1% of the heterosexual priests (comprising 78% of the total) would have been caught. Unless heterosexual priest offenders are much better than homosexual priests at not getting caught, something that seems quite unlikely since it is known that boys are less apt than girls to report being molested (See Hall RC & Hall RCW (2007) A profile of pedophilia: definition, characteristics of offenders, recidivism, treatment outcomes, and forensic issues. Mayo Clinic Proceedings, 82(4), 457–71), homosexuality is a very significant risk factor for child sexual abuse.


The Wisdom of the True Church
St. Bernadine of Sienna:
"No sin has greater power over the soul than the one of cursed sodomy, which was always detested by all those who lived according to God's law. ... "

St. Jerome
"And Sodom and Gomorrah might have appeased it [God’s wrath], had they been willing to repent, and through the aid of fasting gain for themselves tears of repentance." (See http://www.newadvent.org/fathers/30092.htm).

St. Augustine
"Those offences which be contrary to nature are everywhere and at all times to be held in detestation and punished; such were those of the Sodomites, which should all nations commit, they should all be held guilty of the same crime by the divine law, which hath not so made men that they should in that way abuse one another. For even that fellowship which should be between God and us is violated, when that same nature of which He is author is polluted by the perversity of lust." (See http://www.newadvent.org/fathers/110103.htm).


Conclusion
There is an incontrovertible connection between sodomites and pedophilia. The secular pseudo-science of researchers with an agenda, using small samplings to reach predetermined outcomes, fuels societal acceptance of homosexuality. They ignore both the body of reputable research, and the disproportionate numbers of homosexual child molesters, which show the danger sodomites pose to society in general and children in particular. The Vatican II sect, having been infiltrated and driven by sodomites, leads innumerable souls to Hell. They join the world in trying to normalize perversion. If you should dare oppose the sodomite agenda, be prepared for persecution.

The Rainbow Flag is slowly but surely becoming the modern day Sickle and Hammer of oppression. Maybe we need a counter-manifesto against them: "Decent people of the World Unite--You Have EVERYTHING to lose if the sodomites are not stopped now."
Posted by Introibo Ad Altare Dei at 12:05 AM