Show Me the Heresy 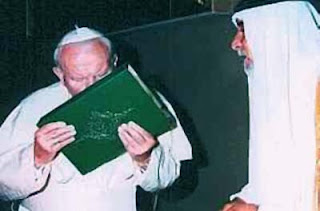 Some Vatican II apologists claim that the post-conciliar "popes", Paul VI, John Paul I, John Paul II, and Benedict XVI, never really professed heresy, and therefore could not lose authority. The statements were "ambiguous" or "able to be squeezed within the limits of orthodox teaching." Such is simply NOT the case. Let's look at (a) heresy defined and(b) heresy displayed by the alleged "pontiffs."

A heretic, according to Canon 1325.2 is “one who, after the reception of baptism pertinaciously denies or doubts any of the truths to believed by divine and Catholic faith.” The teaching must be an article “of divine and Catholic faith” that the Church has authentically proposed as such.
A prior ex cathedra or conciliar definition is not required. “The explicit teaching of the universal ordinary Magisterium suffices for a truth to be authentically proposed for adherence by the faithful.” (See Michel, DTC 6:2215)

The heretic may deny the doctrine “in explicit or equivalent terms,” (See R. Schultes, De Ecclesia Catholica: Praelectiones Apologeticae (Paris: Lethielleux 1931), 638. “verbis explicitis vel aequivalentibus.”) through either a contradictory or a contrary proposition.

The list could go on and on, but one thing is for certain: it's much easier to point to the few instances of NON-HERETICAL statements and actions of the post-conciliar "popes" than the plethora of heresy the Unholy Fathers of Modernist Rome regularly pour forth leading to the damnation of souls.

Posted by Introibo Ad Altare Dei at 8:50 AM