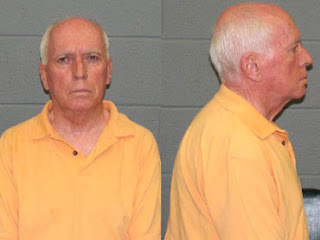 "Fr." Kevin Gray of the Vatican II Archdiocese of Hartford, Conn. has been arrested. This is nothing new in Vatican II-land. The real shocker seems to be that they have ANY priests not under indictment! I'm bringing out this case NOT to "prove" the sect is false. Even in the True Church there have been scoundrels, starting with Judas Iscariot chosen by Our Lord Himself! Rather, the scandals show how they are the logical outgrowth of Vatican II's ecumenical worldview which necessarily encompasses relativistic morality.

According to CBS News, 64 yr old Fr. Gray had been embezzling money since January 2003, to the tune of approximately 1.3 MILLION dollars!! What did he do with the money? He spent it on a lavish sodomite lifestyle: high class restaurants, top rated hotels, and high priced male prostitutes. He then paid his catamites rent and put one through Harvard (an act of 'Charity'?). When asked by police why he did it he claimed that he thought the "Church owed it to me, because I was unhappy with my assignments." What has happened to him? He has been suspended while awaiting trial, but not excommunicated. Apb. Lori, of Hartford, apparently "overlooked" Gray's failure to submit annual finance reports because he is a "popular" priest! To top it all off, Fr. Gray told his parishioners that he had terminal cancer in an attempt to elicit sympathy when his scandal broke.

What does all this tell us about Vatican II? Lots:

1. Since 1972, candidates with "same sex attraction" were no longer officially barred from entering Vatican II seminaries; unofficially the practice began in the late 1960s, right when Gray was admitted. The focus shifted from the theological to secular psychology not in alignment with Traditional Church teaching. Homosexuality was not a moral disorder to be overcome, you were "born that way." It didn't disqualify you for service in the Church because keeping such a person surrounded by men was not seen as an "occasion of sin" to be avoided. Sin is negative theology!

2. The priesthood is seen as a "job" or "career" not a vocation--a sacred calling by God. How many times in the corporate world do you hear of embezzlers feeling like they got the short end of the stick? Priests talk of retirement packages and benefits as if this were a secular job. With the sense of the sacred trashed by Vatican II's promotion of man-centered, Modernist theological heresy, the priesthood is not seen as a sacred calling from God and the need to make sacrifices (working until death or physically/mentally unable) is disappeared. So now if you don't like your assignments, don't do them well and offer up the hardship to Christ. No, the Church "owes" you the "right" to steal money and break your vows to commit the unnatural vice with young sodomites for sale. Likewise, Holy Matrimony is no longer viewed as a vocation, so if you're not being "fulfilled" as you think you should, get a divorce--and the Vatican II equivalent of a quick "annulment" will follow. This man, Kevin Gray, is an apostate who has no fear of God (if, indeed, Gray ever believed in Him in the first place). Stealing from Church and faking terminal illness? Heathens of old had better standards of morality.

3. There are no consequences for your actions. "Bishops" will cover up for their "popular" perverts. If a priest were popular for saying unpopular (true) things (e.g.condemning pre-marital sex, denying communion for abortion politicians), he would have been strictly scrutinized. When the late, great Fr. Paul Wickens left the Archdiocese of Newark, New Jersey, to abjure the heresies of Vatican II and offer the True Mass and Sacraments in a chapel, he was "excommunicated." To be Catholic is the only crime! Gray is still "in good standing" while suspended from all priestly functions!!

4.This is the sad legacy of Vatican II. Some of Gray's parishioners actually attempted a "defense" of his actions. But what can one expect when the lines of right and wrong, black and white are all blurred? The color represented by our indicted sodomite-embezzler's name says it all.
Posted by Introibo Ad Altare Dei at 9:09 AM