Marrying The Culture of Perversity 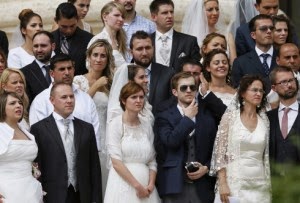 It has been widely reported that Antipope Francis will marry "cohabiting couples" (read: "people shacking up and living in sin"). Yes, people living in sin and giving public scandal should get married, but only after they separate and live chastely until the wedding. This recognizes the sacredness of the marital act. Frankie wants to be "welcoming," i.e. "come on in and we don't mind sin." The Vatican II sect apologists are attempting to spin it as an act of "mercy" and recognition that "no one is perfect." True mercy is fraternal correction, and while fully admitting that none but Christ and His Mother are perfect, we must nevertheless heed Our Lord's admonition to "Be thou therefore perfect, as also thy heavenly Father is perfect."                   (See St. Matthew 5:48)

What I have not seen mentioned, is how the Antipope's actions once more try to conform Christ to the world and not vice-versa. He is implicitly giving his blessing to the heathen culture which degrades the marital act, and dignifies the cheapening of sex. Look no farther than pop culture to see how desensitized we've become to sexual sin. The world has instilled in people the "pleasure" of indulging in the forbidden without remorse, while appealing to Man's sinful nature. These ultimately lead to a perverse and deranged bondage that is contaminating society at large.

Hollywood is completely obsessed with sex. Even what used to be labeled as family entertainment is not safe. The animated film, The Road to El Dorado, featured the voice of actress Rosie Perez. When she finally saw her character, with a body far beyond that of a Playboy playmate, she was dumbfounded and recalled:

"I was surprised when I saw her. I even told [Dream Works partner] Jeffrey [Katzenberg], "Are you sure this is family programming?"

When filmmakers Rachel and Barak Goodman visited an Atlanta suburb to look into a surprising outbreak of syphilis among 13-17 year olds, they found that one of their main activities involved watching the Playboy Channel, then copying whatever they saw on the screen. Titling their documentary, The Last Children of Rockdale County, the film details the influence television had on the entire town of Rockdale and the carnage of diseases that ruled the day. How bad does shacking up seem in comparison to this vile situation?

Actress Sharon Stone says she's "studied a myriad of religious philosophies, even Scientology. Ultimately I've come to the conclusion that I'm a Taoist Buddhist who believes in God." She takes her Eastern ideologies seriously. When she wanted to get pregnant, she performed an African fertility dance and sprinkled clover flowers and raspberry leaves on her bed. This was to no avail, yet when she finally adopted a boy, she named him Roan Joseph Bronstein - his first name is Celtic for seal, a magical animal in that mythology. She has been quoted as saying, "I don't believe in sex as sin, or sin in general," and it's not surprising since she has portrayed a lesbian murderer in the film Basic Instinct.

Actress Michelle Pheiffer is on record as stating: "Fidelity is…not that important. Traditional marriage is very outdated. I don't think people should live together the rest of their lives suppressing frustrations." Yes, and that twisted idea goes along perfectly with studies that show "cohabiting couples" having a much higher divorce rate than those who do not live together prior to marriage since they have no shame and seek not to suppress sin ("frustrations"), even for a short time as penance before marriage.

The Modernist Antipope Francis strikes again with more damage to Faith and Morals. Maybe they can film the event and call it Sex and The Eternal City.
Posted by Introibo Ad Altare Dei at 6:29 PM