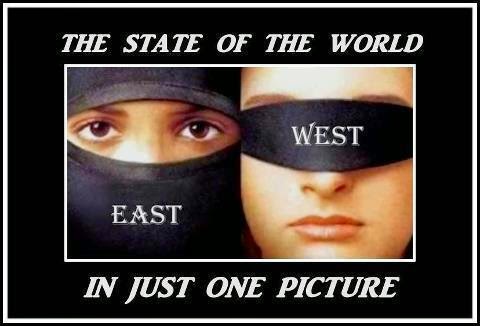 Right in the middle of America's heartland, Oklahoma, we witnessed a recent convert to Islam behead a 54 year-old woman with whom he used to work. According to one news agency:

''Alton Nolen, ...aka Jah'Keem Yisrael, after attempting to convert a fellow female worker at Vaughn Foods, and after being fired--beheaded that female co-worker followed by attempting to murder and behead another woman co-worker. The CEO of Vaughn Foods shot Yisrael before he encored his grisly beheading act.

One look at Yisrael's Facebook page features a "Who's Who" adulation of international terrorists from al Qaeda to ICIS. He highlighted one headless victim on his Facebook page with praise to Allah. According to Islam anyone who disagrees with that religion deserves to lose his or her head and hands''

The True Church of Christ has always fought against ''...the darkness of idolatry and of Islamism...'' as the Consecration prayer to the Sacred Heart of Jesus taught until the defection of the hierarchy. Not only did Antipope John XXIII (now ''St.'') remove that phrase from the prayer, the heretical document Nostra Aetate had this to say:

"3. The Church regards with esteem also the Moslems. They adore the one God, living and subsisting in Himself; merciful and all- powerful, the Creator of heaven and earth, who has spoken to men; they take pains to submit wholeheartedly to even His inscrutable decrees, just as Abraham, with whom the faith of Islam takes pleasure in linking itself, submitted to God. Though they do not acknowledge Jesus as God, they revere Him as a prophet. They also honor Mary, His virgin Mother; at times they even call on her with devotion. In addition, they await the day of judgment when God will render their desserts to all those who have been raised up from the dead. Finally, they value the moral life and worship God especially through prayer, almsgiving and fasting.

Since in the course of centuries not a few quarrels and hostilities have arisen between Christians and Moslems, this sacred synod urges all to forget the past and to work sincerely for mutual understanding and to preserve as well as to promote together for the benefit of all mankind social justice and moral welfare, as well as peace and freedom"

There is no peace and freedom apart from the King of Peace, Jesus Christ, and His One True Church. The Modernist Vatican II sect rejects this premise. Antipope Francis takes it even further in his "encyclical" Evangelii Gaudium :

"253. In order to sustain dialogue with Islam, suitable training is essential for all involved, not only so that they can be solidly and joyfully grounded in their own identity, but so that they can also acknowledge the values of others, appreciate the concerns underlying their demands and shed light on shared beliefs. We Christians should embrace with affection and respect Muslim immigrants to our countries in the same way that we hope and ask to be received and respected in countries of Islamic tradition. I ask and I humbly entreat those countries to grant Christians freedom to worship and to practice their faith, in light of the freedom which followers of Islam enjoy in Western countries! Faced with disconcerting episodes of violent fundamentalism, our respect for true followers of Islam should lead us to avoid hateful generalisations, for authentic Islam and the proper reading of the Koran are opposed to every form of violence (Emphasis mine)."

Frankie would need to explain away the expert testimony of  Imran Ahsan Khan Nyazee, Assistant Professor on the Faculty of Shari’ah and Law of the International Islamic University in Islamabad. In his 1994 book The Methodology of Ijtihad, he quotes the twelfth century Maliki jurist Ibn Rushd: “Muslim jurists agreed that the purpose of fighting with the People of the Book…is one of two things: it is either their conversion to Islam or the payment of jizyah.” Nyazee concludes: “This leaves no doubt that the primary goal of the Muslim community, in the eyes of its jurists, is to spread the word of Allah through jihad, and the option of poll-tax [jizya] is to be exercised only after subjugation” of non-Muslims.

Furthermore, I'd like to see his exegesis on texts, such as the following, from the Koran:

The Vatican II sect refuses to see the fact that Islam is a false religion, a violent and Satanic creed, that brings terrorism to the world on behalf of their false god "Allah." They have softened the stance of formerly Catholic nations (and the world at large) against it in the name of heretical ecumenism. Islam breeds evil, and we have a decapitated woman right here in Oklahoma as the latest in an unending series of proof.

As I once remarked; perhaps when the Grand Imam of the Islamic Republic of Italy starts issuing fatwas from the erstwhile Vatican City, the world will see the evil of Islam (and the ecumenism that made its victory possible) when it will then be too late. King St. Louis IX, Victor over the Saracens, how the world needs your prayers and protection as never before.
Posted by Introibo Ad Altare Dei at 8:15 PM