Love The Sin, Hate The Sinner 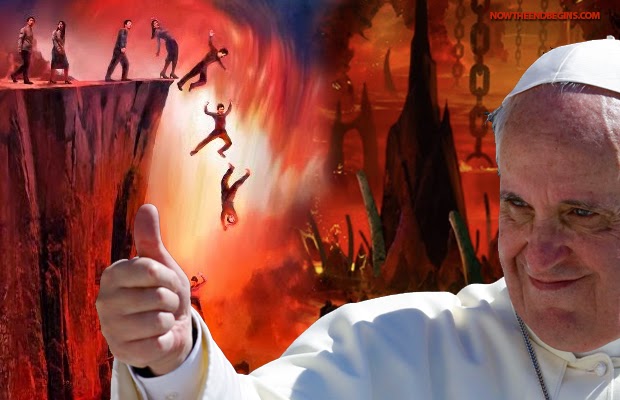 In the Vatican II sect, everything is backwards. The Most Holy Sacrifice of the Mass, which is God-centered, gets replaced by the Novus Bogus "mass" which is man-centered. Likewise, the primary purpose of the sacraments (which, save Baptism and Holy Matrimony they rendered invalid) are made subordinate to the secondary purpose. Hence, to give but one example, Extreme Unction is now called "Anointing of the Sick." The primary purpose of remitting sin and strengthening the soul against what could be its final battle with Satan before it appears before the Judgment Seat of God, is replaced with restoration of bodily health (secondary effect, if God knows it to be for the good of the soul).

Now, the old spiritual truth that we should "love the sinner, but hate the sin," gets inverted by Antipope Francis. According to an article in the National Catholic (sic) Reporter, the Modernist Vatican will neither confirm nor deny that Francis met with a transgendered Spaniard ( in this case a woman who was surgically mutilated into a "man"). There are numerous news reports that Frankie hugged the 48 year old Diego Media Lejarraga at a private meeting on January 24th in Vatican City.

Sodomite/pervert "rights" supporters are jumping for joy. They are using this occasion to show how "inclusive" and "welcoming" Francis is of everyone. Lejarraga said a local priest called him the "devil's daughter," but despite this he wrote to Frankie in the hopes of being accepted and receiving a "papal blessing." According to the Spanish newspaper Hoy, Frankie told the unrepentant pervert, "You are a son of God and the Church loves you and accepts you as you are." (Emphasis mine)

Yes, God loves sinners but hates sin. By telling this disturbed person he need not repent, Frankie is condoning his sin, his perversion, and his march towards Hell. The pervert even attended with his fiancée (wouldn't it be a kick in the pants if it was a "woman" that used to be a man!). Francis really hates this man. The priest who allegedly called Lejarraga the "devil's daughter" actually had more charity. I wouldn't advise saying that, but would definitely let the person know God loves him but not what he has done. He must seek psychological help from a Christian therapist, and spiritual guidance to both repent and stay chaste. This is true charity which the world hates and will not tolerate.

New Ways Ministry, lead by Sr. Jeannine Gramick, is dedicated to normalizing perversion of all stripes. She wrote to Frankie that she will be leading an "LGBT pilgrimage" to Rome next month. She wants unrepentant sodomites and other unrepentant sinners to receive Vatican II "communion." (Deo gratias, it's invalid!). She shot back Frankie's own words that the Body and Blood of Christ is spiritual nourishment that we need to grow in our love-relationship with God, not "a prize to be awarded those who are worthy." Yes, no one is worthy to receive Christ, but you must first be a friend of God by being in the state of grace.

This year the US Supreme Court is poised to declare sodomite "marriage" a constitutional "right" in the name of "equality" and "privacy." We kill unborn children under the same banner of "right to privacy" and "reproductive freedom" which will give women "equality." As Pope Leo XIII wrote in Temetsi, "The world has heard enough of the so -called "rights of man." Let it hear something of the rights of God." But the world will hear none of it. Instead, we think "tolerance" and "acceptance" of those in unrepentant sin is a "virtue." The world will even declare such evils as "rights."People who judge things as sin and demand penance are denounced as "mean-spirited," "exclusive," and even "evil."


We are now reaping the fruit of such misguided modern morals. New evidence (3,500+ consecutive news reports from China to the US to Russia over the past three years) shows that the portion of a society's child molestation attributable to homosexual abuse is strongly and directly related to its degree of acceptance of homosexuality (See Family Research Institute Jan/2015 bulletin by Dr. Paul Cameron, PhD.). Actions speak louder than words, and Antipope Francis is showing that, despite what still passes for official Vatican policy in some aspects, he wants acceptance of any unrepentant sinner and, by extension, to the sin itself. Unfortunately, those he deludes will find Hell quite intolerable and unacceptable.
I'm reminded of 2 Timothy 3:13, "But evil men and seducers shall grow worse and worse: erring, and driving into error."

Posted by Introibo Ad Altare Dei at 7:50 AM