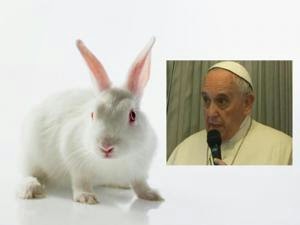 Years ago, when a woman tested positive for pregnancy, there was rejoicing by the parents. True, a rabbit died as part of the testing, but the need to know if there was a pregnancy justified its medical use. Antipope Francis, is now saying, "God gives you methods to be responsible. Some think that – excuse the word – that in order to be good Catholics we have to be like rabbits. No."

Humans have the sacred and awesome role in assisting in God's creation. When a man and woman, joined in Holy Matrimony, use natural means to procreate, they form the body of the new human person, and God infuses the immortal soul. Ratzinger opened the door to contraception being formally legitimized in the Vatican II sect when he said female prostitutes could licitly use contraception to prevent the spread of AIDS. This is the complete overthrow of Catholic moral theology.

The Ordinary Universal Magisterium has always taught that acts contrary to nature are intrinsically evil and cannot be justified. To say otherwise is to accept the principle that the end justifies the means. An article published in the Vatican II rag, The Wanderer (which always seeks to explain away the Modernist heresy of the Vatican II antipopes), said that contraception is only wrong within marriage because outside of marriage all sexual acts are forbidden anyway, hence extramarital contraception must be judged as moral or immoral on extrinsic grounds (!)

If there is nothing wrong with perverting the sex act outside of marriage then bestiality, as well as sodomy, could be justified on some extrinsic grounds. Now, Frankie is getting ready to take it to the next step-- feel free to limit children at will and with out sufficient cause. Don't trust in God. People see our sect as promoting "breeding like rabbits." Frankie even castigated a woman who had seven children by C-section and was pregnant with another child as "irresponsible."

All this could lead to a de facto overturning of the true teaching against contraception. The fact (always brought up in the media) that "89% of married Catholics (sic) approve of contraception" no more renders it licit or moral than if 89% of Catholics approved of adultery. When the next October synod on the family takes place in October, watch for what is probably coming next: limiting children at will for selfish reasons is "legitimate."

This is an injury to God. Marriage was instituted to propagate the human race. It is an injury to society. It depopulates an already shrinking Christian society which will be overrun by the Mohammedans having large families. It is an injury to the family. It renders the husband and wife selfish and they will either spoil or neglect the one or two children to which they limited themselves  for selfish motives; not out of absolute necessity. It is an injury to the individual as they subordinate the highest good of marriage to their selfish desire to be free from children they deem "unnecessary" because it would detract from a lavish lifestyle.

Whether or not Christianity survives or is enslaved by the darkness of Islamism depends on the proper view of the ends of marriage and self-sacrifice. This is a matter of the highest importance--not an exercise in splitting hares.
Posted by Introibo Ad Altare Dei at 5:20 AM