Leading Others To Hell By Example 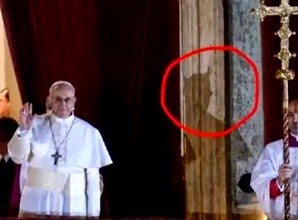 I had another topic ready for this week's post, which I needed to put off so I can give my impression of the Unholy Father's visit to the U.S. Rather than spell out all of what was wrong, I will just let Jorge Bergoglio ("Pope" Francis) do the talking, or rather, show us by his example, that for which he stands.


Who Francis Admires And Holds Up For Emulation
"By their fruits thou shalt know them. Are grapes gathered from thorn-bushes, or figs from thistles?" (St. Matthew 7:16). Our Lord told us that only a bad tree produces bad fruit. Now, we see a man who claims to be "pope," yet he preaches an earthly "gospel," fails to uphold traditional teachings on the murder of the unborn and unnatural vice, never demands that people repent, and cites evil people for admiration. Even the magazine Newsweek asked, "Is The Pope Catholic?" The evidence of his own actions tell us the answer is a resounding "NO." He is neither Catholic nor pope.

Posted by Introibo Ad Altare Dei at 4:05 AM