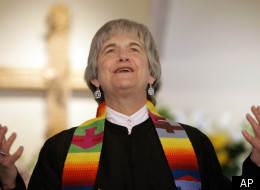 The Vatican II sect continues its quest to stamp out every last vestige of Catholicism from its ranks. At their "Synod on the Family," Canadian "Archbishop" Paul-Andre Durocher of Gatineau, Quebec, said the Synod should consider the possibility of allowing for female "deacons" as it seeks "ways to open up more opportunities for women in church (sic) life."  (See http://ncronline.org/news/vatican/archbishop-synod-should-reflect-possibly-allowing-female-deacons).

Let's be clear: the goal of the Modernists is strict egalitarianism. All religions are more or less good and lead to Heaven. Women and men are not called to different vocations. Females and males are the same, not only insofar as they are created in the image and likeness of God, but they must be called to do everything equally in the "Church." In 1968, the new rites of ordination to deacon and priest (as well as consecration to the episcopacy) were rendered null and void--just like Anglican Orders which were declared invalid by Pope Leo XIII in 1896. Hence Mr. Durocher is a layman, having been "ordained" a priest in 1982, and "consecrated" a bishop in 1997. (His boss, Jorge Bergoglio, is also an apostate layman, so as the teenagers are wont to say, "It's all good.")

If the Sacrament of Holy Orders is already invalid, why a push for women as deacons? Because just as "same sex marriage" puts male and female in roles God never intended (indeed, has forbidden), parity of females with men in churches is a spiritual perversion of God's supernatural order of things. The Modernists always soften things up incrementally. First, "altar girls" now known by the gender-inclusive term "altar servers." (Ironically, they should be called waiters and waitresses since there are no altars, just tables to eat bread and drink wine). Then, to show a facade of  being "traditional," in a 1994 letter, Ordinatio Sacredotalis,  then-"Pope" John Paul II wrote: "Wherefore, in order that all doubt may be removed regarding a matter of great importance, a matter which pertains to the Church's divine constitution itself, in virtue of my ministry of confirming the brethren (cf. Lk 22:32) I declare that the Church has no authority whatsoever to confer priestly ordination on women and that this judgment is to be definitively held by all the Church's faithful." Even Frankie has written in Evangellii Gaudium: "The reservation of the priesthood to males, as a sign of Christ the spouse who gives himself in the Eucharist, is not a question open to discussion."

In order to change, they must admit deaconesses first. There are already women who read at the Novus Bogus "mass," distribute "communion" and "nuns" (mostly glorified lesbian social workers) who offer "communion services" at "priestless parishes." Once deaconesses are in, they can begin to "reexamine" the older declarations and find some pretense as to why they no longer apply to bar priestesses and female bishops. Remember you read it here when it comes to pass. Mr. Durocher is doing the dirty work of groups like Roman Catholic (sic) Women Priests. According to their website: "Mission: 'A new model of ordained ministry in a renewed Roman Catholic (sic) Church.'"

They further write: "Statement on Apostolic Succession
The ordinations of Roman Catholic Womenpriests are valid because of our apostolic succession within the Roman Catholic Church. The principal consecrating Roman Catholic male bishops who ordained our first women bishops are bishops with apostolic succession within the Roman Catholic Church. Therefore, our bishops validly ordain deacons, priests and bishops. Consequently, all qualified candidates, including baptized ministers and priests from other Christian traditions, who are presented to our bishops for ordination are ordained by the laying on of hands in apostolic succession in the Roman Catholic Church. The ordination rite has all the same essential parts as the rite used for male candidates and deacons." (Emphasis mine) The apostate women in this sect and within the Vatican II sect are "welcoming" to any false creeds, as well as sodomites. Many are bisexual or lesbian. They dare to seek a role Christ did not give to the His Immaculate Mother. If any human being was worthy of the sacrerdotal dignity, it was the Blessed Virgin Mary. It has nothing to do with "discrimination" and everything to do with God's plan for men and woman being different in the Church.

What does the True Roman Catholic Church teach about the ordination of females? According to theologian Tanquerey: "First, by divine law only men who are wayfarers, of the masculine sex, can validly receive the sacrament of orders. Women are absolutely incapable of receiving any order whatsoever.

Proof from Scripture. Priests and deacons must preach but according to St. Paul: "Let women keep silence in the churches; for it is not permitted them to speak but to be subject" [I Cor. 14:34-35]. "Let the woman learn in silence with all subjection. But I suffer not a woman to teach. [I Tim., 2 et seq.]

Proof from Tradition. St. Irenaus, St. Epiphanius, St. Augustine and others regarded as heretics the Pepuzians, the Marcosians and the Collyridians who proclaimed women capable of the priesthood and of sacrifice, and listed their teaching among the heresies. The Code teaches similarly: Canon 968 sec. 1." (See A Manuel of Dogmatic Theology, Desclee Company, 1959, 2:361--Italics in original).

For those who claim deaconesses were ordained in the early Church, theologian Pohle notes that the "ordination" was considered a mere blessing and whose main duties were to guard the doors and maintain order among those of their own sex in Church, to instruct them privately in the Faith, and other strictly non-sacerdotal functions. (See The Sacraments B.Herder Book Co., 1924, 4:126-127).

Having filled their ranks with sodomites, the lesbian former "nuns" will soon join the Vatican II clergy as deaconesses as the first step to the One-World Ecumenical and Egalitarian Sect which will emerge as the ultimate bitter fruit of the Second Vatican Council. In the not-to-distant future, you might stumble into one of their temples to hear "Mother Gloria Steinem" give a sermon on the goodness of abortion, and "bless" the congregants "In the name of the Mother/Father and of the Christ Child and of the Holy Spirit." Spiritual castration complete.

Posted by Introibo Ad Altare Dei at 3:41 AM