A Sensation Of Reincarnation? 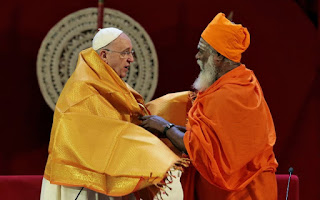 St. Paul tells us in Hebrews 9:27, "And as it is appointed unto men once to die, and after this the judgment:"
Since the advent of the Vatican II sect, the world is becoming increasingly pagan. I can't even count the number of times I've heard people who profess to be "Catholic" say "It's karma" when someone who had done evil, gets what he deserves (or someone does something good and a good action comes their way). I wince, and interject, "No, it's Divine Providence. Karma is a pagan Hindu concept." Also, I will frequently hear, "Maybe I'll be a (such and such) in my next life." This is a clear reference to the pagan doctrine of reincarnation, whereby people's souls go through cycles of birth, death, and re-birth until they achieve Nirvana (which means to be "blown out" like a candle) so as to escape the cycle and achieve "oneness" with the universe (a type of pantheism).

Reincarnation is in vogue like never before. The list of people who believe in reincarnation is getting longer and gaining more prominent names. In the past, General George S. Patton, Mark Twain, Ralph Waldo Emerson, Walt Whitman, Henry Ford, and Albert Schweitzer all believed in a cycle of rebirth. More recently, the late Robin Williams was a believer in reincarnation as well (See my post of 8/17/14 for more on that topic). "Conservative" Vatican II sect member and actor Martin Sheen believes in past lives and has stated, "Our children come to us to make up for indiscretions in past lives. They are hold-overs from lifetimes we have not solved." Other contemporary "reincarnationists" include Steven Seagal, Sylvester Stallone, Jerry Springer, and Phil Collins, to name only a few.

1. "Many Catholics think that a single life of anywhere from a few seconds' duration to 110 years is not enough time to determine the destiny of a soul for all eternity. They feel that God would be unloving if He (excuse the conventional pronoun) were to condemn a sinner to hell, but irrational if He rewarded a baby born dead with heaven. Some of these Catholics see the wheel of rebirth as a more plausible form of purgatory. "

2. "The other main reason that Catholics -- and other Americans -- adopt a reincarnational worldview turns on evidence. Much, perhaps most, of what passes as evidence comes from the popular media. Stories about people who have seeming memories of a previous life or mysterious phobias or obsessions or talents that cannot be explained by events in this life abound, and they often set people to wondering. The History channel serves up occasional stories of apparent rebirth, and these are based on research by paranormal investigators.

There is also some reputable academic research being done on reincarnation that trickles down into public awareness. This is the work of Ian Stevenson, the famous reincarnation researcher affiliated with the University of Virginia who died in 2007. Stevenson and his associates traveled over the world tracking down little children, usually aged between 3 and 5, who claim to have memories of past lives. In hundreds of cases from all over the world their memories would match actual events that happened to the adult they remembered being." (See http://www.hinduismtoday.com/blogs-news/hindu-press-international/-why-do-so-many-catholics-believe-in-reincarnation-/10313.html)

With solid theological formation destroyed in the Vatican II sect, it's no wonder people will get taken in by these reasons. This post will give a brief explanation of reincarnation and show why these reasons don't support belief in past lives.

Reincarnation is the belief among both Hindus and Buddhists that you will be "incarnated" (given a body) again ("re-") in order to progress and work out your karma (good and bad deeds) and ultimately escape the cycle of rebirths by attaining Nirvana (a state of perfection which usually, but not always, involves the extinction of the self into "Oneness"). There are seven themes that are common in all variations of reincarnation:

1. A goal of ultimate perfection for humanity.

2. An evolution towards perfection that is achieved through reincarnation.

4. Your self survives death in successive afterlives.

5. You get multiple chances to make amends for the wrongs you've committed.

6. You will always be reincarnated in a body susceptible to die until you reach Nirvana.

7. There are multiple planets, universes, and dimensions upon which you can be reincarnated; it is not limited to Earth.

It's obvious that reincarnation is incompatible with Church teaching. However, I wish to respond to the reasons most commonly given above for belief in this false doctrine. It is based on feelings and sensation more than anything else, which is why an appeal to the teaching of the Church or quoting the Bible will usually hold no sway over such believers. Deja vu (from the French for "already seen") is the sensation that something you are experiencing (usually for the first time) has been experienced by you in the past. This is then attributed to having done the particular experience "in a past life."   There are sound arguments to reject the reincarnationists' reasons in addition to Church teaching; these I offer below.

1. One lifetime is enough to decide your eternal fate. What difference does it make if a person lives 7,000 years in various incarnations or 70 years in one lifetime when compared to eternity? Are not both infinitesimal when compared to eternity? Everyone is given ample opportunity to get to Heaven, and no one goes there unless they choose it! Not all experiences admit of second chances. Reincarnationists are fond of comparing life to a test that a kind teacher lets you retake if you fail. I could just as easily analogize to someone committing suicide by shooting himself in the head. There is no "do over," and the result is permanent. Provided that the person was of sound mind, the choice was freely made. Purgatory is for getting rid of imperfections; the person has already decided to choose God within their lifetime, so reincarnation is nothing like the dogma of Purgatory.

2. Reincarnation does nothing to explain evil and is unjust unlike Hell. Children can be baptized because they did nothing wrong in contracting Original Sin. It is simply the deprivation of sanctifying grace caused by the Fall of the first man. In a similar way, if a wealthy couple squanders millions of dollars, their children will be born into a poor state through no fault of their own but those children can work their way to wealth. Children who die without baptism are generally thought to enjoy some natural happiness (Limbo) because of no personal fault. Contrast this with reincarnation. In what sense does your self continue? If you have no memory of what you did in a past life (and you may not even exist as the same gender or on the same planet/dimension), in what sense do you survive death? If there is no bodily continuity, memory, or intellectual awareness, it seems like you're suffering for what someone else did, which is unjust.

Reincarnation also offers no solution to the problem of evil. For example, if someone is born with no arms because they assaulted people in a prior life, and they assaulted people in a prior life because before that life they couldn't control their temper, whence did evil originate? It's an infinite regress of past lives with no explanation. How did suffering begin in the first place if each life of suffering was caused by past bad karma? Moreover, there would be no free will in the view of reincarnation. Eventually, everyone will come to some "Nirvana." So it doesn't matter if you're Hitler or St. Francis of Assisi, you both get to the same place regardless of what you do. On the other hand, Heaven and Hell are freely chosen with the wicked punished and the good rewarded.

3. Deja vu, hypnotic recall of past lives, and "spontaneous recall" are easily explained without reincarnation.

According to a 2012 study in the peer reviewed journal Consciousness and Cognition 21 (2) 969-975, it was suggested recognition based on familiarity can cause a sensation of deja vu. Using virtual reality technology, it was found that similarity between a scene's spacial layout and the layout of a scene previously experienced (but not recalled) can lead to a subjective feeling of "having been there before despite knowing otherwise." This is also known as "cryptoamnesia." In simple terms it means that the subconscious relates a present event with a previous one that the conscious mind does not remember. One event is similar to another and the mind fuses them together, giving the sensation that this "happened before."

So-called "past lives" brought out under hypnosis are fraught with difficulties. According to hypnosis expert James E. Parejko in an article published in the Journal of the American Institute of Hypnosis (Jan. 1975), he listed four factors of subconscious intervention during hypnosis: (a) Expectations of the hypnotist, (b)  diminished critical thoughts in the mind that accompany deep trance states, (c) a triggering idea by the hypnotist, and (d) the ability of the mind to hallucinate.

A case in point of inherent unreliability was that of Bridey Murphy. Through hypnosis, a woman allegedly regressed to 18th century Ireland. She suddenly spoke Gaelic, described the coastline where she lived, discussed the customs and spoke like a life-long Irish native. Upon further investigation, "Bridey Murphy" (the name of the person she allegedly was in this "past life") never existed but was a figment of the woman's imagination. She was raised by her grandmother who spoke Gaelic and kept history books on Ireland which she related to her granddaughter. The hypnotic subject had forgotten the language and history as she got older, but it was brought back under hypnosis with the mind giving life to the memories by manufacturing a name. (Let's not forget that some of these subjects, who dabble in the occult, could be under demonic control).

In the famous cases of Dr. Ian Stevenson, who investigated children claiming to have "spontaneously recalled" a past life, the doctor himself admits of bias in his study due to cultural conditioning. He wrote, "...the principal sites of abundant reported cases are: northern India; Sri Lanka; Burma; Thailand; Vietnam; western Asia, especially south central Turkey, Lebanon, and Syria; and northwest North America, among the natives of that region. The peoples of these areas (of the groups among whom the cases occur) believe in reincarnation." (See Stevenson, Ian, "The Explanatory Value of the Idea of Reincarnation," Journal of Nervous and Mental Disease Sept. 1977, 308).  He further admits, "Neither any single case nor all the investigated cases together offer anything like a proof of reincarnation." (Ibid, 325). So much for  the most reputable research they have to date.

Conclusion
Reincarnation is dangerous on many levels. It makes people complacent that they can do wrong and get "multiple chances" to do it over until they get things right. People "deserve" their fate from a previous life, so why go out of your way to help? The Church makes clear that this life is the only one we will ever have, so get things right the first and only time you're here. Don't talk about "karma" and "your next life," as these are false, pagan ideas. As G.K. Chesterton wrote, "Hell is God's great compliment to the reality of human freedom and the dignity of human choice."
Posted by Introibo Ad Altare Dei at 4:10 AM