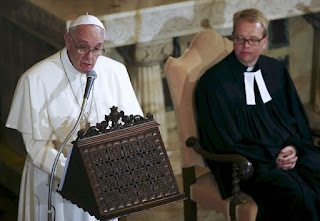 The year 2017 will mark the 500th anniversary of the so-called Protestant "Reformation." It began with the nailing of the heretical "95 Theses" on the door of All Saints Church in Wittenberg by the heretic priest Martin Luther. He was condemned by Pope Leo X in the decrees Exurge Domine (June 15, 1520) and Decet Romanum Pontificem (January 3, 1521, which excommunicated him vitandus, i.e. "to be avoided"). On June 26, 2016, "Pope" Francis said on an interview, "I think that the intentions of Martin Luther were not mistaken. He was a reformer. Perhaps some methods were not correct. But in that time…the Church was not exactly a model to imitate. There was corruption in the Church, there was worldliness, attachment to money, to power...and this he protested." (Emphasis mine). The Church is always a model to imitate, the Holy Bride of Christ. The clergy are not always to be imitated; that's a huge difference.

Those who read my posts regularly, know that I do not consider the Vatican II sect to be a false man-made religion based on the unnatural vice that plagues a large number of its clerics, but on the heretical doctrines it teaches. Francis wants us to think the Reformation was little more than an attempt to reform abuses, as in the days of St. Francis of Assisi, and not a matter of heresy. Mr. Bergoglio even plans on going to Sweden to join in the "celebration" of this infamous quincentenary. Rather than review the 95 errors of Luther, let's look at the 96th error introduced by Vatican II--the Church is somehow "wounded" and "incomplete" because of "divisions in Christianity."


The Primary Error of Vatican II is a False Ecclesiology

As I've stated many times, Vatican II introduced the novel and heretical teaching that the "Church of Christ" is not the same as the traditional Roman Catholic Church. The new ecclesiology (i.e. the teaching on the nature of the Church) states that the Church of Christ "subsists" in its "fullness"  in the Catholic Church because it has all of the "elements." Other sects are part of the Church of Christ according to how many elements they possess. To have all the elements is best, but to have just some is good and leads to salvation. Vatican II even states that Christ uses false sects as "a means of salvation." This destroys the dogma "Outside the Church there is no salvation" (Extra Ecclesiam Nulla Salus in Latin).

The post-Vatican II "popes" (especially John Paul the Great Apostate and Ratzinger/Benedict) have advanced the idea that we need to "join all the elements together" in some loose fitting One World Sect where everything is permitted except the truth. If we don't, the Church is "wounded" and "incomplete." This is rank heresy of the worst kind.

The Teaching of the True Church On Her Nature and Unity

The unity of the One True Church of Christ is perfect and complete in and of Herself, and is completely unaffected by heretics, apostates, and schismatics who leave. According to theologian Scheeben, "Anything like a vague agglomeration of different bodies is absolutely excluded. 'There is one God and one Christ,' says St. Cyprian, 'and His Church is one, and the Faith is one, and one the people joined together in the solid unity of the body in the bond of concord. This unity cannot be broken, nor the one body divided by the separation of its constituent parts.'" (See A Manual of Catholic Theology 2:347; Emphasis mine).

Pope Pius XI:  "This being so, it is clear that the Apostolic See cannot on any terms take part in their [Protestant] assemblies, nor is it anyway lawful for Catholics either to support or to work for such enterprises; for if they do so they will be giving countenance to a false Christianity, quite alien to the one Church of Christ. Shall We suffer, what would indeed be iniquitous, the truth, and a truth divinely revealed, to be made a subject for compromise?" (See Mortalium Animos, # 8, 1928; Emphasis mine).

" So, Venerable Brethren, it is clear why this Apostolic See has never allowed its subjects to take part in the assemblies of non-Catholics: for the union of Christians can only be promoted by promoting the return to the one true Church of Christ of those who are separated from it, for in the past they have unhappily left it."(Ibid, # 10, Emphasis mine).

"They add that the Church in itself, or of its nature, is divided into sections; that is to say, that it is made up of several churches or distinct communities, which still remain separate, and although having certain articles of doctrine in common, nevertheless disagree concerning the remainder; that these all enjoy the same rights; and that the Church was one and unique from, at the most, the apostolic age until the first Ecumenical Councils. Controversies therefore, they say, and longstanding differences of opinion which keep asunder till the present day the members of the Christian family, must be entirely put aside, and from the remaining doctrines a common form of faith drawn up and proposed for belief, and in the profession of which all may not only know but feel that they are brothers." (Ibid # 7; Emphasis mine).

Pope St. Pius X: "The Church alone is the depository of the truth." (Address on the Beatification of Joan of Arc, 1909).

Pope Pius XII: "They shall take particular care and shall firmly insist that, in going over the history of the Reformation and the Reformers the defects of Catholics be not so exaggerated and the faults of the Reformers be so dissimulated, or that things which are rather accidental be not so emphasized, that what is most essential, namely the defection from the Catholic faith, be scarcely any longer seen or felt...Therefore the whole and entire Catholic doctrine is to be presented and explained: by no means is it permitted to pass over in silence or to veil in ambiguous terms the Catholic truth regarding the nature and way of justification, the constitution of the Church, the primacy of jurisdiction of the Roman Pontiff, and the only true union by the return of the dissidents to the one true Church of Christ." (See "De Motione Oecumenica, On the "Ecumenical Movement"; Instruction of the Holy Office approved by Pope Pius XII, #2, 1949; Emphasis mine)

The Teachings of John Paul The Great Apostate and Ratzinger/Benedict

John Paul II: "Indeed, the elements of sanctification and truth present in the other Christian Communities, in a degree which varies from one to the other, constitute the objective basis of the communion, albeit imperfect, which exists between them and the Catholic Church. To the extent that these elements are found in other Christian Communities, the one Church of Christ is effectively present in them. For this reason the Second Vatican Council speaks of a certain, though imperfect communion. The Dogmatic Constitution Lumen Gentium stresses that the Catholic Church 'recognizes that in many ways she is linked' with these Communities by a true union in the Holy Spirit." (See Ut Unam Sint # 11, 1995; Emphasis mine).

John Paul II: "Ecumenism is directed precisely to making the partial communion existing between Christians grow towards full communion in truth and charity." (Ibid, # 14; Emphasis mine).

John Paul II: "The 'universal brotherhood' of Christians has become a firm ecumenical conviction. Consigning to oblivion the excommunications of the past, Communities which were once rivals are now in many cases helping one another: places of worship are sometimes lent out..."(Ibid # 42; Emphasis mine).

John Paul II: In Oct. 1983, John Paul II, speaking of Martin Luther on the 500th anniversary of his birth stated in a Lutheran Church,"Our world even today experiences his great impact on history." (L’Osservatore Romano, Nov. 14, 1983, p. 9; Emphasis mine)

Benedict XVI: "The Catholic Church has no right to absorb other Churches. A basic unity of Churches, yet remain Churches, yet become one Church--must replace the idea of conversion." (See Theological Highlights of Vatican II, Paulist Press: NY, 1966, pg. 61, 68--before "election" as "pope"; Emphasis mine).

Benedict XVI: "I would respond by saying that the first and most important thing for ecumenism is that we keep in view just how much we have in common, not losing sight of it amid the pressure towards secularization – everything that makes us Christian in the first place and continues to be our gift and our task. It was the error of the Reformation period that for the most part we could only see what divided us and we failed to grasp existentially what we have in common in terms of the great deposit of sacred Scripture and the early Christian creeds. The great ecumenical step forward of recent decades is that we have become aware of all this common ground and that we acknowledge it as we pray and sing together, as we make our joint commitment to the Christian ethos in our dealings with the world, as we bear common witness to the God of Jesus Christ in this world as our undying foundation." ( See "Pope" Benedict XVI's address to the representatives of the German Evangelical Church , September 23, 2011; Emphasis mine)

Martin Luther Speaks for Himself

Let's remember that besides the glaring contradictions above, Luther was himself quite evil. His idea of "justification by Faith alone" (aka "sola fide") replaces the Catholic dogma of interior justification (sin is really wiped out) with exterior justification (people remain sinners, but God covers them with the grace of Christ when they believe like "snow on dung."). As a consequence he said some pretty bad things. With which quotes below would Francis be in agreement?

Martin Luther: "Be a sinner, and let your sins be strong, but let your trust in Christ be stronger, and rejoice in Christ who is the victor over sin, death, and the world.  We will commit sins while we are here, for this life is not a place where justice resides...  No sin can separate us from Him, even if we were to kill or commit adultery thousands of times each day." (See Let Your Sins Be Strong, from 'The Wittenberg Project;'  'The Wartburg Segment', translated by Erika Flores, from Dr. Martin Luther's Saemmtliche Schriften, Letter No. 99, 1 Aug. 1521. - Cf. Also Denifle’s Luther et Lutheranisme, Etude Faite d’apres les sources. Translation by J. Paquier [Paris, A. Picard, 1912-13], VOl. II, pg. 404; Emphasis mine).

Martin Luther: "He who hears this name [God] from a Jew must inform the authorities, or else throw sow dung at him when he sees him and chase him away". (See Luther, Martin, On the Jews and Their Lies, translated by Martin H. Bertram, Fortress Press, 1955)

Bergoglio (aka "Pope" Francis) wants us to think the Church is "wounded" or "lacks full unity" and it can only be "healed" by a One World Sect because "proselytism is nonsense." The elements of sanctification and truth are present in these Protestant sects and will grow to full communion with Catholics in this new World-Wide Ecumenical Sect. Bergoglio will go and "celebrate" the corruption of faith and morals that began in Protestantism and evolved into Modernism. He will rejoice over a man who broke his priestly vows to marry an apostate nun while encouraging all manner of evil with his false teachings. Luther had a near pathological hatred of Jews. (Funny how the Modernists accuse Traditionalists of being anti-Semitic, while ignoring the real deal when it suits their purposes).

We don't need to worry about a "wounded" Church that needs healing; only be concerned with falling for Bergoglio's poison ecumenism. It's celebrating a phony "reformation" which encourages an already sick world that needs the One True Church of Christ to "let your sins be strong."
Posted by Introibo Ad Altare Dei at 3:07 AM