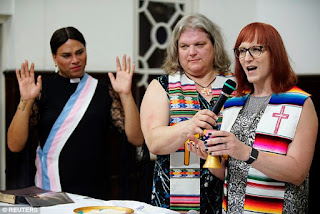 The Archdiocese of Baltimore was the premier See of the Roman Catholic Church in the United States before Vatican II. What goes on in those formerly Catholic buildings today is both detestable and morally reprehensible; just like everywhere else in the Vatican II sect. At St. Matthew's parish, "Fr." Joseph Muth encourages sodomites to "celebrate" their perversity. He goes so far as to openly meet with gay couples getting "married," and has directed them to "older gay couples in the parish" that can offer "the benefit of their experience." They give out "gay pride" t-shirts after "mass," and encourage people to attend such events as the "Pride Interfaith Celebration" composed of all religions including Wiccans (i.e. practitioners of witchcraft and paganism). "Archbishop" William Lori has met with Muth to inform him he must be in compliance with "Church (sic) teaching." If you think Muth hasn't changed anything and Lori continues to let them do evil, take one big step forward. (See https://www.lifesitenews.com/news/catholic-parish-celebrates-homosexuality-sells-gay-pride-t-shirts-after-mas). (Disclaimer: The photo above is not St. Matthew's parish [yet] but from a "mass" by transgenders in Cuba--Introibo)

If anyone believes witches and sodomites holding a "diversity celebration" and tacitly endorsed by the Archdiocese  is "over the top," an " abuse, " or some anomaly, it is none of those things. Neo-pagans, such as witches, are natural allies of sodomites. Don't be surprised when, in the not-too-distant-future, they become the norm in all Vatican II sect parishes already brimming with sodomite clergy and moral relativists. I will explore the world of Wicca, its relationship to homosexuality, and the dangers they pose to society.

Wicca is polytheistic, its pantheon consisting of the "Horned God" which is viewed as the consort of the Goddess, and the Triple Goddess herself, whose aspects are the maiden, the mother, and the crone. It is a form of Neo-paganism, since they derive their impetus from a spiritual re-emergence and restatement of ancient pagan principles. They are:

"Tolerance," towards all beliefs, is seen as a virtue because all beliefs "contain some good." Most interestingly, the "Thirteen Principles of Wiccan Belief," adopted in 1974 by the Council of American Witches states:

Finally, this disclaimer by the Wiccans, "We do not accept the concept of absolute evil, nor do we worship any entity known as 'Satan' or 'the Devil,' as defined by Christian tradition." Really? 1 Corinthians 10:20, "No, but the sacrifices of pagans are offered to demons, not to God, and I do not want thee to be participants with demons." (Emphasis mine) Notice "thirteen" principles. Covens are ideally composed of 13 members in mockery of Jesus Christ and His twelve Apostles. Covens cast spells which sometimes mock the Eucharist. They often worship in the nude. Women are seen as equals in all aspects to men, and in some places are given greater deference. In a "banishing spell" published in Canadian witch Robin Skelton's book, The Practice of Witchcraft, the first words read as follows: "If this one has hurt this other one, let him be racked with the same pain." (See The Practice of Witchcraft, Press Porcepic Ltd., 1990, pp. 179). So much for "doing no harm."

Skelton's book also contains a spell to cause a miscarriage, "Take back this gift. Let the womb release the human fish in its bubbled seas. Unclench the gut. Let the birth run out that none may be hurt in flesh or heart." (Ibid, pgs. 169-170). As a result of feminist ideology inherent within Wicca (seeing the genders as equal or females greater),  God the Father is viewed as evil (along with His Only Begotten Son), and so are the Ten Commandments which He gave to Moses. In the Wiccan world, Cain is a hero and so are the Sodomites whom God the Father judged and destroyed.

Sodomites find the "anything goes" morality of Wicca most appealing for obvious reasons. Perverts bring into the Vatican II sect Wiccan ideology, to crush whatever semblance of true morality remains. Ex-nun Mary Daly teaches specifically lesbian witchcraft. In her book Wickedary ("Wiccan dictionary"), The Beatific Vision is blasphemously defined as: "the 'face to face' vision of god (sic) in patriarchal heaven promised as a reward to good Christians; an afterlife of perpetual Boredom: union/ copulation with the 'Divine Essence'; the final consummate union of the Happy Dead Ones with the Supreme Dead One." (pg. 185)

On the "Interfaith Fairness Coalition of Maryland's" website (the organization "Fr" Muth supports) they list a panoply of false sects that push the sodomite agenda, most notably:

Some might assert, "OK, theology aside, if someone is born gay it's not his or her fault. God wants us to be accepting and welcoming. As long as they want to belong to the Church, not Wicca, what's wrong?" Answer: Unless they repent and remain chaste, a whole lot is wrong.

1. The "Born This Way" Myth. Popularized by pop icon and pervert Lady Gaga singing "Born This Way," modern science does not back up homosexuality as genetic. According to Dr. N.E. Whitehead, Common Misconceptions About Homosexuality, mygenes.co.nz, Aug. 2012, studies of identical twins show that "if an identical twin has same sex attraction the chances that the co-twin has it too are only about 11% for men and 14% for women." If DNA were the cause of homosexuality, the figure would be 100%. Further, the societal engineers who want us to accept perversion tell us "sexuality and gender are fluid (i.e. subject to change)" which undermines genetic determination. What if pedophilia were genetic? Do we "celebrate" the way they were born, or disavow and stop it? Just because something is genetic doesn't make it good, or even normal, as in the case of mutations. How could God clearly condemn in the Bible, and in the teaching of His One True Church, certain actions (homosexuality) if they are natural and normal?

2. Health Issues. In 2016, the American Medical Association conducted the largest and most representative health survey of male and female homosexuals, as well as bisexuals. As reported in JAMA Internal Medicine, they have significantly higher rates of psychological disorders, heavy drinking, heavy smoking, substance abuse, and sexually transmitted diseases than heterosexuals.

3. Violence. The Encyclopedia of Serial Killers by Michael Newton reports, "Homosexual slayers clearly have no monopoly on violence, but it is true that their crimes often display extremes of 'overkill' and mutilation...On balance, while it seems fair to say that white homosexuals sometimes fall prey to 'gay bashing' violence by bigoted 'straights,' they are far more likely to be murdered by another homosexual than in a random hate crime."


Here is why we should be concerned with a "private matter:"

True charity means telling the truth and caring for others which is motivated by love of God for His own sake and above all else. That means telling people when they are wrong. Truth and morality are not relative but absolute and unchanging. We hate the sin and love the sinner. Don't fall for the Modernist/Wiccan/Relativist lie that God "accepts you as you are." He does not; He wants you to come to Him through His One True Church and without mortal sin. He no more accepts sodomy than He does murder, defrauding laborers of their rightful wages, and oppression of the poor--the Four Sins That Scream To Heaven For Vengeance.  Ask yourself if this sounds "welcoming" and "accepting": "Or do you not know that wrongdoers will not inherit the kingdom of God? Do not be deceived: Neither the sexually immoral nor idolaters nor adulterers nor men who have sex with men nor thieves nor the greedy nor drunkards nor slanderers nor swindlers will inherit the kingdom of God." (1 Corinthians 6: 9-11).

So the next time "Fr" Muth tells you to be "accepting" and "welcoming" of unrepentant sinners and attend an "interfaith service" sponsored by Wiccans because all paths lead to the same place--please remind him that the place they all lead to is Hell.

Posted by Introibo Ad Altare Dei at 12:50 AM