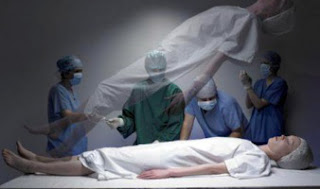 In 1975, Dr. Raymond Moody (b. 1944) published a most controversial and groundbreaking book entitled Life After Life. Dr. Moody (who impressively is a philosopher, psychologist, and medical doctor) coined the term "near death experience" or "NDE." His research began after meeting psychiatrist Dr. George Ritchie in 1965. Ritchie believed that when he was twenty-years-old, he journeyed into the afterlife for about nine minutes while clinically dead. He believed that his soul had left his body for a short time. Moody then began to investigate others who made similar claims. There was a definite pattern in what they had to report such as the feeling of being out of one's body, the sensation of traveling through a tunnel, making contact with dead relatives, and encountering a bright light during clinical death. To be "clinically dead"  means death as judged by means of medical observation of the complete cessation of a beating heart and respiration. It is distinguished from "actual death" because of the possibility of resuscitation within a reasonably short time.

Moody is convinced that NDEs are scientific proof of life after death. Skeptics have accused Moody of "cherry-picking" his subjects to fit his preconceived ideas, and both doctors and scientists have offered naturalistic explanations for NDEs. The value of NDEs has also come under fierce criticism from Protestants and conservative members of the Vatican II sect because of Moody's later research which cannot be reconciled with Christian teaching. They say NDEs are of Satanic origin to confuse the faithful. The case against Moody's later research is strong:

The NDE has been made very popular recently by the books Heaven Is for Real and Proof of Heaven, both of which had dominated the New York Times Bestsellers list. The former was also made into a 2014 movie.

For a Traditionalist, is there any truth to NDEs? Are they merely the final hallucination of an oxygen-starved brain? Are they all deceptions of the father of lies? I think that based on all the available research, there are good reasons to believe NDEs may give certain people an actual glimpse into the hereafter. What I will attempt to do below is outline some common objections to the NDEs and give a brief rebuttal to each.

1. There is bias because the researchers already believe in life after death, or they want to believe it.
That objection can easily be flipped on those researchers who try to debunk NDEs because they allegedly don't believe in life after death or don't want to believe in it. According to Dr. Bruce Greyson, professor of Psychiatry and Neurobehavioral Sciences at the University of Virginia and a highly respected researcher, "Most near death researchers did not go into their investigations with a belief in mind-body separation, but came to that hypothesis based on what their research found." (See Dr. Bruce Greyson, Commentary on Psycho-physical and Cultural Correlates Undermining a Survivalist Interpretation of Near-Death Experiences, p. 140, cited in Chris Carter, Science and the Near-Death Experience (Rochester: Inner Traditions, 2010), p. 200).

2.  Oxygen deprivation causes an NDE.
No, it doesn't account for many aspects. The research shows that many NDEs took place where the oxygen levels were being closely monitored in a hospital. The subject was able to tell what was accurately going on in his (and other!) rooms, while having sufficient oxygen in the brain. Researchers who are cardiologists and extremely familiar with oxygen deprivation, nevertheless reject it as a viable hypothesis (e.g. Drs. van Lommel, Sabom, and Rawlings who have all been published).

Fighter pilots, during rapid acceleration, will sometimes experience tunnel vision, pass out, and dream of friends/family due to oxygen deprivation. However, there is a qualitative difference between the two accounts. The pilots report a dream-like state and experience a lack of peripheral vision, which makes it look like a tunnel around them. NDEs are experienced as vivid and describe a feeling of moving through a tunnel, not seeing things in a tunnel-like way.

3.  Science does not believe in immaterial components. There is a brain, but no "mind" or "soul" independent of the brain. To believe in a soul is like believing in goblins or ghosts for which we have no scientific evidence.

Science actually does believe in components that are unseen and basically immaterial. Scientists believe in electrons which are invisible even when observed under the most powerful microscopes. Science sees their effects, so they must exist, but they function more like invisible waves than observable particles. Therefore, if we have enough evidence of the effects of a mind or soul, we should believe in it.

Are NDEs Compatible with the Teaching of the Church?

True, but clinical death is not actual death which is irreversible (except in the case of rare miracles, such as Jesus raising Lazarus). There are many reasons that God could permit such an experience, not the least of which is to give people a realization there is an afterlife, you have a purpose, and you need to get right with God. I'm not God, so I may never understand why He permits the experience, but that doesn't mean NDEs aren't real.

Did they get that information (they saw Mohammed, etc) from the experience itself, or did they assume it and make it conform to their already held beliefs? That's a big difference. Many researchers have proven that what people actually saw, and how they interpreted it, are entirely different!

In reply to (a), we are assuming we know what God would do. That's pretty arrogant.  "For My thoughts are not your thoughts: nor your ways My ways, saith the Lord.  For as the heavens are exalted above the earth, so are My ways exalted above your ways, and My thoughts above your thoughts." (Isaiah 55: 8-9). In reply to (b), this is not accurate. Beginning with Moody and continuing until today, there is a significant number of people who have frightening NDEs, mention the experience after being resuscitated, then forget about it; perhaps repressing its horror. Some people do report encounters with Hell.

Remember, an NDE does not guarantee your final destination. Just because you see Heaven doesn't mean you will go there, and the same holds true for Hell. Perhaps God is giving the one who has the experience more time to enter the Church and/or repent from sin. The repression of an NDE may also explain why, even though we all have a soul, only some people during clinical death assert they experienced it.  In response to (c), many who see pets are children. Perhaps God wants to make things as pleasant as possible for them; He is not teaching that animals have immortal souls.

NDEs are not per se opposed to Church teaching. They actually serve as evidence of life after death, and the importance of finding and living the True Faith. The materialistic explanations are caving in as more and more research in this field is being done. The theological objections are not without merit. I'm certainly not claiming that all NDE experiences are true (some people lie) or good (some are of demonic origin). The majority of these experiences are compatible with Church teaching, even if we don't know why God permits them. We should go where the evidence leads. If anyone claiming an NDE speaks contrary to Church teaching, the NDE should be spurned as either a falsehood or of demonic origin.

Just as there are true apparitions (Our Lady of Fatima) and false apparitions (Our Lady of the Roses at Bayside, New York), so too there can be true and false NDEs. We must learn to discern. As the Apostle St. John wrote under Divine Inspiration, "Dearly beloved, believe not every spirit, but try the spirits if they be of God: because many false prophets are gone out into the world." (1 John 4: 1).
Posted by Introibo Ad Altare Dei at 12:43 AM