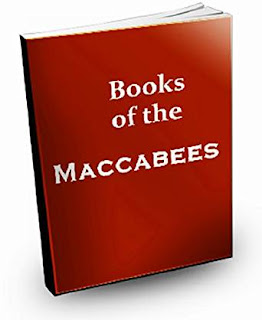 And it has thought it meet that a list of the sacred books be inserted in this decree, lest a doubt may arise in any one's mind, which are the books that are received by this Synod. They are as set down here below: of the Old Testament: the five books of Moses, to wit, Genesis, Exodus, Leviticus, Numbers, Deuteronomy; Josue, Judges, Ruth, four books of Kings, two of Paralipomenon, the first book of Esdras, and the second which is entitled Nehemias; Tobias, Judith, Esther, Job, the Davidical Psalter, consisting of a hundred and fifty psalms; the Proverbs, Ecclesiastes, the Canticle of Canticles, Wisdom, Ecclesiasticus, Isaias, Jeremias, with Baruch; Ezechiel, Daniel; the twelve minor prophets, to wit, Osee, Joel, Amos, Abdias, Jonas, Micheas, Nahum, Habacuc, Sophonias, Aggaeus, Zacharias, Malachias; two books of the Machabees, the first and the second.

The seven books which are missing in Protestant Bibles are called the Deuterocanon, or "second canon" since the sixteenth century Protestant revolt. They are the books of Ecclesiasticus, Wisdom, Tobit, Judith, Baruch, 1 Maccabees, and 2 Maccabees. The "second canon" are all the other books. The Protestants refer to the Deuterocanon as the Apocrapha, a term used to indicate non-inspired books that are closely related to Scripture, but are not part of it.

In this post, the inspiration and importance of the Deuterocanon will be explained and defended.


The Controversy
The Deuterocanon (hereinafter "DC") was accepted by the earliest extant complete copies of the Bible; the Great Codices. The Jews at the time of Christ, and the Church Fathers (with a few notable exceptions) accepted the DC as canonical. (See e.g.,theologian Breen, A General Introduction to the Study of Sacred Scripture, [1909]).  The first Father to call into question the inspiration of the DC was St. Jerome, whose Vulgate became the definitive Catholic Bible. His opinion on everything biblical was echoed by medieval  theologians; hence why more than a few rejected the DC. However, several North African councils condemned his idea that those seven books were not divinely inspired when he first announced it. Remember, the Canon of Scripture would not be defined until Trent.

The issue soon died down, with the DC left in Scripture. In 1519, heretic Martin Luther debated theologian Johann Eck on the doctrine of Purgatory. Eck cited a number of passages in support of the teaching, most notably, 2 Maccabees 12: 45-46, which reads "And because he considered that they who had fallen asleep with godliness, had great grace laid up for them. It is therefore a holy and wholesome thought to pray for the dead, that they may be loosed from sins." This is a clear and direct reference to Purgatory. Luther responded that the books of Maccabees were part of the DC and not inspired. Eck countered with references to St. Augustine and the Church local councils who accepted the DC. Luther stated the position of St. Jerome, and ever since, Protestants have made sure to keep the DC out of their bibles. If Purgatory is admitted, other Protestant heresies on grace, justification, sin, and Penance would likewise fall.

Four Lines of Argumentation That Prove the Inspiration of the DC

1. The DC is quoted as Scripture in the New Testament

One of the biggest lies leveled against the DC by Protestants is that the New Testament never references the DC. Not only is this false, but the earliest Protestant Bibles written in English show that they themselves did not hold to such an erroneous view. Many of the earliest Protestant Bibles contained cross-references, in the notes to the New Testament, to the DC ( to give but two examples, Matthews Bible [1537] and the King James Bible [1611]). When the redacting of the DC began in earnest, the cross-references in the notes were removed as well. This is where the false notion of a "New Testament free of DC references" took root.

St. Matthew 27:43 states, "He trusted in God; let him now deliver him if he will have him; for he said: I am the Son of God." This was the taunt of the Jewish leaders while Our Lord was dying on the cross. Protestant Bibles cross-reference Psalm 22:8, "He hoped in the Lord, let Him deliver him: let Him save him, seeing He delighteth in him." This does not do the passage in St. Matthew's Gospel justice.  The Jews thought that God should deliver Christ not simply because He trusted in God, but more to the point, He claimed to be the Son of God. The early Protestant Bibles correctly referenced the DC Book of Wisdom 2:18, "For if he be the true son of God, He will defend him, and will deliver him from the hands of his enemies." Clearly, the Jews accepted Wisdom as inspired because they expected Christ to be the recipient of God's deliverence if He were the Son of God as He claimed. There are other examples but time limitations (and trying to keep my posts somewhat terse) will restrict me to this solitary instance.

2.  The Jews at the time of the Early Church accepted the DC

Most modern Scripture scholars (no friends of Traditionalist Catholics) will admit that most Jews of the first four centuries after Christ continued to copy the DC in their Scripture, even after most Jews came to repudiate them (for many reasons that I will not expound upon). This would show that the Jews did originally accept them. Analogous to this is the copying and retention of the DC by the early Protestants who nevertheless denied their inspiration and derided them as the Apocrapha. The reason for this can be found in heretic Ulrich Zwingli's Preface to the Zurich Bible (1531). He wrote that the DC was retained "so that no one may complain of lacking anything, and each may find what is to his taste." (See Neusner The Babylonian Talmud: A Translation and Commentary, Hendrickson Publishers, Peabody, MA [2011], pg.91).

3. The use of the DC in Churches established by the Apostles

The North African bishop councils, following St. Augustine, affirmed that the the DC was read as Sacred Scripture in churches that had been established by the Apostles themselves (See St. Augustine, On Christian Doctrine 2:12) Pope St. Innocent I, in his letter Consulenti tibi (2/20/405 A.D.), addressed to the bishop of Toulouse reaffirmed using the Canon as given at Hippo and defended by St. Augustine.

St. Jerome based his rejection of the DC on his belief that only those books should be accepted as authentic parts of the Old Testament if they conformed to the Hebrew Masoretic Text ("HMT"). The HMT was the single normative text for Judaism by the fourth century A.D. So when the great saint was commissioned by Pope St. Damascus I to make a definitive Latin Bible, the HMT is what guided him, because all other Hebrew manuscripts in circulation had been lost. St. Jerome though that the HMT was a direct descendant of the inspired original writing. This all changed with the discovery of the Dead Sea Scrolls (1946-1956), and showed that the Hebrew Masoretic Text was not a direct descendant of the inspired original as St. Jerome erroneously believed. These manuscripts show earlier Jewish texts accepting the DC, and give secular proof to the veracity of the Council of Trent.

The term "heretic" literally means "to choose" what you will believe. The DC is a perfect example of picking and choosing beliefs. When Luther was confronted with evidence that Scripture confirmed Purgatory, he removed the DC from the Bible so he could keep the beliefs he invented as he saw fit. There are those, even today, who hide their heads in the sand from the evidence, and choose to follow Bergoglio as "pope" even as he "celebrates" Martin Luther and the 500th anniversary of his rejection of the One True Church and the complete Bible.
Posted by Introibo Ad Altare Dei at 2:30 AM