Francis And The Dark Side Of The Force 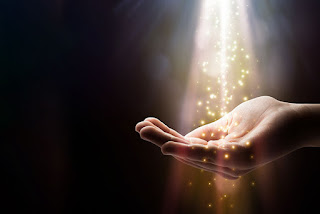 On Friday, December 15, 2017, the latest installment of the Star Wars movie franchise will premiere. The George Lucas films are riddled with pantheism, whereby "god" and the universe are one. The oft quoted "May the Force be with you," is a blasphemous attempt to replace the True God ("The Lord be with you") with an impersonal energy that binds the universe together. The so-called force may be used to perform seeming miracles such as levitation, moving objects, detecting the presence of various persons, being guided without using your senses, and healing. The force can be used for good or evil ("the dark side of the force").

Outside of science fiction movies, Jorge Bergoglio (aka "Pope" Francis), has been dabbling with dark forces in real life. According to CBS News:

Most disturbing, is that Liu Ming is a Reiki practitioner. The fact that Francis believes in, and uses Reiki, exposes his connection to pagan, demonic forces and teachings. I will put forth the facts in this post, and let my readers draw their own conclusions.

Reiki comes from the Japanese words Ki, (which is alleged to be a "universal life-force energy" that everything supposedly possesses) and Rei, which means "higher power."  Reiki claims that everything in the universe is made up of  this "higher power life-force energy" – even humans.  Thus, when someone is feeling depressed, or sick in any way, it is an indication that their energy is "out of balance."  Therefore, it is the function of the Reiki practitioner to "channel positive energy into the person," bringing them back to "balance and wholeness." The founder of this practice is generally considered to be the Buddhist monk, Mikao Usui, who claims he developed mystical power on a pagan retreat. Reiki energy entered his "crown chakra" (i.e., his head), and enabled him to heal people.

According to www.Reiki.org, "Reiki is a Japanese technique for stress reduction and relaxation that also promotes healing. It is administered by "laying on hands" and is based on the idea that an unseen "life force energy" flows through us and is what causes us to be alive. If one's "life force energy" is low, then we are more likely to get sick or feel stress, and if it is high, we are more capable of being happy and healthy."

It must be understood that the mind exists not only in the brain, but also through-out the body. The nervous system extends to every organ and tissue in the body and so the mind exists here also. It is also known that the mind even extends outside the body in a subtle energy field 2 to 3 feet thick called the aura. Because of this, it is more appropriate to call our mind a mind/body as the mind and body are so closely linked."  (Emphasis mine).

Here's what's wrong with this doctrine:
1. There is no soul as the animating principle of the body, but some impersonal "Ki energy."

2. Ki nevertheless can respond and be manipulated by thoughts and feelings, yet there is no explanation as to how or why this is known/proven.

4. It states the existence of some "aura" which is "known" to exist without any citations to a single relevant medical or scientific source.

Liu Ming, now 49 years old, is a Taoist monk. Taoism is another pagan religion. Their beliefs are:


When Bergoglio was suffering from various health problems (diabetes, gall bladder, etc), he turned to this pagan healer and his Reiki "energy-force healing."


In its October 2013 issue, the Spanish language Argentinean magazine TAO ran a story on the association between Bergoglio and Ming. We learn of some additional facts about Ming and Bergoglio. Ming:

As a result of Ming's "treatments," Bergoglio claimed he was cured, no longer takes medication, and continues to practice what Ming told him. The then "cardinal" from Argentina gave Ming a Spanish copy of the I Ching, a pagan book also known as the "Book of Changes," which is an ancient Chinese divination text.

Proving the old aphorism, "Even a broken clock is right twice each day" true, the Vatican II sect "bishops" condemned the practice of Reiki in 2009, four years before Bergoglio was elected "pope." The document entitled Guidelines for Evaluating Reiki as an Alternative Therapy, has this to say in paragraph #9:

The difference between what Christians recognize as healing by divine grace and Reiki therapy is also evident in the basic terms used by Reiki proponents to describe what happens in Reiki therapy, particularly that of "universal life energy." Neither the Scriptures nor the Christian tradition as a whole speak of the natural world as based on "universal life energy" that is subject to manipulation by the natural human power of thought and will. In fact, this worldview has its origins in eastern religions and has a certain monist and pantheistic character, in that distinctions among self, world, and God tend to fall away. (Emphasis mine)

Their conclusion:
Reiki therapy finds no support either in the findings of natural science or in Christian belief. For a Catholic to believe in Reiki therapy presents insoluble problems...In terms of caring for one's spiritual health, there are important dangers. To use Reiki one would have to accept at least in an implicit way central elements of the worldview that undergirds Reiki theory, elements that belong neither to Christian faith nor to natural science.
Without justification either from Christian faith or natural science, however, a Catholic who puts his or her trust in Reiki would be operating in the realm of superstition, the no-man's-land that is neither faith nor science.Superstition corrupts one's worship of God by turning one's religious feeling and practice in a false direction.(See paragraphs 10 and 11; Emphasis mine. The term "Catholic" is meant to denote a member of the Vatican II sect).


Bergoglio Could Not Have Been Elected Pope

Siscoe and Salza (among other Vatican II apologists) will go to great lengths to allege private judgement on the part of sedevacantists, and seek to discredit us through guilt by association (e.g. the deeply disturbed cult leader Richard Ibranyi who puts the date of the last pope at 1130 A.D.). Our detractors all miss the point that it is no longer a matter of "loss of papal office." A heretic cannot attain the office in the first place.

In addition, [by this Our Constitution, which is to remain valid in perpetuity We enact, determine, decree and define:] that if ever at any time it shall appear that any Bishop, even if he be acting as an Archbishop, Patriarch or Primate; or any Cardinal of the aforesaid Roman Church, or, as has already been mentioned, any legate, or even the Roman Pontiff, prior to his promotion or his elevation as Cardinal or Roman Pontiff, has deviated from the Catholic Faith or fallen into some heresy:

(i) the promotion or elevation, even if it shall have been uncontested and by the unanimous assent of all the Cardinals, shall be null, void and worthless;
(ii) it shall not be possible for it to acquire validity (nor for it to be said that it has thus acquired validity) through the acceptance of the office, of consecration, of subsequent authority, nor through possession of administration, nor through the putative enthronement of a Roman Pontiff, or Veneration, or obedience accorded to such by all, nor through the lapse of any period of time in the foregoing situation;

(iii) it shall not be held as partially legitimate in any way;

(iv) to any so promoted to be Bishops, or Archbishops, or Patriarchs, or Primates or elevated as Cardinals, or as Roman Pontiff, no authority shall have been granted, nor shall it be considered to have been so granted either in the spiritual or the temporal domain;

(v) each and all of their words, deeds, actions and enactments, howsoever made, and anything whatsoever to which these may give rise, shall be without force and shall grant no stability whatsoever nor any right to anyone;

(vi) those thus promoted or elevated shall be deprived automatically, and without need for any further declaration, of all dignity, position, honour, title, authority, office and power.(Emphasis mine).

While Bergoglio was "cardinal" he engaged in a practice denounced by the Vatican II "episcopate" in the USA. According--even to them--Bergoglio  "would be operating in the realm of superstition" and "accept at least in an implicit way central elements of the worldview that undergirds Reiki theory, elements that belong neither to Christian faith nor to natural science." Yet Bergoglio credits pagan life-force channeling (Reiki) with giving him health and continues to use/promote it today. According to theologian MacKenzie, "The very commission of any act which signifies heresy, e.g. the statement of some doctrine contrary or contradictory to a revealed and defined dogma, gives sufficient grounds for juridical presumption of heretical depravity."(See The Delict of Heresy, CUA Press, [1932], pg.35).

What dogma does Reiki contradict? From the First Vatican Council (1870), Dogmatic Constitution on the Catholic Faith, Dei Filius states:

The Holy Catholic Apostolic Roman Church believes and confesses that there is one true and living God, Creator and Lord of heaven and earth, Almighty, Eternal, Immense, Incomprehensible, Infinite in intelligence, in will, and in all perfection, who, as being one, sole, absolutely simple and immutable spiritual substance, is to be declared as really and essentially distinct from the world, of supreme beatitude in and from Himself, and ineffably exalted above all things which exist, or are conceivable, except Himself.


5. If anyone does not confess that the world, and all things that are contained in it, both spiritual and material, have been, in their whole substance, produced by God out of nothing; or shall say that God created, not by His will, free from all necessity, but by a necessity equal to the necessity whereby He loves Himself; or shall deny that the world was made for the glory of God; let him be anathema.

Can Bergoglio claim ignorance of this truth? Again, according to MacKenzie, "...if the delinquent making this claim [ignorance] be a cleric, his plea for mitigation must be dismissed either as untrue...or at least crass and supine...His ecclesiastical training in the seminary...[will]insure that the Church's attitude toward heresy was imparted to him." (Ibid, pg. 48).


Conclusion
I'll let my readers draw the logical conclusion from this week's post. Could Jorge Bergoglio even have attained the papacy given his involvement with pagan practices that call upon "forces" which contradict the teachings of the Church on the Nature of God? Reiki was condemned even by his own sect's bishops conference in the USA! This is yet another nail in the coffin for those who want to "recognize and resist" Francis. Our Lord said, "Even so every good tree bringeth forth good fruit, and the evil tree bringeth forth evil fruit." (St. Matthew 7:17). The fruits of Reiki are to entrap one in pagan beliefs and practices. It shouldn't be any wonder Bergoglio can say with a straight face, "I believe in God, not in a Catholic God; there is no Catholic God."

Posted by Introibo Ad Altare Dei at 12:08 AM