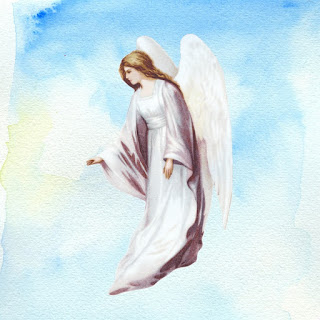 In our increasingly secular world, brought about by the evil of Vatican II, people seek to fill the void that only Christ and His One True Church can fill. Unfortunately, many seek refuge in various false religions and pagan beliefs. In the mid-1990s, there was a surge of interest in angels, which seems to be enjoying some renewed popularity. Driving through New York City, I saw a car with a bumper sticker that read "Protected by Angels." You might be wondering, "What's wrong with that?" The answer, depending on the circumstances, could be "nothing," or "everything." There was a bumper sticker to either side of the one about angels I saw on that same car. One read, "Magic Happens," and the other read, "Visualize World Peace." The driver was not Christian, but a New Ager, whose ideas about angels (and demons) are decidedly at odds with Church teaching.

This post will focus on the false teachings about both angels and demons, and will give the true teaching of the Church.


A Survey of The Angel and Occult Connection
Are there "counterfeit angels"? The Bible reminds us that  "For such false apostles are deceitful workmen, transforming themselves into the apostles of Christ. And no wonder: for Satan himself transformeth himself into an angel of light." (2 Corinthians 11: 14-15; Emphasis mine). Angels are friends of God who would never do (or induced anyone to do) that which is contrary to the Will of God. In Deuteronomy 18:10-12, we read, "Let no one be found among you who sacrifices their son or daughter in the fire, who practices divination or sorcery, interprets omens, engages in witchcraft, or casts spells, or who is a medium or spiritist or who consults the dead. Anyone who does these things is detestable to the Lord; because of these same detestable practices the Lord your God will drive out those nations before you." (Emphasis mine).

The teaching of the Church echos these prohibitions listed in Deuteronomy. According to theologian Jone, "Spiritism claims to be able to communicate with the spirit world and endeavors to establish such commerce with it. Although spiritism is for the most part fraud, still the intention alone to enter into communication with spirits is gravely sinful. Therefore, it is mortally sinful to conduct a spiritistic seance or to act as a medium." (See Moral Theology, pg. 100; Emphasis mine).

With this in mind, let's see what some people are claiming is being performed by "angels:"

It is obvious that these "angels" are demons. However, one of the leading "experts on angels"  mentioned above, Rosemary Ellen Guiley, a member of the Vatican II sect, seeks to counter this objection immediately to ensnare souls in evil practices. On page 217 of her book she writes,

If we start mistrusting the agents of light, fearing that they are demons in disguise, then we paralyze ourselves—which is precisely what the dark side wants. They would like us to trust nothing and encase ourselves trembling in fear. Fear is the best weapon the darkness has. Fear is the fertile breeding ground for all evil…. The engines of darkness have terrible power, but nonetheless, they cannot stand up to the greater, more awesome power of light and love. (Emphasis mine).

Delusions About Demons
On the flip side, there are also many incorrect ideas about demons that I've read in both books and online sources. In order to effectively battle an enemy, you must first "know thy enemy." Here are three incorrect beliefs about demons:
This theory claims a pre-Adamic race existed on Earth before it became "dark and void" (See Genesis 1:2). These human-like creatures lived under the government of God and were presided over by Lucifer, "the anointed cherub that  covereth" (See Ezekiel 28:14). When these pre-Adamites joined Lucifer in revolt against God, a disaster fell upon the Earth, killing all inhabitants prior to Adam and Eve. The souls of these creatures roam the Earth seeking to possess people because they were meant to be united to flesh.

Errors: Despite what New Age literature would like you to believe, there is not even a hint in the Bible or Church teaching that would justify belief in any intelligent creatures upon Earth prior to our First Parents. It is also heretical in that it denies Hell, and has God leaving rational souls "wandering about the Earth" to possess human bodies. The original thesis was adopted by racists who claimed whites (or Gentiles) came from pre-Adamites, and non-whites (or Jews) came from Adam and Eve.This was to justify ideas that some had of "racial superiority." The New Age version puts a twist on it to explain the origin of demons.
(For more details of this erroneous opinion, See http://www.newadvent.org/cathen/12370a.htm)

This theory comes from a book written over 50 years ago. In 1968, Eric Von Daniken wrote a runaway bestseller entitled Chariots of the Gods. It sold more than seven million copies worldwide and was made into a movie of the same name in 1970. The thesis of the book is that extraterrestrials came to Earth and are the basis of religion. For example, the angels of the Bible were really aliens in spacesuits, and the destruction of Sodom and Gomorrah was by an alien nuclear weapon. These aliens also allegedly explain the pyramids of Egypt and Stonehenge which were built by them. Hence, demons are "evil aliens" that come to Earth to wreak havoc.

Errors: It denies the existence of God. It also fails to explain why "evil aliens" would not just take over. Scientifically and historically, there is so much wrong with it, I would need another post to explain it all. For a great and thorough refutation of Von Daniken's nutty theory, See Crash Go The Chariots by Clifford Wilson.

This theory is purely pagan. It teaches that good people who die will have their souls assume a "god-like" state in Heaven, while the evil who die will roam the Earth to incite the living humans to do evil. This pagan conception (with its roots in ancient Greek myths), has been used by Hollywood in movies. In the horror movie franchise Nightmare on Elm Street, the main character of Freddy Krueger is the maniacal killer and indestructible soul of a deceased child murderer.  In Child's Play, a doll is possessed by the soul of a dead voodoo strangler.

Errors: The souls of the Blessed in Heaven do not become "god-like," or "demi-gods," rather they enjoy the Beatific Vision of God for all eternity. Likewise, the souls of the damned suffer the pains of Hell forever; they do not "roam the Earth."


The Teaching of the Church
The following section is taken in large part from the eminent theologians Tanquerey, A Manual of Dogmatic Theology, (1959), 1:371-393 and from theologian Ott, Fundamentals of Catholic Dogma, [1955], pgs. 114-122. Theologian Pohle is cited on one point, as is theologian Delaporte, and are given due attribution.

1. In the beginning of time God created spiritual essences out of nothing. It is a dogma declared by the Fourth Lateran Council and the First Vatican Council that "simultaneously at the beginning of time He created from nothing both spiritual and corporeal creation, angelic and mundane." The creation of the angels is directly attested to in Colossians 1:16, "For in him were all things created in heaven and on earth, visible and invisible, whether thrones, or dominations, or principalities, or powers: all things were created by him and in him." (Four of the angelic choirs are mentioned; Emphasis mine).

2. The number and hierarchy of the angels. There is no definitive teaching on how many angels exist, although it is certain they are very numerous. Apocalypse 5: 11, "I heard the voice of many angels...and the number of them was thousands of thousands." The so-called "orders" or "choirs" of angels are not an article of faith, but the theologians hold it to be a theologically certain truth. The theological schools have put them into three hierarchies with three choirs in each hierarchy. The supreme hierarchy has the Seraphim, Cherubim, and Thrones. The intermediate hierarchy is composed of the Dominations, Virtues, and Powers. The lowest hierarchy is made of the Principalities, Archangels, and Angels. It is speculated that the difference in rank is due to the supreme hierarchy assisting at the Throne of God and getting their orders directly from Almighty God Himself. They then hand these orders down to the intermediate hierarchy which, in turn, hands them down to the lowest hierarchy, and the angels bring messages (when necessary) to men. The name angel means "messenger."

3.  The angels have an intellect superior to men and are endowed with free will. The angels were given a test, like humans, to earn the Beatific Vision. They were subjected to a probation which a number failed and became demons in Hell. The angels are vastly superior to humans, but cannot produce a true miracle which is something only God can do. The leader of the rebellious angels became known as "Satan" or "adversary" and it is conjectured that approximately one third of the angels followed his rebellion against God, Who created and condemned them to Hell. What was the test? We don't know for certain. Most theologians agree it was a sin of pride. Some theologians speculate that they did not want to serve God. Other theologians, most notably the great Suarez, teach that the sin of pride was in refusing to obey and worship God the Son when it was made known He would take on a human nature (Hypostatic Union).

4. Every human being has a Guardian Angel who should be venerated and invoked. There are four points on this:

According to theologian Delaporte, "Although very rare in ordinary life, obsession is very frequent in the heroic lives of the Saints...Persons of a nervous temperament and lively imagination, imagine themselves haunted by the  Devil, when there is nothing of the kind. People should not believe in obsession without the most convincing proof." (See The Devil, Does He Exist and What Does He Do?, [reprint from 1871], pgs. 129-130).  We must be on guard against Satan, yet not ascribe anything to direct demonic activity without ruling out natural causes.

Conclusion
Angels are very real. Unfortunately, so are the fallen angels. We must understand Church teaching about both. It is wonderful to pray and to be devoted to our Guardian Angel, St. Michael the Archangel, St. Gabriel, St. Rafael, and the Choirs of angels. However, we must be careful that we are are really praying to the angels, and not some New Age counterfeit. If anyone claims "angels" revealed something to them, is that so-called revelation at odds with Church teaching? Before you buy any book that references angels, check if there is anything regarding faith or morals that is incompatible with Church teaching, and therefore equally incompatible with the angels of God. When it comes to demons, we must understand what they really are so as not to get involved with other errors.

"My people are destroyed from lack of knowledge. Because you have rejected knowledge, I also reject you as my priests; because you have ignored the law of your God, I also will ignore your children." (Hosea 4:8). Make sure you understand Church teaching before getting involved with anything claiming to be "angel devotion" or something to "keep away evil spirits/demons." Truly, fools rush in where angels fear to tread.

Posted by Introibo Ad Altare Dei at 12:47 AM