The Phony Apparition Of A False Sect 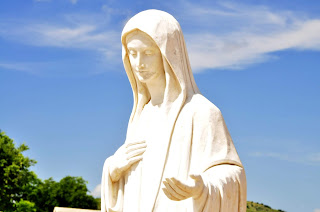 One year ago, on May 12, 2019, the now Unholy See occupied by the false pope and Argentinian apostate, Jorge Bergoglio, officially permitted pilgrimages to Medjugorje. Most people, even the irreligious, have heard about the alleged "apparitions" of the Blessed Virgin Mary that began in 1981 and supposedly continue to this very day. Bergoglio has tacitly given credence to the biggest hoax regarding an apparition of the Blessed Mother. (See https://cruxnow.com/church-in-europe/2019/08/vatican-confirms-medjugorje-approval-by-joining-youth-festival/). It is obvious that a false pope would approve a false apparition. However, it goes farther than that. Medjugorje perfectly reflects everything that is wrong with the Vatican II sect.

Many people have asked why I disbelieve the alleged apparitions of Medjugorje when so many flock there and claim to be "healed," or "spiritually enlightened." What I've done for the purposes of this post is to condense the large volume of writings on the apparition into a concise summation of everything that's wrong with it. There are members of the Vatican II sect that might convert to the One True Church, but these "apparitions" keep them in Bergoglio's clutches. To write on every aspect of an almost thirty-nine year continuing so-called apparition would take more than a hundred posts in order to fully cover what's wrong. What I've done is to give the most salient points under four main categories dealing with the serious defects regarding: the "seers," the "Blessed Virgin," the clerics involved, and the content of the messages. It should (God willing) be enough to remove any doubt from a Traditionalist's mind that Medjugorje is a Satanic fraud, and will hopefully provide enough information to keep anyone you care about away from it (or even to abandon it).


A Brief Background
The alleged apparitions began on June 24, 1981 in the small town of Medjugorje in Bosnia-Herzegovina. The "seers" were four boys and two girls; to wit: Mirjana Dragicevic, Marija Pavlovic, Vicka Ivankovic, Ivan Dragicevic, Ivanka Ivankovic and Jakov Colo. Three were born in 1965, one in 1964, one in 1966, and one in 1971. (Due to the length of their surnames, I will refer to them by their first names). According to the official website medjugorje.org: The BVM has come there "In Her own words She tells us, 'I have come to tell the world that God exists. He is the fullness of life, and to enjoy this fullness and peace, you must return to God'.

Our Lady's mission is one of peace. She has come to earth to reeducate us and to help us convert and recenter our lives back to God. Our Lady's role has always been one of guiding people to Her Son, Jesus. What an amazing opportunity we have before us! Our Lady's call to conversion is urgent, and we should respond with all our hearts." The six seers (referred to as "visionaries") have received apparitions of the Blessed Virgin Mary since June 24, 1981. In addition to Her public messages, Our Lady is to give each of the six visionaries a total of ten "secrets" of happenings that will occur on earth in the near future. Some of the secrets pertain to the whole world while others concern the visionaries themselves or the local village. Only one of the secrets has so far been revealed by the visionaries. In the third secret Our Lady has promised to leave a supernatural, indestructible, and visible sign on the mountain where she first appeared. "Our Lady" said: "This sign will be given for the atheists. You faithful already have signs and you have become the sign for the atheists. You faithful must not wait for the sign before you convert; convert soon. This time is a time of grace for you. You can never thank God enough for His grace. The time is for deepening your faith, and for your conversion. When the sign comes, it will be too late for many."

Finally, we are told, "Since the apparitions began in 1981, approximately 40 million people of all faiths, from all over the world, have visited Medjugorje and have left spiritually strengthened and renewed. Many bring back stories of miracles in the form of healings (of mind, body and spirit), supernatural visual signs, and deep conversions back to God. You owe it to yourself and your loved ones, to investigate with an open mind and heart the messages which are given to us by Our Lady of Medjugorje. I invite you to read these messages and decide for yourself how they will affect your life and that of your family." (Emphasis mine). I have accepted their invitation, and my findings on how these messages will affect anyone foolish enough to get involved, follows in the rest of this post. My sources will be listed prior to the conclusion.


Problems with the "Visionaries"


Sources
Davies, Medjugorje After Fifteen Years: The Message and the Meaning (1998)
Foley, Understanding Medjugorje: Heavenly Visions or Religious Illusion? (2006)
Laurentin & Ljudevit, Is the Virgin Mary Appearing at Medjugorje (1988)
Laurentin, Medjugorge Testament: Hostility Abounds, Grace Superabounds (1999)
Weible, The Final Harvest: Medjugorje at the End of the Century (1999)
Official Medjugorje website: medjugorje.org
Various websites that have referenced and corroborated the information above.
The works by "Fr." Laurentin are pro-Medjugorje as is the official website; the other sources are critical.

Conclusion
I have frequently wrote against those I label "Apparitionists:" They are people who exalt private revelations and apparitions whether approved by the Church (such as Our Lady of Fatima and Our Lady of Lourdes) or not (such as Our Lady of the Roses or Garabandal) over the teaching of the Church. It should be painfully apparent how placing these apparitions over doctrine leads to people being trapped in falsehood. Whether Satanic, fraudulent, or a combination, one thing is certain: they do not come from or lead to God, and the Blessed Virgin Mary never appeared there.

Now, the Vatican II sect has approved pilgrimages to a place where heresy is taught, people are swindled out of their hard-earned money to make phony, disreputable visionaries rich, and it was promoted by invalid priests who led debaucherous, pagan, evil lives. If anyone thinks a true pope could approve anything connected with this abomination, I question not only their faith, but their sanity.
Posted by Introibo Ad Altare Dei at 12:06 AM