Is Mary Our Co-Redemptrix? 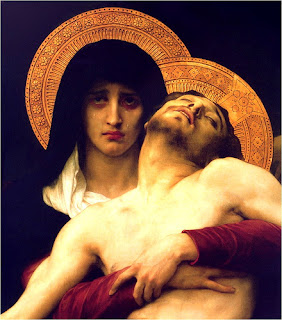 The spurious "Benedictine brothers" of the "Most Holy Family Monastery," Fred and Bobby Dimond, are damning more people to Hell. If anyone should disagree with their ever changing opinions on any given subject, they don't hesitate to claim that person is on the road to perdition. The Dimonds suffer from a condition endemic among those who deny Baptism of Desire (BOD) and Baptism of Blood (BOB), namely, the refusal to submit to the authority of the Magisterium. According to them, only infallible decrees are to be believed, and then only their twisted interpretation of them. The approved pre-Vatican II theologians are to be spurned, as are any decrees of Roman Congregations (and even of the popes themselves), if they don't agree with their novel interpretation of some infallible decree.

The latest case in point, is an article on the Most Holy Family Monastery (MHFM) website that declares anyone who gives Our Blessed Mother the title Co-Redemptrix is a heretic. The title Co-Redemptrix has pre-Vatican II theologians divided. Some approve and advocate for the title, and others feel it should be a title denied to her as it is unbecoming Our Lady. Neither side declares the title to be a matter of heresy or worthy of some censure short of heresy. As the Dimonds set themselves up as the ultimate arbiters of truth, my post will (a) explain why they are wrong and (b) give the arguments of the pre-Vatican II theologians (pro and con) as to the title Co-Redemptrix. The Church has never decided the matter and, unlike Fred and Bob, I realize I have no authority to settle the issue. Traditionalists are free to adopt either position on giving Our Blessed Mother the title Co-Redemptrix.

The Dimond brothers attack those who wish to honor Our Lady with the title Co-Redemptrix as heretics because it (allegedly) contradicts the infallible teaching of the Council of Trent. They write:

Pope Pius IV, Council of Trent, Sess. 25, On Invocation, Veneration and Relics of Saints, and on Sacred Images, ex cathedra: “…the saints, who reign with Christ, offer up their prayers to God for me; and that it is good and useful to invoke them suppliantly and, in order to obtain favors from God through His Son JESUS CHRIST OUR LORD, WHO ALONE IS OUR REDEEMER and Savior….But if anyone should teach or maintain anything contrary to these decrees, let him be anathema.” (Denz. 984-987) (Emphasis in original).

What the Diamonds, in their duplicity, choose to omit are the following words between the ellipsis, "and that they think impiously who deny that the saints who enjoy eternal happiness in heaven are to be invoked, or who assert that they do not pray for men, or that our invocation of them to pray for each of us individually is idolatry, or that it is opposed to the word of God and inconsistent with the honor of the one mediator of God and men, Jesus Christ...(Emphasis mine). It's clear that Trent was condemning the Protestants who think that because there is ONE MEDIATOR (not two or more--See 1 Timothy 2: 5-6), that saints are not to be invoked and cannot pray and intercede for us without derogating from the one Mediator, Jesus Christ. The Dimonds have no problem calling Our Lady Mediatrix, with no fear of minimizing Our Lord's unique role as the one Mediator. Likewise, Trent was not defining Christ to be the only Savior so as to exclude the possibility of Our Lady having a secondary and subordinate role in redemption. Just as Mary has a role in dispensing all grace (subordinate to and united with Her Divine Son) so as to merit the title Mediatrix without dishonoring or denying Her Son as the one and only Mediator, the title Co-Redemptrix would be given in the same manner.  So much for their contorting the meaning of Trent, just as they do in regards to its decrees on Baptism and the sacraments.

What about the theologians and popes who spoke of Mary as having a role with Her Divine Son in the redemption of humanity? According to MHFM, "There are a few non-infallible quotations that people bring forward to attempt to show that Mary is Co-Redemptrix.  The answer is that they are not infallible and they are simply wrong.  They cannot be defended." Well, that settles it! They were not infallible, and we only need to believe those statements that are infallibly defined (or so the Feeneyites contend). These theologians and popes were unaware that the Council of Trent infallibly defined that Christ alone redeemed us to the exclusion of any cooperative role of Our Blessed Mother. Wouldn't that make them notorious heretics who would thereby lose their ecclesiastical office (in the case of a pope)? What good is having a Teaching Authority which is unable to preserve Her members from the errors of errant theologians?  Don't expect logical answers anytime soon from our wannabe "Benedictines."

As I wrote above, the Church has not settled the question as to whether or not Mary is to be invoked under the title Co-Redemptrix. I will therefore put forward the teachings of two eminent pre-Vatican II theologians; Joseph Pohle who opposes the title, and Juniper Carol, who defends the title.

(b) The title never belonged to the Blessed Virgin before the 16th century and is the invention of recent theologians.

(c) Mary might be though of as acting in a priestly capacity. Any/all such titles attributed to Mary, such as "priestess," were solemnly condemned by the Supreme Sacred Congregation of the Holy Office in 1916, and again in 1927.

(d) The title Mediatrix most appropriately and comprehensively describes Our Lady's part in the Redemption, which title is sanctioned by primitive Christian usage and embodies all that can be said on the subject.
(See Mariology, [1916] pgs. 122-123)

2. The Case For Mary Being Called Co-Redemptrix (Carol)

(a) Redemption designates the sum total of meritorious and satisfactory acts performed by Christ while on Earth, offered to the Eternal Father in and through the Sacrifice of the Cross, in virtue of which the Eternal Father was moved (humanly speaking) to reinstate the human race into His former friendship. When we say Mary is Co-Redemptrix of humanity, we mean that together with Christ (although subordinately to Him and and in virtue of His power) She atoned or satisfied for our sins, merited every grace necessary for salvation, and offered Her Divine Son on Calvary to appease the wrath of God, and that as a result of this, God was pleased to cancel our debt and receive us into His former friendship. This co-redemptive role of Mary actually began when She accepted to become the Mother of God by her own free will.

(b) Pope Benedict XV, in his Apostolic Letter Inter Sodalicia (March 22, 1918), wrote, "To such extent did she (Mary) suffer and almost die with her suffering and dying Son, and to such extent did she surrender her maternal rights over her Son for man's salvation, and immolated Him, insofar as she could, in order to appease the justice of God, that we may rightly say that she redeemed the human race together with Christ."

(c) Pope Pius XI called Our Lady Co-Redemptrix at least six (6) times. In the radio broadcast to the world at the solemn closing of the Jubilee Year which commemorated the Redemption of humanity (April 29, 1935) he prayed, "O Mother of piety and mercy who, when Thy most beloved Son was accomplishing the Redemption of the human race on the altar of the cross, didst stand there both suffering with Him and as a Co-Redemptrix; preserve us we beseech thee, and increase day by day, the precious fruit of His Redemption and of thy compassion."

(d) Pope Pius XII, in his encyclical Ad Coeli Reginam (October 11, 1954) distinguishes Mary's role in the Redemption from her role as Mediatrix of All Grace.

(e) On November 26, 1951, the entire Cuban hierarchy petitioned Pope Pius XII for a dogmatic definition of Mary as Co-Redemptrix. An entire nation of bishops felt that it could and should be defined.

(g)   When the Church teaches Christ alone is our Redeemer, they are referring to the primary, universal, and self-sufficient causality of Christ in the redemptive process which does not exclude Mary's secondary and totally subordinate cooperation which drew all its efficacy from the superabundant merits of her Divine Son.

(i) Christ's merits have infinite value, so how can Mary's cooperation add anything to the Passion? Mary did not add (and could not add) anything to Christ's merits. However, God was pleased to accept her satisfaction together with Christ as a fitting way of making her the Second Eve, even as Christ was the Second Adam.
(See Mariology, [1956] pgs. 56-65)

Conclusion
When the Church has not settled a question and leaves it open to discussion among the theologians, Traditionalists are free to accept any answer the theologians offer as long as it is not censured by the Magisterium. Such is the case on whether the title Co-Redemptrix properly belongs to Mary. Notice however, how the strongest (and most numerous) arguments come down on the side favoring Mary as Co-Redemptrix. Theologian Pohle's objections are more about the fear of misunderstandings that could derogate from Christ's unique salvific role, not a condemnation of the correct understanding of Mary's role in redemption. Personally, I believe Mary is our Co-Redemptrix. However, that's all it is--one layman's opinion based on the teachings of the popes and theologians. I will not arrogate unto myself alleged Magisterial authority and issue false condemnations of people who disagree. I will leave all that up to Fred and Bobby Dimond, the self-anointed "Benedictine brothers" at Most Holy Family Monastery.

Posted by Introibo Ad Altare Dei at 2:25 AM