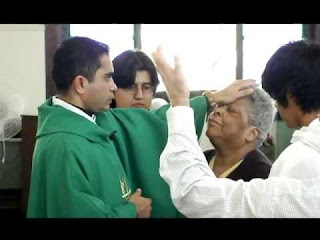 They can heal you; or so they claim. Fr. Ralph DiOrio, Fr. Francis Macnutt, "Fr" Richard McAlear, and "Fr" Fernando Suarez are just a few past or present members of the Vatican II sect clergy claiming to be able to heal people. Their services are always packed, unlike the typical Novus Bogus "mass" where the Church is near empty. As Christ said, "Unless you see signs and wonders, you believe not." (See St. John 4:48). God can and does heal people. Miracles can and do happen. However, one must discern what really comes from God, and what does not. Unfortunately, many people get trapped into staying in the Vatican II sect for this very reason. People will say that it must be the True Catholic Church because God would not permit such signs and wonders otherwise. This post will examine some well-known "healers,"  some arguments to help those who believe in them to see the truth, and give some signs of false healing miracles.

1. "Fr" Richard McAlear was "ordained" in 1970, and began his "healing ministry" in connection with involvement with the Catholic (sic) Charismatic Movement in 1976. He says a "healing mass" in which "After attending Father McAlear's healing mass, many individuals experience emotions that are sometimes too powerful to express in human language; all experience a deep peace." (See http://www.frmac.org/about-the-ministry.html)

2. "Fr" Fernando Suarez was "ordained" in 2002 and is currently 50 years old. He is Filipino and on January 26, 2008, two people died and seven were rushed to James Gordon Hospital, Olongapo City while waiting for Suarez' "healing mass." Juanito Eleazar, 69, was one of those who died. She had a heart attack amid more than 15,000 worshipers having lined-up

3. Fr. Ralph DiOrio was ordained in 1957. He claims that "On Sunday, May 9th, 1976 (Mother’s Day), Father Ralph Anthony DiOrio, Jr. was openly blessed with the Holistic Charisma of Healings." (whatever that means). He claims that he knew he had the "gift of healing" his whole life. He is quoted in People magazine as saying, "Whether church officials of any denomination accept us or not, we’re here to stay. That’s God’s plan, not mine." His "healing ceremonies" resemble a Protestant revival. He retired January 2017.

4. Fr. Francis MacNutt was ordained in 1956. He became involved in the Catholic (sic) Charismatic Movement during the late 1960s. In 1980, he broke his vows to "marry" a woman more than 20 years his junior and set up a "healing ministry." In 1993, the Vatican II sect granted him a "dispensation" from his vows and "Bishop" John Snyder performed their Church wedding in Florida. In 2007, the Modernist Vatican co-sponsored an international conference with his "Christian Healing Ministries" for 450 Catholic (sic) leaders from 42 countries. Now, turning 92, he turned the organization over to his concubine.

Most of those caught up in these "healing services" do not want to hear of demonic influence (which probably occurs in some of them). They are not open to hearing that Satan will gladly cure a malady (inflicted by him) in order to bring about the "cure" and keep a soul in a false religion leading to perdition. Many so-called healings are the result of the power of suggestion. Some ailments are caused by the power of suggestion (known as psychosomatic illness). So too, can the mind cure certain ailments. According to Dr. Paul Brand, who studied such cases and co-published an article in Christianity Today entitled, "A Surgeon's View of Divine Healing" ( issue of November 25, 1983), he cites the following documented examples:

Most of these "healing services or masses" are conducted like Protestant revivals, where the emotions of those present are worked up to the point of making them susceptible to induce certain cures. Point to be made: tell those involved with these "healing masses" that mental suggestion, charlatans who place false people in the audience to be "healed," and demonic activity to dupe people, can all be possible causes of "miraculous cures."


What Does The Church Teach Concerning Miracles?

We must remember miracles:

(Above taken from the 1917 Catholic Encyclopedia)


Ask anyone who is caught up in these "healing masses":  To what doctrine of faith and/or morals do they attest? That false sects are a "means of salvation"? That "there is no Catholic God"?

Do any of the aforementioned healers seem especially holy?

What benefits are given? "Emotions and a feeling of deep peace"?

1. The "Healer" claims "you must have faith" and "If you don't believe strongly enough, God can't heal you." God is in control of the universe and faith is not some condition without which He cannot act. God can cure whomever He wishes, in His Divine Providence. Someone without faith may be cured because of others praying for them, or because of a greater spiritual good that will result for the one healed, or perhaps another. Of the twenty-five (25) miracles Christ performed as recorded in the Bible, fifteen (15) were done with no faith on the part of the recipient (e.g., the healing of the ear of Malchus in St. Luke 22: 49-51). On the other hand, psychological healings (power of suggestion) does require belief--not in the true faith, but in the "healer" or even a placebo.

2. The "Healer" needs to touch you or have you place your hands on some object (blessed or not).
God does not need anyone to touch anything to heal. Consider how Christ brought Lazarus back from the dead without touching him, and He healed the centurion's servant from afar. Making contact with people (or objects--"put your hands on the TV and be healed" as those phony Protestant "televangelists" would declare back in the 1970s and 80s) is part of a psychological build up.

3. The "Healer" claims the cure is gradual. Miraculous cures are instantaneous and permanent. People who claim they "begin to feel better" and then go to doctors to complete the "miracle" shows a true case of psychological healing, not Divine Intervention.

Don't let yourself or others get taken in by "healing masses" and "healing services" of Vatican II sect clergy. They are false miracles (many psychological cures) in the context of a false religion and a false "mass" (Novus Bogus). God will not ratify a false sects' teachings with His Power. Pray to the Divine Physician to be healed, but also remember His warning, recorded in St. Matthew 24:24, "For there shall arise false Christs and false prophets, and shall show great signs and wonders, insomuch as to deceive (if possible) even the elect." (Emphasis mine).
Posted by Introibo Ad Altare Dei at 3:05 AM