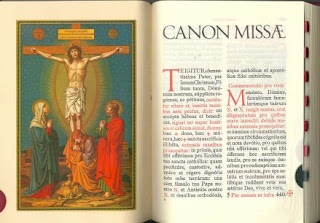 This is bound to be controversial, but understand: (a) I'm not a theologian, nor do I claim to be one. I'm just trying to find my own Catholic way through the Great Apostasy. There are issues that are not (and cannot be) settled without a pope. This is one of them. (b) Feel free to disagree with me. I'm just expressing my opinion based on the principles taught by the Church, and I'm comfortable with the conclusions I have reached before God. It is possible that someday I may change my mind on this issue as I'm always open to fraternal correction because I try to follow the evidence where it leads.

Fr. Cekada, like Mr. Omlor,  writes about the problem of "...a traditional Latin Mass offered by a validly ordained priest who utters a phrase in the Canon referring to Benedict, our Pope. This practice is followed by all priests who offer the recently instituted Motu Masses, as well as by priests of the Society of St. Pius X (SSPX), its affiliated organizations and the majority of 'independent' traditionalist priests." These Masses are referred to as Una Cum Masses after that phrase in the Canon which translates as "together with." What does it mean to offer Mass "together with Francis, Our Pope"? Is it permissible to attend?

Mr. Omlor quotes from theologian  Father Maurice de la Taille, in his book Mystery of Faith, 2: 316-318:
"This [i.e. certain ancient customs] was all the more reasonable, because priests gradually became more accustomed to commend no living person in these public suffrages of the Church, except those as could be reckoned among those with whom he was considered to be offering the sacrifice."

He continues, "This brings out the fact that the celebrating priest offers the Mass with those whose names are mentioned, who in a sense become co-offerers. Hence Benedict XVI[now Francis] is a co-offerer in Masses of priests who recite his name in the Te Igitur."

(1) Adjective modifying Church = one with, or united with: "The heretic/false pope Bergoglio is united to the Catholic Church and vice versa."

(2) Adverb modifying we offer = we offer together with: "The heretic/false pope Bergoglio jointly offers the Holy Sacrifice of the Mass along with the priest and he Church."

(3) Appositional link with Church = for thy Church, which includes:
"The heretic/false pope Bergoglio is among the members of the Church for whom the priest and the Church intercede through the offering of the Mass."

(4) Coordinating conjunction with Church, bishop, all true believers = and for Thy servant, the pope: "The
priest and the Church offer the Mass for the servant of God and heretic/false pope Bergoglio.

Hopefully, all now see why this issue is important. We cannot pray "together with" a heretic. That would be the mortal sin of communicatio in sacris, described in Canon 1258 of the 1917 Code of Canon Law. According to canonists Abbo and Hannon, "The reasons for this prohibition are founded in the natural and divine positive law. Among them are the following: the Catholic Church is the only Church in which, by divine ordinance, worship may be rendered to God; such communication with non-Catholics in their services involves a threat of perversion to Catholics or at least the danger that they will gradually become indifferent in religious belief; Catholics who observe it may take scandal from it; and non-Catholics may see in it a quasi-approbation of their services or of their erroneous belief...Though not mentioned by the Code, the active and public participation by non-Catholics in Catholic worship is always forbidden, since it would promote indifferentism through the impression given that there is no essential difference between the Catholic Faith and the errors of the sects. " (See The Sacred Canons 2: 512-513).

I agree that Masses that mention Bergoglio should be avoided whenever possible and the Mass of a sedevacantist should be the ideal. However, there are reasons I must respectfully disagree with Mr. Omlor and Fr. Cekada that they cannot be attended under pain of sin.

1. In the early nineteenth century, the king was mentioned by name in England within the Canon.

This would show that interpretation # 4 above is correct. The Mass is offered for the heretic, not in union as co-offerers. It is offensive to pious ears to believe that Pope Pius VII would allow Mass to be offered with the Anglican heretics King George III and IV. (See https://archive.org/details/a550137400unknuoft). Mr. Omlor cites theologian de la Taille: "Hence were anyone to mention by name an infidel, heretic, a schismatic or an excommunicated person (whether a king, or a bishop, or any other [e.g. Ratzinger] ), either in the prayer Te Igitur or in our commemoratio pro vivis [i.e. the commemoration of the living in the second prayer of the Canon], he would certainly violate the law of the Church." Obviously, this is mere ecclesiastical precept, not one of divine positive law or natural law. Therefore, we cannot be talking about the sin of communicatio in sacris. There was an allowance for the King of England under Pope Pius VII. If a priest is mistaken about the identity of the pope, he may objectively violate a precept of the Church, but be subjectively guiltless. Furthermore, a breach of a precept in good faith is not "contagious." You do not thereby sin, especially in the current Great Apostasy, where there is a grave necessity for the reception of the sacraments.  But isn't the priest speaking a lie by calling Francis "our pope"? Not necessarily, as I shall set forth the reason why below.

2. Would mentioning Bergoglio in the Canon effectuate the sin of communicatio in sacris by being schismatic?
Going back to Canon 1258 and its proper interpretation by canonists Abbo and Hannon, how does the name of Bergoglio turn the Mass into a non-Catholic service? Fr. Cekada cites theologian Merkelbach: "The Sacrifice of the Mass," says the theologian Merkelbach, is directly offered only for members of the Church."
For this reason, the Church does not offer intercessory prayers for heretics and schismatics during the course of the Mass, nor can a heretic or a schismatic be mentioned by name in a liturgical prayer." (Internal citation omitted). Again, how does this square with mentioning the King of England? The prohibition is purely ecclesiastical. Furthernore, according to theologian Szal, "...a schismatic professes belief in the sovereign power and primacy of the Pope, but out of malice refuses to be subject to him and obey him as the Head of the Church and the Vicar of Christ on earth." (See The Communication of Catholics with Schismatics, [1948], pg. 2) It is precisely because the priest does not want to risk being schismatic that he recites the name of Bergoglio. He is not acting out of malice to refuse obedience to a real pope, nor is he in actual union with Bergoglio. Una Cum Masses cannot be considered schismatic.

Does the Mass of an SSPX priest  "...involve a threat of perversion to Catholics or at least the danger that they will gradually become indifferent in religious belief; Catholics who observe it may take scandal from it; and non-Catholics may see in it a quasi-approbation of their [non-Catholics] services or of their erroneous belief..."? (See Abbo and Hannon, above).

I don't think that it necessarily would. Some SSPX priests are "crypto-sedevacantists" themselves, and are afraid of expulsion. Remember that although both logical and true, the position that Bergoglio is not pope is not de fide. The SSPX priests (as of this writing) are not in actual union with Modernist Rome and hold to the faith by rejecting the errors of Vatican II. I agree it is not ideal to mention the false pope. However, I can't say it is a non-Catholic service or a sin to attend. Those not strong in the Faith may need to stay away. How vocal (if at all) is the priest about Francis as "pope"? Will your children be confused? Will they think the Vatican II sect is the Catholic Church? These things need to be considered on an individual basis, not as general prohibition based on scandal.

As I wrote in a previous post, "Do not let the position of the SSPX on the 'pope' make you soft. Rather, use it as an opportunity to forge friendships and influence others in that chapel (including the priest) to re-think their position on Francis with some well placed questions. In so doing you might get others to reject Antipope Francis and further expose his sect of darkness. Deo gratias."

"Nevertheless, it has never been the practice of any traditional bishop or priest to require this abjuration of error of any priest who at one time mistakenly recognized John Paul II as a true pope.

"This does not mean that C.M.R.I. in any way endorses the theological contradiction of those traditional priests who maintain that John Paul II is a true pope.

"Lastly, we exhort the faithful to use great discretion when they approach such priests for the Sacraments. This is especially true in regard to their children, who may be confused by their erroneous opinions on the Papacy and on the infallibility of the Church."

4. Another possibility is that we offer the Mass with the OFFICE of the pope and king, not the actual person as such.

I will conclude with my summary from a previous post about attendance at SSPX chapels. To read it in its entirety go to http://introiboadaltaredei2.blogspot.com/2013/11/can-traditionalist-attend-mass-at-sspx.html.

Here is the summary of deciding where to go for Mass, on vacation or otherwise:

Using these principles, if there is no option for you except an SSPX chapel, you may attend provided he rejects Vatican II's errors in principle and was validly ordained in the Traditional Rite. All SSPX priests are taught to reject the Feenyite heresy and they use the 1962 Missal with some pre-1962 rubrics. I know there are those who will disagree with my positions on the validity of Thuc Bishops [I believe them to be valid] and attending the so-called "una cum" Mass (using the name of Francis in the Canon). However, I am comfortable before God with the positions I have taken and conclusion I have drawn. I hope this helps Traditionalists in deciding where to attend Mass and receive the sacraments. [I also hope the day will come when we fight less among ourselves as Traditionalists and realize Francis as the enemy. We can all be sedevacantists on that glorious day, and hasten an imperfect general council for the election of a true pope with whom we can ALL be UNA CUM.---Introibo]
Posted by Introibo Ad Altare Dei at 3:11 AM