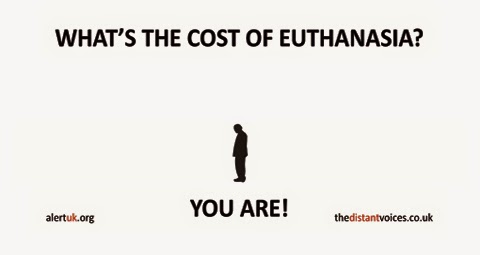 On November 1, 2014, Brittany Maynard will commit suicide. You read that last sentence correctly. Twenty-nine year old Ms. Maynard will (future tense) commit suicide (this post being written 10/20/14). How do I know this gruesome event will take place? Ms. Maynard is making her suicide public and in the state of Oregon, it's legal. Ms. Maynard's story is a very tragic and sad one; she was diagnosed with inoperable brain cancer and given less than a year to live. She is spending the last days of her life with her physician husband trying to persuade others to enact "Death with Dignity" Laws in their own state. Her video can be found here www.youtube.com/watch?v=yPfe3rCcUeQ

The video, just over six minutes in length, is heartbreaking. I'll be the first to admit that I don't know how I'd react to a diagnosis like that. I hate the thought of pain, suffering and death. However, I'd like to think I would face my death as a True Catholic. Both my parents died from cancer, and both (my dad especially) met their end bravely with a Christian resolve. I remember 20 years ago when my father told me, "I don't blame God for my cancer." He was wearing his ubiquitous scapular and, like my mother 14 years later, died with it on and fortified with the Last Rites of the One True Church. Conspicuously absent on Ms. Maynard's video is any mention of God, religion, or the afterlife. It's as if it were directed by Richard Dawkins and peppered throughout with the purposely chosen words and phrases to tug at your heart strings and make you feel bad if you don't have the "option" to kill yourself.

Euthanasia is the ugly twin of abortion at the opposite end of life. In law school we were taught that "Hard cases make for bad law." Norma McCorvey (the Jane Roe in the infamous abortion case Roe v. Wade ) lied and claimed she had been gang raped. The truth was she was made pregnant by a man she thought she had loved, and didn't want to carry the baby. The result is that abortion is legal on demand throughout all nine months of pregnancy. My home state of New York has no restrictions whatsoever.

Now the Hemlock Society (renamed "Compassion & Choices) is trying to do the same with euthanasia. Although Ms. Maynard insists that she "is not committing suicide," she wants to live and give the same "choice to others" as in Oregon, the facts show differently.

Ms. Maynard is obviously not Christian. She sees no redemptive value in any suffering. On the atheistic view, life is painful and ends in death. The correct attitude is to shun the former and delay the latter. On the Christian worldview, Christ showed that suffering has meaning, can be redemptive, and there is a better place awaiting us if we follow Him. No one likes pain, and to be against euthanasia is NOT forcing someone to suffer. The San Francisco Chronicle reports:

“I considered passing away in hospice care at my San Francisco Bay Area home,” Maynard wrote for CNN. “But even with palliative medication, I could develop potentially morphine-resistant pain and suffer personality changes and verbal, cognitive and motor loss of virtually any kind.” Note she writes things “could” go wrong, which means they could work, too.

Palliative care specialist Dr. B.J. Miller of the Zen Hospice Project told me that he didn’t know the particulars of Maynard’s case. “Globally speaking, people do develop intolerance to morphine, and delirium is very common at the end of life” for patients with brain cancer, he noted, but “it’s also true that much of that is treatable.” Palliative sedation cannot reverse cancer, but it can provide relief.

Marilyn Golden of the Disability Rights Education & Defense Fund in Berkeley is concerned that Maynard’s story obscures the larger picture. “For every individual with a happy family who’s not at risk for abuse, there are many other individuals who may be subtly steered toward assisted suicide by their insurance company or pressured by their family.” For every Brittany Maynard, there are others who face serious illnesses — aging, maybe — without Maynard’s extraordinary support system. Golden worries lest “profit-driven managed health care” subtly steer the sick in the direction of — what’s the word? — dignity."

2. The Truth about Oregon

When Barbara Wagner’s doctor prescribed a drug that would likely extend her life and would make her more comfortable, her state insurance program refused to authorize payment for it.  Instead, it sent her a letter saying it would pay for doctor-prescribed suicide.

Randy Stroup, who had prostate cancer, was also offered doctor-prescribed suicide by the Oregon health plan.Some terminally ill patients in Oregon who turned to their state for health care were denied treatment and offered doctor-assisted suicide instead, a proposal some experts have called a “chilling” corruption of medical ethics.

According to the Patients Rights Council:

Lethal prescriptions under the Oregon law are supposed to be limited to patients who have a life expectancy of six months or less. However, during the first two years of the law’s implementation, at least one lethal dose was prescribed more than eight months before the patient took it.

The DHS (Division of Health Services) is not authorized to investigate how physicians determine their patients’ diagnoses or life expectancies. If physicians are prescribing for patients whose life expectancy exceeds six months or who do not have a terminal condition, there is no way to find out since the same doctors who are violating the guidelines would have to report their own violation. “[N]oncompliance is difficult to assess because of the possible repercussions for noncompliant physicians reporting data to the division.”

The DHS has to rely on the word of doctors who prescribe the drugs. Referring to physicians’ reports, the reporting division admitted: “For that matter the entire account [received from doctors] could have been a cock-and-bull story. We assume, however, that physicians were their usual careful and accurate selves.”

While assisted-suicide advocates claim that patients are given new rights under Oregon’s law, nothing could be farther from the truth. Prior to the law’s passage, patients could request, but doctors could not provide, assisted suicide. It was illegal and unethical for a physician to knowingly participate in a patient’s suicide. The law actually empowers doctors by promising them legal immunity if they provide a patient with an intentionally fatal prescription. Yet, advocates still say that the law grants patients a new legal right –the right to ask their doctors for suicide assistance, even though such a request was never illegal. Suicide requests from patients may have been cries for better pain control, support or psychiatric help – but they were never a crime.

In addition, doctors who prescribe assisted suicide under Oregon’s law are exempt from the standard of care that they are required to meet when providing other medical services. Under the assisted-suicide law, a health care provider is not subject to criminal or civil liability or any other professional disciplinary action as long as the provider is acting in “good faith.” This subjective “good faith” standard is far less stringent than the objective “reasonable standard of care” which physicians are required to meet for compassionate medical care such as hospice, palliation or curative treatment.

In the coming months, several states will be considering Oregon-type laws. It remains to be seen whether decision-makers will rely on the deceptively rosy picture painted by assisted-suicide supporters – or on its reality."

The Antipope who claims to be Catholic has done NOTHING about this situation. He has not denounced it, asked for her to reconsider, or requested prayers for her conversion. He and his episcopal lackeys are too busy trying to justify adulterous unions and sodomy all in the name of---oh, yeah---"dignity." Please pray for Ms. Maynard's recovery and conversion.