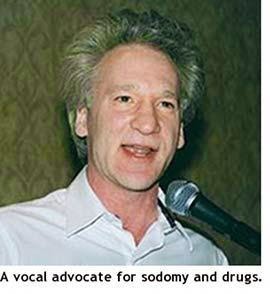 There's no polite way to say this---Bill Maher is a bigoted idiot. The stand-up "comic" and host of the left wing show "Politically Incorrect" has turned his vitriolic criticism, (usually reserved for conservative politicians), to those who believe in God. Maher made a 2008 documentary ("mock-u-mentary" might be a more appropriate appellation) entitled "Religulous" the premise of which is that unless the "enlightened" agnostics and atheists unite against raving religious fanatics, civilization will be brought to ultimate ruin. The very name of the movie is coined from combining "religious" and "ridiculous." The film panders to secularists like Maher, and portrays everyone who believes  in God, especially Christians, as either uneducated buffoons or dangerous lunatics.

Now, Maher has been seen parading around with Dr. Sam Harris (b. 1967), one of the so-called "Four Horsemen of the New Atheism" (the other three being the late Christopher Hitchens, Daniel Dennett, and Richard Dawkins). During one of his tirades with Harris as his guest, Maher had this to say:

"I don't know what happens when you die. I'm honest. These religious people not only can tell us what happens, they know with great certainty and detail. You get 72 virgins, not 71, not 70, exactly 72."(This is a reference to Islam--Introibo)

Maher then goes on to excoriate the evils of Islam (along with Harris) to the consternation of actor Ben Affleck, who said they were being intolerant. Harris said he had studied Islam and it was evil, per se, and Maher ended the conversation by telling Affleck, "We'll have to disagree on this one Ben." Well, I'll have to agree and disagree with Harris and Maher.

I have two bones of contention to pick, one is epistemological (the study of how we know), and the other is ethical.

1. Absolute certainty
When Maher claims that no one can know what happens when we die, I have to ask, "What do any of us know with apodictic (absolute) certainty? Not much. We can be certain that we exist, because if we think or say "I don't exist" we must first exist in order to make the claim. To say otherwise violates the logical law of non-contradiction, and it is self-refuting. We also can know our immediate sense impressions must be true. I know what I'm sensing even if I'm hallucinating or dreaming. Everything else is simply a matter of probability. I'm morally certain that other people exist and the world is not an invention of my mind. I have good reasons for holding this as true. Mr. Maher can do no better. Therefore, when he tells us exactly how many people are in his studio (e.g. 235, not 234 or some other number), he's acting on moral, not apodictic, certainty.

His second error is to confuse natural theology (things which can be known about God from reason) with supernatural revelation (things which we believe based on God revealing it). The Moslem who claims he gets 72 virgins from Allah, does so based on his acceptance of the Koran as divinely revealed. The error of the Moslem is his error in accepting the Koran against the manifest weight of the credible evidence. On the other hand, if it can be shown that the Bible is morally certain to be true, and the Traditionalist Catholic Faith is the custodian of the Bible, then we are rational in accepting what it reveals about the afterlife.

2. Islam is evil.
As any reader of my posts knows, I'm in full agreement with Maher and Harris on this point. Ironically, neither has any reason for saying so, but I'm fully justified. How so you may ask?

Atheists can be good without BELIEF in God, but no one can be good without God's existence. If God exists then so do objective moral values.  By objective morals, I mean something is right or wrong whether or not anyone else believes it to be the case. Murdering an infant for fun is evil even if everyone disagrees. The genocide of Hitler was wrong even if he won the war and made everyone think what he did was just.

Our moral duties flow forth from the moral nature of God. He made the Ten Commandments because they are good; they flow from His divine nature. Furthermore, God holds us accountable for our actions. The moral choices we make are infused with eternal significance. Compare this to atheism.

On the atheistic viewpoint, what is the foundation for moral values? If God does not exist, then there is no reason to think humans are special in any way. As a result of social-biological pressures, there evolved among homo sapiens a sort of "herd morality" that may be advantageous for perpetuating our species, but nothing that makes it objectively right or wrong. That's not to say atheists can't work out a system of ethics with which a theist would mostly agree, nor does it mean that they don't believe in objective moral values. However, they are without any foundation in reality; no ontological anchor.

So when Maher and Harris denounce Islam's jihad bombing of innocent people, they merely don't like it because it's not biologically or socially advantageous, but it can't be deemed wrong in an absolute sense. Furthermore, Harris is a materialist who believes that there is no mind distinct from the brain. Everything we think and do is determined by our environment and genes, i.e., there is no free will, and Harris admits as much. How then can we be held accountable for our actions? They have no moral significance. The Islamic men who attacked the Twin Towers had no choice, so why do Harris and Maher condemn them?

Harris and Maher are fools. What has the Vatican II sect done? Antipope Francis tells us, "Atheists can go to Heaven." So not only has Frankie given up on converting them, he has thrown away the metaphysical underpinning of objective moral values. He leads millions to Hell under the very Theistic guise he seeks to eliminate.