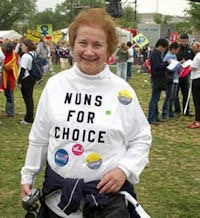 Antipope Francis is praising American nuns, after a two year investigation came to a close. According to Seattle Pi,
Pope Francis has praised the role of women in Catholic theology, extolling what he called their “feminine genius,” describing them as “strawberries on the cake” and talking about a “specific contribution of women to the intelligence of the faith.”

The report, issued on December 16, was resoundingly positive and was well received by the "Leadership Conference of Women Religious" (LCWR). Anyone who hasn't had their head buried like an ostrich knows that what passes for a "nun" in the Vatican II sect these days is a radical feminist who is religiously humanistic, sociologically Marxist, and politically socialist (at best).

Prior to Vatican II there were approximately 180,000 nuns in the U.S. Today, there are roughly 57,000, a decrease of over 67%. When Ratzinger was Antipope, there were stern criticisms of nuns in this country. He wouldn't actually DO anything, but he did like to keep a façade of some sort of Catholicism. Not so Mr. Bergoglio. He praises the most vile elements in his sect.

What's wrong with the Vatican II nuns? I'll spell it out since the report chose to cover it up:

1. Support of abortion, homosexuality, and the Democratic party in the name of "social justice"

The so-called "Nuns on the Bus" traveled around in 2012 to ostensibly raise awareness of the needs of the poor. They condemned then Vice-Presidential candidate, Congressman Paul Ryan, for making budget cuts to social programs. Ryan strongly identifies himself with the Catholic (Vatican II sect) religion. However, they had no criticism of Vice-President Joe Biden, who also receives the invalid Vatican II "communion" while vigorously promoting a budget with money to kill unborn babies by abortion. Biden also supports sodomite "marriage."

The National Coalition of Nuns (NCAN) has gone on record supporting the abortion/contraceptive mandate in Obamacide. NCAN's leader, Catholic Nun Donna Quinn, has openly stated she has taken women for abortions in the past, but exclaimed in 2012 that she leads a “very, very holy” life. The group claims to have “over 2,000 members” and says “a woman cannot have full autonomy unless she has Reproductive Autonomy.”

According to Robert Eady:

Straightforward Wicca or the similar but theologically more ambiguous WomanChurch have moved into many areas of the Catholic Church through feminist "theologians," feminist-inspired local activists and disgruntled nuns.

If there were any doubts .... that religious feminists had run amok in the Church, they were dispelled when faithful Catholic women found items in the (liturgy) kit's bibliography written by pro-abortion feminist nuns. Today almost every conservative Catholic publication has featured a horror story of some form of witchcraft or earth-goddess-inspired liturgy being performed in some Catholic Church in some large North American city.

Two of the most influential "Catholic" Wiccan, or WomanChurch figures to be found opposing the Church today are Mary Daly and Rosemary Radford Ruether.
Ex-nun Mary Daly teaches lesbian witchcraft. She has written several books, including the anti-male and anti-Catholic Beyond God the Father and. Wickedary, a dictionary of sorts for witches. In Wickedary Daly defines the Beatific Vision as: "the 'face to face' vision of god in patriarchal heaven promised as a reward to good Christians; an afterlife of perpetual Boredom: union/ copulation with the 'Divine Essence'; the final consummate union of the Happy Dead Ones with the Supreme Dead One."
Dr. Rosemary Radford Ruether, an influential speaker and writer who authored Sexism and God-Talk, was named to the overtly pro-abortion Catholics for Free Choice board back in 1985.
In true gnostic style, Reuther has described the "patriarchal" Church as an "idol of masculinity" to be broken up and ground into powder.
Typical of most WomanChurch feminists, Ruether has no problem defying Church teaching on homosexuality. In 1985, when promoting her soon-to-be-released Women-Church: Theology and Practice of Feminist Liturgical Communities, Ruether promised a feminist largely "Catholic" audience that one chapter would contain "liturgies for healing" from painful experiences "such as coming out as a lesbian. Not that being a lesbian is unnatural, but that the way we've been repressed by homophobia is unnatural." At this same gathering she urged participants to establish female "base communities," "Women-Church groups," or "covens." (See http://www.catholicculture.org/culture/library/view.cfm?recnum=611) Mr.Eady unfortunately believes the Vatican II sect to be the Catholic Church, but his analysis of the sect's nuns is right on target---Introibo.
This is what received praise from the antipope. The "strawberries" are really nuts; the icing on a Devil's Food Cake full of spiritual poison for those involved. It doesn't take a genius (feminine or otherwise) to see that, Francis.
Posted by Introibo Ad Altare Dei at 6:02 PM