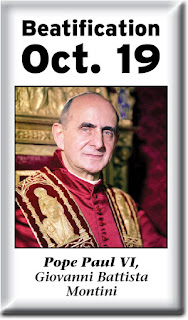 Since 2004, no less than eleven Vatican II dioceses have filed for bankruptcy due to the rampant sodomite/pedophiles in their ranks. The problem is not (and never was) celibacy, but homosexuality. According to researcher Muir ("Homosexuality and the 10% Fallacy" The Wall Street Journal, 3/31/93), research from several countries places homosexual men at about 1% to  3% of the population. That's a 2% average, yet they commit an incredibly disproportionate 20% to 40% of child molestation. According to the Family Research Institute, "If 2% of the population is responsible for 20% to 40% of something as socially and personally troubling as child molestation, something must be desperately wrong with that 2%. Not every homosexual is a child molester. But enough gays do molest children so that the risk of a homosexual molesting a child is 10 to 20 times greater than that of a heterosexual."

How did the so-called "Gay Mafia" take root in the Vatican? The short answer: Giovanni Montini ("Pope" Paul VI) was an apostate and a raging sodomite. The evidence is as great as it is disturbing.

The "Lavender-ing" of America
Paul VI began to promote notorious sodomites in positions of authority. He single-handedly corrupted the hierarchy across the world. In his book, Goodbye Good Men, by Michael S. Rose, the author relates how any man in America wanting to become a Vatican II "priest," and who is not open to homosexuality, is either not accepted or kicked out of the seminaries. The seminaries that are still open have become breeding grounds of unnatural vice. My spiritual father, Fr. Gommar A.DePauw, told me how he was in charge of admissions to the Archdiocesan seminary (Mount St Mary) in Baltimore prior to Vatican II (where he also taught Canon Law and Moral Theology). He related how he rejected large numbers of applicants based on his doubts concerning their sexual orientation. After the good archbishop died in 1961 (Archbishop Francis Keough), he was replaced--on orders from Roncalli--by "gay friendly" Bp. (later "Cardinal") Lawrence Sheehan, who was also a Modernist. Sheehan's first order of business was to remove Fr. DePauw from his position as Dean of Admissions and replace him with a newly ordained priest who was both "compassionate" towards homosexuals, and not as "rigid" on dogma. Need I tell you the result?

Here are but a few examples of the sodomites given high places in America by Paul VI.

2. Cardinal John Wright
A sodomite/pederast, Bill Burnett came forward to accuse Wright formally. Wright had been known to have a predilection for boys going back to his days as a priest in Boston. Burnett's uncle (Fr. Raymond Page) would take Burnett out to a holiday home in Massachusetts, where Wright would come and sodomize the boy with help from Page. Wright gave the young Burnett $20 for each time he ravaged him.  At Vatican II, Wright was a strong advocate for the Modernists, especially concerning ecumenism and religious freedom.

3. Howard Hubbard
Made "bishop" of Albany, NY in 1977, Hubbard advocated for "priestesses," gave "communion" to pro-sodomite, pro-abotion Gov. Andrew Cuomo who lives in open adultery. Hubbard told the New York Times that he would always give "communion" to Cuomo because it's a "private matter." (A public figure who openly flaunts Church teaching is a grave scandal and communion--thank God it's not valid---must be denied).  He was a strong supporter of the sodomite group "Dignity," and was besieged with allegations of male lovers within and without the clergy. He had been complicit in numerous cases of sex abuse cover-ups and was accused of paying a 16 year old boy for sex.

"Blessed" Paul VI (or as my friend at the wonderful website DailyCatholic.org calls him, Paul the Sick) was made the object of veneration by Frankie. And why shouldn't he do so? Montini had no Faith or Morals, just like the rest of the Vatican II wrecking crew. He's a perfect example of why the Vatican II sect is not, and never was, the Roman Catholic Church--and why they will never be "straightened" out.