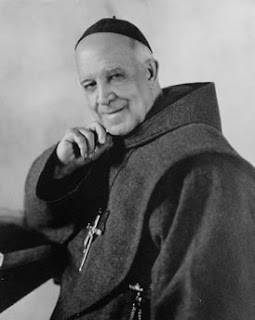 An early Lent and Easter await us this year in 2016. Inevitably, talk of Holy Week arises with those Traditionalists that use the pre-1955 rites, and those that use the changes of Pope Pius XII. I certainly believe that the pre-1955 rites are better, but do not condemn those that utilize the changes with the realization that they paved the way for the Novus Bogus. The changes were not evil per se, only in what was to come. That being said, one of the changes post-1954 was "The Prayer for the Conversion of Heretics" on Good Friday becoming the "Prayer for Church Unity." Nothing heretical, but the change signaled something sinister in the works.

First, there is an aversion to the use of the terms heresy and heretic. The idea of condemnation for wrong beliefs seems "antiquated," "medieval," (always used pejoratively), and "lacking charity." To warn someone they hold a false belief and urge them to repent before they are damned is the height of Charity, properly understood. Second, the old prayer title made it clear that heretics had to convert and return to the unity in Truth which resides exclusively within the One True Church of Christ. The post-1954 title talks of Church Unity. This could (and must) be accomplished that same way. However, it does not, boldly and unequivocally, state that unity comes about this way. It opens the door to "spiritual ecumenism."

We can trace the roots of this back to the completely orthodox Octave of Christian Unity started in 1908. The initiative, begun by Fr. Paul Wattson (a convert from Anglicanism), was blessed by Pope St. Pius X. Fr. Wattson conceived of the week beginning on the Feast of the "Confession of Peter," the Protestant deformation of the ancient Feast of the Chair of Saint Peter, on 18 January, and concluding with the Feast of the Conversion of Saint Paul on 25 January. Pope St. Pius X's successor, Pope Benedict XV, encouraged its observance throughout the Church. For a time, Fr. Wattson, called it the Chair of Unity Octave, to show there is no unity outside the See of Peter.

Things took a bad turn with the advent of Fr. Paul Couturier (1881-1953). Ordained in 1906, Couturier was a disciple of heretic Teilhard de Chardin, and believed in the unity of all through "Christ" regardless of beliefs! Couturier advocated prayer "for the unity of the Church as Christ wills it, and in accordance with the means He wills"--apparently thinking that Christ somehow wills "unity" with those having "differing views of the Petrine ministry" (i.e., heretics). He changed the name of the Octave in 1934, to the "Universal Week of Prayer for Christian Unity." Unity no longer means conversion of those outside the Church. It means the sin of praying communicatio in sacris---prayer/worship with heretics, for the purpose of watering down Catholicism to a form of  a non-dogmatic one-world sect. This is the very goal of Modernism.

Couturier maintained close ties not only with heretics but with Jews, Mohammedans, and Hindus. He founded the Dombes Group, comprised of 20 Modernist and 20 Protestant theologians, whose task was to form a "spiritual ecumenism," which included prayer in common, a "call to conversion" for the sects and the Church with each other (as if the spotless Bride of Christ needs conversion!), and discussion of theological topics. The group had a five-fold approach:

2. review the Scriptural and historical development

3.  identification of the areas of agreement and disagreement

5. a call to conversion for each church (sic) in the areas of attitudes, teachings, and practices.

In other words, conversion was replaced by mutual absorption into something else.

In 1966, two years after the Great Apostasy, the Vatican II sect changed the name of the Octave to that of  "Universal Week of Prayer for Christian Unity." It collaborated with the Masonic World Council of Churches in composing prayers via the Pontifical Council for Promoting Christian Unity in 1968.
In 2008, His Wickedness, "Cardinal" Walter Kasper (tied with Frankie as the biggest apostate in Modernist Rome) had this to say of Couturier:

While (Fr.) Wattson maintained that the goal of unity was the return to the Catholic Church, Abbé Paul Couturier of Lyons (1881–1953) gave a new impetus to this Week in the 1930s, ecumenical in the true sense of the word. He changed the name "Church Unity Octave" to "Universal Week of Prayer for Christian Unity", thus furthering a unity of the Church that "Christ wills by the means he wills".

Couturier is another protected pre-Vatican II Modernist who, ever so slowly and carefully, began changing doctrine by changing verbiage. There is power in words. A simple change can have serious implications. Now consider the mutually contradictory authoritative declarations below, and ask the "recognize and resist" pseudo-Traditionalists, how can they both be from the same Church?


Vatican II, Unitatis Redintegratio #8:
In certain special circumstances, such as the prescribed prayers "for unity," and during ecumenical gatherings, it is allowable, indeed desirable that Catholics should join in prayer with their separated brethren. Such prayers in common are certainly an effective means of obtaining the grace of unity, and they are a true expression of the ties which still bind Catholics to their separated brethren. "For where two or three are gathered together in my name, there am I in the midst of them"

Pope Pius XI, Mortialum Animos #10:
So, Venerable Brethren, it is clear why this Apostolic See has never allowed its subjects to take part in the assemblies of non-Catholics: for the union of Christians can only be promoted by promoting the return to the one true Church of Christ of those who are separated from it, for in the past they have unhappily left it.

Clearly, the latter is Catholic, and the former is not. Let us NOT pray with heretics, but for them. Especially pray during this upcoming Holy Week for those under the delusion that the Vatican II sect is the "Catholic Church," that they may be converted. "This is the doctrine of Catholic Truth from which no one can deviate and keep his Faith and salvation." (First Vatican Council, 1870).
Posted by Introibo Ad Altare Dei at 3:54 AM