The Pot Calls The Kettle Black 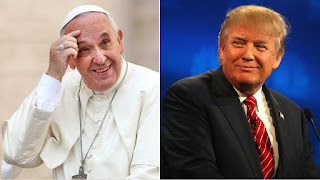 This week, "Who am I to judge" Bergoglio (aka "Pope" Francis), told U.S. Republican Presidential hopeful Donald Trump that he "wasn't Christian." That's a pretty serious judgement. Why isn't Trump Christian? Could it be that he used to support abortion on demand, including partial-birth abortion, and perhaps his claim of becoming pro-life is false? No. Here is what the "pope" said, "A person who thinks only about building walls, wherever they may be, and not building bridges, is not Christian." Ah ha! He's not Christian because he wants to keep out immigrants, especially Mohammedans!

Is Bergoglio Christian? We know he can't be pope, but does he qualify for "least common denominator" Christianity--What C.S. Lewis called "Mere Christianity"? Well here's a compilation of just some  of what he's done since his false pontificate began in March 2013:

Francis claimed that the miracle of Jesus multiplying the bread and fish was really a miracle of 'sharing', not multiplying; (He) said 'Who am I to judge?' about gay priests; The National Abortion and Reproductive Rights Action League tweeted 'Thank you Pope Francis from pro-choice women everywhere'; (He made the) cover of the leading LGBT magazine, The Advocate; (He) said Atheists Who Do Good Are Redeemed; (He) started taking selfies with fans…

(He) held the first Muslim/Jewish prayers and Koran readings at the Vatican; (He) sent an iPhone message to evangelicals through prosperity-gospel millionaire and TV preacher Kenneth Copeland; Peace doves attacked (him); (He) said to 'scold the Lord' and (he also stated) that he would baptize aliens; (He was on the) cover of Rolling Stone; (He) accidentally said 'the F word'; Cardinal Dolan claimed Francis said the 'Catholic Church should not dismiss gay marriage'; (He) mentioned re-thinking celibacy for priests; (The) initial synod document suggested a shift in the Church's position on homosexuality, but was revised; (He) compared Islamic terrorists to Christian fundamentalists…

(He) claimed lost souls do not go to Hell and joked about the Crucifixion of Jesus Christ; (He) claimed that Jesus begged his parents for forgiveness and the Virgin Mary 'reproached' Christ; (He) became PETA's Man of the Year; (He) met with a transgender dubbed 'The Devil's Daughter'; (He) left Lutherans wondering if they can now take "Communion" in the Catholic Church; (He) routinely scolded and mocked 'rigid' Catholics; (He) projected images of animals and humanity onto Saint Peter's for climate change support on the Feast day of the Immaculate Conception…(See http://thewildvoice.org/pope-francis-chronology-perspective/).

But at least he didn't "build walls"! On February 13, 2016, this country lost the closest person to a real Catholic we will probably ever see in government; Associate Justice Antonin Scalia died just about a month before turning 80 years old. (I had the great fortune of studying Constitutional Law under this brilliant jurist for a short time while in law school). Justice Scalia was a reliable vote for traditional values and constitutional principles. He certainly was not shy about excoriating those on the High Court who did otherwise with scathing dissents. He was brilliant even in defeat. The Chief Communist of the U.S., who resides at the White House while he picks and chooses which laws to enforce (an impeachable offense), announced Justice Scalia's death while not even properly dressed with a tie, and will not attend his funeral. Vatican II sect "Catholic" VP Joe Biden, (who supports sodomite marriage and the murder of the unborn) will attend instead. Justice Scalia had his own "Supreme Court" of nine children, one of whom is a Vatican II sect "priest." The Justice liked the "Motu Mass" and attended whenever he could. There was not one word of praise for this man from Francis.

There are two people in particular that should be denounced by the Modernist Vatican, but since that will never happen, I will sound the warning bell.

Besides being the all-white (Obama is bi-racial, not black) female version of Obama, there's another reason (as if any more were really necessary) to keep her out of power. We all know she supports sodomites and child murder. According to Bob Woodward's 1996 book The Choice, First Lady Hillary Rodham Clinton held seance-like conversations with "Eleanor Roosevelt" and "Mahatma Gandhi" as a "therapeutic release." She refused to speak with "Jesus Christ" because it would be "too personal." The book portrays Ms. Jean Houston, co-director of the (New Age) Foundation for Mind Research, as the so-called medium who led Clinton into these altered states. Houston urged Mrs. Clinton to write her book, It Takes a Village and Other Lessons Children Teach Us, and in the process "virtually moved into the White House" for days at a time to help with revisions, according to the Chicago Sun Times.

The now 78 year old Houston denies there was any attempt to communicate with the dead. She ran a New Age Mystery School of which she said, "The traditional question of all Mystery Schools is - How do you place the local self, your local historical self, in the service of the Self? How do you place it in the psyche where the Immanent God resides? How do you respond to the Lure of Becoming and keep up sufficient energy, passion, momentum, delight, engagement, fascination, that you agree to be constantly lured? Unfortunately the stuff of everyday life often inhibits the Lure."  Typical gobbledygook of the New Age--"god" lies within.  She used LSD and hypnosis for these "mind-expanding sessions" with the dead, but further denies they were used on Clinton, or that they were true seances. However, according to bloomberg.com:

"...on a spring day in 1995, according to an account published by Bob Woodward, the Washington investigative journalist of Watergate fame, Clinton ‘communed’ with Eleanor Roosevelt in the White House solarium. Jean Houston, an author with something of the New Age about her, was visiting the First Lady at the White House, and proposed, Woodward writes, that Clinton "search further and dig deeper for her connections to Mrs. Roosevelt." Clinton closed her eyes, and spoke to Roosevelt—and then she spoke as if she were Roosevelt herself." (Emphasis mine--see http://www.bloomberg.com/politics/articles/2015-06-13/hillary-clinton-channels-eleanor-roosevelt-on-the-stump)

New Agers are known to believe in both reincarnation and contacting the "spirit world." Clinton was speaking as if she were possessed by "Eleanor Roosevelt" --this is classic demonic possession. What does God say about such things?

Deuteronomy 18:10, " There shall not be found among you anyone who burns his son or his daughter as an offering, anyone who practices divination or tells fortunes or interprets omens, or is a sorcerer"

Leviticus 19:31, "Give no regard to mediums and familiar spirits; do not seek after them, to be defiled by them: I am the LORD your God."

The Constitution (Heavily influenced by Freemasonry) does not require a religious test for office, but we can certainly refuse to support one who allows demonic forces to take her over.


Bernie Sanders
A Jew born in Brooklyn, Sanders moved to Vermont, and was elected the first openly Socialist member of the House of Representatives in 1990. He got elected the first Socialist to the U.S. Senate in 2006. Although refusing to associate with either Republicans or Democrats, Sanders always caucused with the Democrats and is now running against Clinton for the Democratic nomination for U.S. President.

According to the Washington Post, there is plenty of evidence that he would be the first atheist President:
"I am not actively involved with organized religion."

"I think everyone believes in God in their own ways. To me, it means that all of us are connected, all of life is connected, and that we are all tied together."

"I am motivated by a vision which exists in all of the great religions — in Christianity, in Judaism, in Islam, Buddhism and other religions — and which is so beautifully and clearly stated in Matthew 7:12," Sanders said. "And it states: ‘So in everything, do to others what you would have them do to you, for this sums up the law and the prophets.’ "

"Larry Sanders sums up his brother’s views this way: "He is quite substantially not religious."

In October 2015, Sanders appeared on the Jimmy Kimmel Show. Jimmy Kimmel says "A moment ago you said God forbid, you say you're culturally Jewish, do you believe in God?" Sanders instantly says, "No" while Kimmel is mid-sentence.

What does the Church have to say about atheism and socialism? (Clinton is a Socialist too, Sanders is just more honest in that respect).

"No one can be, at the same time, a sincere Catholic and a true socialist."
-Pope Pius XI, Quadragesimo Anno

Infallible canons from the Vatican Council (1870):

1. If anyone shall deny One true God, Creator and Lord of things visible and invisible; let him be anathema.

2. If anyone shall not be ashamed to affirm that, except matter, nothing exists; let him be anathema.

5. If anyone does not confess that the world, and all things that are contained in it, both spiritual and material, have been, in their whole substance, produced by God out of nothing; or shall say that God created, not by His will, free from all necessity, but by a necessity equal to the necessity whereby He loves Himself; or shall deny that the world was made for the glory of God; let him be anathema.

I heard Sanders speak about about how government must not interfere with a woman's right to kill her unborn child. This man wants the government to control everything, except abortion, which is "keeping government out of the bedroom." Ostensibly, if we legalize cannibalism we'd be "keeping government out of the kitchen." The Masonic "separation of Church and State" would like us to believe that a person's religion (or the lack thereof) should play no part in our decision as to whom we elect. The Church says differently. In memory of Justice Scalia, I cite to the prophetic U.S. Supreme Court case of Church of the Holy Trinity v. U.S. 143 U.S. 457 (1892):

And the religion we need is the One True Church of Jesus Christ.

Posted by Introibo Ad Altare Dei at 3:14 AM