The (Evil) Spirit Of The (New) Liturgy 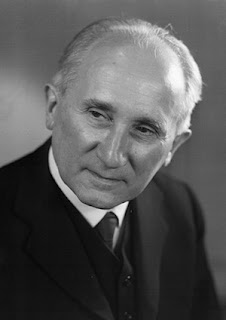 Sophia Institute Press, founded in 1987, dedicates itself to the publication and distribution of "faithful Catholic classics" in books. Recently, I was at a book sale held by a Traditionalist Chapel. To my surprise, books by Fr. Romano Guardini (e.g., The Spirit of the Liturgy)  were more popular than I had imagined. What many people probably don't realize is that this priest was another Modernist "snake in the grass," paving the way to the Great Apostasy of Vatican II. I hope this post will alert my readers to who Guardini really was, and expose the false idea he was a "traditional priest."

Born in 1885, Romano Guardini was ordained a priest in 1910. He received his doctorate in theology in 1915 with his dissertation on St. Bonaventure. In 1945, he was a professor of philosophy at the University of Tubingen, where his emphasis on personalism had him suspect of heresy by the Holy Office under Cardinal Ottaviani. He had a huge impact in both his teachings and who he influenced (Ratzinger, Montini, etc) that would bear its evil fruit at Vatican II. He died in 1968.

Proponent of the Contraceptive Mentality
Fr. Romano Guardini's books remain popular among some Traditionalists. You might want to move them in your library from "Devotional Books" to "Know Thy Enemy."
Posted by Introibo Ad Altare Dei at 3:06 AM