The Mistake is Vatican II 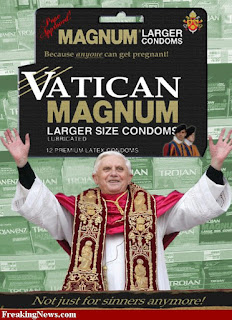 According to the Washington Post:
"A Catholic church in the central Swiss city of Lucerne has sparked controversy among believers with an AIDS awareness campaign that involves distributing to teenagers condoms bearing the slogan 'protect thy neighbor as thyself.'

The church plans to hand out 3,000 condoms as part of an effort to engage young people turned off by the Vatican's long-standing opposition to the use of condoms.

Officials at the diocese of Basel didn't immediately respond Monday to requests for comment. A spokesman in the neighboring diocese of Chur was quoted by Swiss television SF1 describing the condom campaign as 'a mistake.'

How does a blasphemy like this pose as a "mistake?" If you can plot out such nonsense and claim it as error, could you do the same with all of the heresy of Vatican II---and jettison it once and for all?
Posted by Introibo Ad Altare Dei at 9:08 AM No comments:

According to several news sources including the Sydney Morning Herald:

"An Australian Anglican tribunal has found one of its bishops guilty of eight counts of “disgraceful conduct and wilful violation of church ordinances.”

Bishop Ross Davies of Murray, who resigned on September 24, was accused by two fellow Anglican bishops of engaging in verbal abuse, covering up sexual abuse, promoting the Catholic faith instead of his own, and worshiping at a Catholic parish in Adelaide. Before his resignation, Bishop Davies was on sick leave for a year and was living outside his diocese."

This proves that the Anglcans have their own problems with vice, yet isn't it interesting that one of the charges was "worshiping at a Catholic (sic)parish"? Ecumenism is less rampant among heretics of old than Ratzinger's sect. Had one of his "Bishops" done what this Anglican had done, he would have been promoted to Cardinal! Forget the vices--he's appropriately ECU-MANIACAL!!!
Posted by Introibo Ad Altare Dei at 10:00 AM No comments: