Once a Pope, Always a Pope? 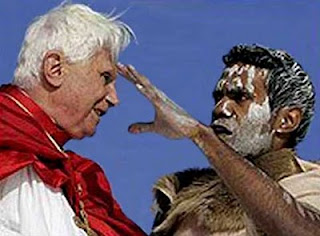 An anonymous person left a comment at my post of 7/29/10, asking me to read an article written by one Mr. John Salsa, a lawyer and conservative member of the Vatican II sect (please see the comment to said post for the link to Mr. Salsa's article). This anonymous poster implores me to reconsider my "being in schism" after reading what Mr. Salsa has written. I read the article carefully, and I now implore both the anonymous commentator and Mr. Salsa to correct their ignorant and incorrect views regarding sedevacantism and join the fight against Ratzinger as Traditionalists.

Mr. Salsa's article, entitled The Errors of Sedevacantism and Ecclesiastical Law is a masterpiece of obfuscation regarding the pope's loss of authority when he falls into heresy. I would like to ask that my prior posts be read from June and July, as it will help paint a clear picture of what sedevacantism is--and is not. The title of the article is a red herring, as sedevacantism is an issue of DIVINE LAW, not ecclesiastical law, and Mr. Salsa's application of both is manifestly incorrect.

He begins his article with the gratuitous--and incorrect--assumption that the biggest argument ("stick" as he calls it) that Traditionalists use is Pope Paul IV's Apostolic Constitution Cum Ex Apostolatus Officio (herinafter "CEAO"), declaring the election of a heretic to the papal throne null and void. Where Salsa gets this idea, I haven't a clue, and he provides us with no citations. All the big names in sedevacantist circles, Cekada, Dolan, Sanborn, Pivarunas, etc. cite to CEAO and a declaration by Pope Innocent III, to show that the Church has always held with theological certainty that it was possible for a heretic to wind up on the papal throne.
Pre-Vatican II theologians and canonists (e.g. Baddi, Bellarmine, Beste, Coronata, Dorsch, Iragui, Prummer, Regatillo, Salaverri, Van Noort--to name but a few!!) have held that a pope, once elected, could (as a private theologian) fall into heresy and lose his authority as pope. Please refer to the wonderful pamphlet Traditionalists, Infallibility, and the Pope by Fr. Cekada, and the articles on sedevacantism available at http://www.traditionalmass.org/. Salsa admits that CEAO does not cover this circumstance, but goes on to make the incredible assertion (without citations) that "most Sedevacantists believe (an elected pope losing his authority) is almost if not entirely impossible." Really? I hope you research your legal briefs better than your theological papers, Mr. Salsa.

Salsa claims that his analysis of CEAO applies to the case of a pope elected and then falls into heresy. How so is anybody's guess. Taking his enunciated principles to task, he claims that we can only know a heretic is a heretic "after the Church judges the matter." Well, not really. The maxim that "The First See is Judged by no one" is explained as follows by canonist Capello: "The Immunity of the Roman Pontiff. The First See is judged by no one (Canon 1556). This concerns the Apostolic See or Roman Pontiff who by the divine law itself enjoys full and absolute immunity." (See Summa Juris Canonici 3:19). This means that there can be no ecclesiastical tribunal by which the pope can be judged, or his decisions appealed. The maxim thus refers to a procedural norm.

One of the canonical sources for the maxium "The First See is judged by no one" comes from the Decree of Gratian, ca 1150, which reads as follows: "whose sins (the pope's) no mortal man presumes to rebuke, for he shall judge all and is to be judged by no one, unless he is suddenly caught deviating from the Faith." (Decree, I, dist. 60, ch. 6) This tells us the very OPPOSITE of what Salsa claims: defection from the Faith is the one sin of the pope we are permitted to judge!

Further, Pope Innocent III (1198-1216) one of the greatest canonists of his time, taught that a pope is "judged":"..he can be shown to be judged, if he manifestly 'loses his savor' in heresy. For 'he who does not believe is already judged'" (Sermo 2: In Consecratione, PL 218:656). A pope who commits a sin of heresy can indeed be shown as one "already judged." Salsa ends his article with this uncanny paragraph, "Restoring the Church will be furthered by recognizing the authority of the current pope, as well as properly distinguishing his binding papal teachings from his mere opinions and actions, which may be the product of human weakness or self-respect, but which can never be evidence of formal heresy."

Really, Mr. Salsa? If you recognize Ratzinger as your pope, you are bound in conscience to follow his commands! Do you believe that a Mass can be valid with no words of consecration, as Ratzinger with official approval from JPII decreed? If he's your pope you must! Who decides what is binding papal teaching and "mere opinion"? You, Mr. Salsa? The decree on a mass with no words of consecration was officially taught by the Modernist Vatican, Mr. Salsa! Who says actions and opinions can never be evidence of formal heresy Mr. Salsa? You? According to theologian Merkelback, external heresy can consist of "signs, deeds, and the omission of deeds" (Summa Theologia Moralis 1:746). Where does the Church teach that "human weakness" or "self-respect" excuses from an act such as kissing the blasphemous Koran like JPII? No where Mr. Salsa! You have not one citation for this novel contention! Salsa also equivocates on the meaning of "formal heresy." "Formal" does not mean "requiring a binding decree", but rather having lost the Faith after holding to it (as opposed to the "material heresy" of one raised in Protestantism, and never being a member of the One True Church).

In summation, being a Traditionalist does not make you a schismatic, but the "recognize the pope, and we will decide what to accept" thesis of Salsa will leave you schizophrenic! Counselor, if you practice civil law as poorly as you attempt to expound on Divine and ecclesiastical law, you'll be the defendant in a legal malpractice suit very soon.