Attempting A Naturalistic Solution To A Supernatural Problem 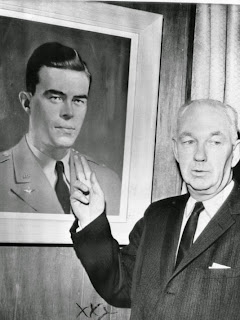 "Less Government, More Responsibility, and ---With God's Help---A Better World." This is the motto of the John Birch Society (JBS) founded in 1958 by Robert Welch. Many Traditionalists are members of the JBS, or have strong sympathies for the organization. Society of St. Pius V (SSPV) General Superior, Bp. Clarence Kelly, is a former member. The JBS is attractive to Traditionalists because it is a conservative political and educational organization committed to expose the evils of Communism. After Vatican II, the sect that emerged claiming to be the Roman Catholic Church has done nothing against Communism and the host of evils afflicting the world. Hence, the JBS seems to hold some promise to fight those battles which the Vatican II sect won't.

Unfortunately, their membership is being led astray into a naturalistic spirit without even realizing it. The main error of the JBS is seeking to defeat Communism and other social ills on a purely natural and materialistic plane through education and politics, while completely ignoring the absolute necessity of supernatural and spiritual means to achieve this goal. John F. McManus, the current president of the JBS, has been rumored to be a Traditionalist, yet rather than working to educate people on the evils of Vatican II and convert them to the One True Church, the JBS officially respects the beliefs of all religions (Catholic, Protestant, Jewish, Moslem, etc.) as if they're all on the same level. This is the heresy of indifferentism also called egalitarianism. I will set forth the basic problems of the JBS below.


The official handbook of the JBS is entitled the Blue Book (hereinafter "BB") which is a written account of the founding of the Society based on a seminar given December 8 and 9, 1958 by Robert Welch, a businessman who made candy. He believed there was a Communist conspiracy to enslave the world and is reported to have stated that the American people consisted of four groups: "Communists, communist dupes or sympathizers, the uninformed who have yet to be awakened to the communist danger, and the ignorant." His organization is named after a Baptist minister who was murdered by Communists; John Birch. In the Foreword to the Second Edition of the BB, Welch states, "We are fighting Communists--nobody else." Later on, in the 1970s, Mr. Welch began to teach that the Communist Conspiracy was an arm of a much larger conspiracy which he called the "Master Conspiracy." This Master Conspiracy involves bankers, the media, the Trilateral Commission, the Council on Foreign Relations, and the United Nations.

The real conspiracy is that of Satan to destroy the One True Church. Our main enemies are not merely Communists, but Freemasons, Moslems, and all who, in an organized manner, are trying to destroy the True Faith. The Vatican II sect is enemy #1 as it consists of Modernists, Masons, Communists, and perverts. On this the JBS is silent. Mr. Welch and the JBS strongly advocate for unrestricted capitalism (aka "free enterprise") which is the result of Protestant heresy in economics. Calvinism teaches that "the elect" will be favored by God in this life. Hence, to ascertain if you are in the elect, work very hard to get rich since this will prove God's favor is upon you. This is the so-called "Protestant work ethic."

2. The Second Stated Purpose: To Make A Better World With America Leading The Way

The U.S. Constitution was founded by men who were Masons and rationalists. The Constitution never mentions Jesus Christ, except in boilerplate language of the date "Anno Domini" (i.e. "The Year of Our Lord" --used by those who did and did not believe in the Divinity of Christ). The idea of "separation of Church and State" enshrined in the First Amendment of the Constitution was condemned by the Church: "The Church ought to be separated from the State, and the State from the Church" (CONDEMNED proposition #55 of Pope Pius IX's Syllabus of Errors --1864).

On page 155 of the BB we read, "Far from founding a religion, we are merely urging Protestants, Catholics, Jews, and Moslems to be better Christians, better Jews, and better Moslems, in accordance with the deepest and most humanitarian promptings of their own religious beliefs." Here the idea that "one religion is as good as another" couldn't be more clear. The BB then continues, "And we are simply trying to draw a 'circle of faith' in God's power and purpose, and of man's relationship to both, which is broad and inclusive enough to take each man's specific faith 'into that circle' without violation."

The "circle of faith" is a Masonic ideal. Freemasons teach that all religions ultimately worship the same "God," under different names. God is to be identified with the power of the universe, and is called "The Great Architect of The Universe," who has manifested Himself in various ways through different "religious leaders" such as Mohammed, Buddha, and Jesus Christ. They teach contradictory doctrines which are of human origin. Therefore, all religions should set aside their differences, focusing only on those doctrines  they hold in common and work together for the spiritual and material advancement of humanity. Isn't this exactly what the JBS teaches?

Freemasonry has been condemned numerous times by the Church, most notably:
Also note the following propositions CONDEMNED by Pope Pius IX in his Syllabus of Errors (1864):


77. In the present day it is no longer expedient that the Catholic religion should be held as the only religion of the State, to the exclusion of all other forms of worship.

78. Hence it has been wisely decided by law, in some Catholic countries, that persons coming to reside therein shall enjoy the public exercise of their own peculiar worship.

79. Moreover, it is false that the civil liberty of every form of worship, and the full power, given to all, of overtly and publicly manifesting any opinions whatsoever and thoughts, conduce more easily to corrupt the morals and minds of the people, and to propagate the pest of indifferentism.

80. The Roman Pontiff can, and ought to, reconcile himself, and come to terms with progress, liberalism and modern civilization.

4. Other Pertinent Problems With The JBS

By focusing its members energies on politics, Traditionalists are kept from serving the Church. The official publication of the JBS, The New American, is laudable insofar as it is unabashedly pro-life and anti-sodomite. Nevertheless, it is totally devoid of Traditional Catholic principles and teaching, so that a proper understanding of these issues becomes impossible.

The constant harping on conspiracies give many members an unhealthy suspicious mentality whereby they see Communist plots behind every door. It also makes one susceptible to other whacky conspiracy ideas not   endorsed by the JBS, such as vaccinations being used by the government for mind control, the Queen of England controls the world, and I even knew one man who for a time lost the True Faith having been convinced that the Resurrection of Jesus Christ was a Jewish conspiracy to weaken the Roman Empire with teaching love of enemies!

5. Conclusion: Stay Away From The JBS and Concentrate On Propagating The True Church

In a time of near universal apostasy, what we need are men and women to help rebuild the Church. Know and spread the True Faith. Expose the evils of the Vatican II sect. Hasten the day when an imperfect general council can get us a True pope to succeed Pope Pius XII. It's been said Mr. Welch converted to Catholicism on his deathbed. Some even claim it was a conversion to Traditionalism, not the Vatican II sect. I hope so, and pray that Mr. Welch is enjoying the Beatific Vision in Heaven. However, his society is seriously flawed, and Traditionalists should stay away. If Mr. McManus is indeed a member of the True Church, ask him to be bold and make it a Traditionalist Catholic organization.

The world is in such bad shape only a miracle, not political action, can save us. Let our motto be: "Less Sin, More Good Works, And---With The Grace of Jesus Christ Through His One True Church--A Traditional Catholic World Leading Souls To Heaven."
Posted by Introibo Ad Altare Dei at 5:21 AM