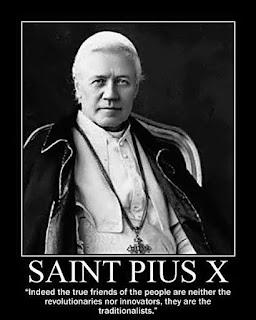 On September 3, the Church will celebrate the feast of Pope St. Pius X, that heroically virtuous pontiff who tried to extirpate the Modernist heretics from the hierarchy. St. Pius X was the first pope to be canonized (on May 29, 1954 by Pope Pius XII) since Pope St. Pius V in 1712 (by Pope Clement XVI). On October 11, the Vatican II sect will celebrate the feast of "Pope Saint" John XXIII (Angelo Roncalli), the Modernist heretic responsible for the Great Apostasy. Antipope John was "canonized" by Jorge Bergoglio (Antipope Francis) on April 27, 2014 along with Antipope John Paul II (Karol Wotyla) as a way of thanking them for undoing all that Pope Pius X accomplished and for setting up Counterfeit Catholicism. In this post, I wish to compare/contrast Rocalli (John XXIII) and St. Pius X. The differences between whom the Catholic Church venerates and whom the Vatican II sect venerates couldn't make it any more clear that they are not one and the same entity as Vatican II apologists would like you to believe.

Pope Benedict XIV (1740-1758), says that "When inquiry is instituted for the purpose of beatification or canonization, no examination is made of miracles until after the heroic virtues or the martyrdom of the servant of God have been proved. These virtues are the first and most decisive witness to sanctity; visions, prophecies, and miracles are only of secondary importance, and they are absolutely ignored if proof of heroic virtues is not forthcoming." With this in mind let's examine two very different lives.

In the brief of beatification (June 3, 1951), Pius XII lists the chief traits deserving the attention and the admiration of the crowds:

CONCLUSION
Now ask yourself, "How can these two men who believed contradictory things both be true saints?" From our beliefs, our actions flow. St. Pius X wanted to "restore all things in Christ." Roncalli wanted to "open the windows of the Church" to let in the polluted air and stench of Modernism. Truth is eternal and immutable. If what St. Pius believed was true, good and beautiful, then what Roncalli believed was false, evil, and ugly.  You must decide which is the True Saint of the One True Church of Christ, and which is a false saint of a false religion. There are only three possibilities when dealing with contradictory positions: 1. St. Pius is right and a saint. Traditionalism is true. 2. Roncalli is right and a saint. The Vatican II sect is true. The Church of Christ did not exist prior to this time. 3. Both are false and neither is a saint. You must reject Christianity outright and become an apostate. What will YOU decide?

I'd like to share something I read several places. Roncalli took the name of a historically recognized antipope--Baldassare Cossa--from the fifteenth century. Many of you reading this may remember the famous "similarities between Abraham Lincoln and John F. Kennedy." Both were elected 100 years apart (1860 and 1960), both had as Vice-Presidents former senators from the South named Johnson who became president after the respective assassinations, etc. Some have speculated "Kennedy was Lincoln reincarnated." We know reincarnation to be false, but the comparisons are intriguing; everybody loves a good coincidence.

However, sometimes I must wonder if certain things are more than coincidence, but rather a sign from God. Here are the coincidences between the first Antipope John XXIII (Cossa) and the second (Roncalli)

2. Both called a Council; Constance and Vatican II

4. Both died before the third session of the Council.

Perhaps evil works in similar ways at times. And here, at least for me, is "the kicker": Frankie chose the opening day of Vatican II (October 11) as the "feast day" of Roncalli. That is also the birthday of my spiritual father, the late, great Fr. Gommar A. DePauw, JCD who was a peritus (i.e. theological expert) at Vatican II working to help Cardinal Ottavianni against the Modernists. He became the first Traditionalist, keeping the True Church alive publicly when he launched the Catholic Traditionalist Movement in 1964! Evil is now being celebrated on the birth of the one who would keep the Faith and start the fight. (For more on Fr. DePauw, see my post of January 19, 2013 "The First.").

On the feast of Pope St. Pius X this September 3rd, let's pray to the holy pontiff that, just as the false papacy of John XXIII in the fifteenth century was crushed, so too may the Vatican II sect of the second Antipope John XXIII be destroyed and a true pope restored. Maybe then we will even see the feast of "St." John XXIII on October 11 replaced with that of "St. Gommar DePauw of Westbury!"

Posted by Introibo Ad Altare Dei at 3:26 AM