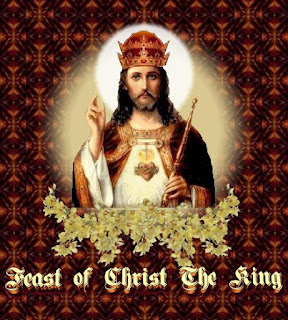 On the Traditionalist Roman Catholic calendar, October 25, 2015, marks the feast of Christ the King. The Vatican II sect celebrates the "Thirtieth Sunday of Ordinary Time." (Very ordinary, indeed, as they have jettisoned the True Faith, Morals, and Sacraments for Modernism and an invalid bread and wine service). The sect will observe its "Christ the King" on November 22, the Sunday before Advent. The Feast of Christ the King was ordered established--and to be celebrated every year on the last Sunday of October--by Pope Pius XI in his famous encyclical Quas Primas of December 11, 1925. From this encyclical, three lessons are clearly taught:

December 7, 1965 will mark the 50th anniversary of the Vatican II sect's heretical declaration Dignitatis Humanae.   Christ's Kingship is perverted and reduced to a mere "Lordship over our personal life," and eliminated over society. This idea was adopted by other heretical societies, all too happy to rejoice that the Vatican II sect was willing to be "first among equals" with other false religions and disassemble the Catholic Countries across the world. Anglican, Lutheran, and other heretics celebrate this revised and evil concept the Sunday before Advent. One female minister, Carol Reynolds, of the First Congregational Church (sic), had this to say on their feast of Christ the King in 2011:

[The feast of Christ the King means] Christ is the light that shines in each one of us. Christ transcends Christianity. Meet the Cosmic Christ.Why are many of us meeting this Christ for the first time this morning? According to former Dominican and now Episcopalian priest Matthew Fox, this image of the Christ has been obscured by fruits of the Enlightenment and the Industrial Revolution: scientific investigation,industrial development, and medical advances. With the new knowledge and discoveries, the universe suddenly lost its sacredness and came to be viewed as more technical and machine-like than awesome and mystical. And, at the same time, the Western world began to think in more individualistic terms, leading many Christians to focus specifically on personal salvation, often at the cost of the health of God’s creation, human and nonhuman. In his creation-based spirituality, Fox asserts that we need to re-imagine a living cosmology for our time. He writes, 'The holy trinity of science (or knowledge of creation), mysticism (or experiential union with creation and its un-nameable mysteries), and art (or expression of our awe at creation) is what constitutes a living cosmology.'

Where does this Reign of Christ leave the rest of the world’s faiths and cultures? Matthew Fox believes THAT this Cosmic Christ connects us to all peoples and that it is a principle discernible within the wisdom traditions of all world religions. He calls the movement to unleash this universal wisdom for the common good "deep ecumenism" and believes the heart of the Cosmic Christ is the figure of Jesus as Sophia or Wisdom. For Fox this is the perfect bridge between Christianity and other faiths. (Emphasis mine).

With the Vatican II sect denying absolute truth and seeing  "degrees of truth" in other sects, this new and heretical concept of Christ's kingship becomes easily understandable. When one begins to doubt the  veracity of the Catholic Religion as  the One True Church, it logically follows that there is no reason to proclaim the Catholic faith as the State religion and refuse public worship to false sects. Christ and His Church are banished from public life.

It began with the arch-heretic, Fr. John Courtney Murray, spreading his errors on Church-State relations in the late 1940s. On July 7, 1954, The Holy Office under Cardinal Ottaviani, condemned four of Murray's teachings as "erroneous doctrinal positions," to wit:

a) The Catholic confessional State, professing itself as such, is not an ideal to which organized political society is universally obliged.

(b)Full religious liberty can be considered as a valid political ideal in a truly democratic State.

(c) The State organized on a genuinely democratic basis must be considered to have done its duty when it
has guaranteed the freedom of the Church by a general guarantee of liberty of religion.

(d) It is true that Leo XIII has said "states must follow that way of worshiping the divinity which God Himself has shown that he desires." (Encyclical Immortale Dei). Words such as these can be understood as referring to the State considered as organized on a basis other than that of the perfectly democratic State but to this latter strictly speaking are not applicable.

In 1958, Cardinal Ottaviani had drawn up 21 propositions of Murray's for formal condemnation. Unfortunately, the death of Pope Pius XII and usurpation of the papal title by Angelo Roncalli ("Pope" John XXIII) prevented their approval. At Vatican II, Murray and his Modernist comrades would have their day. What was previously condemned by all popes and the approved theologians of the Church, would become official teaching!

Compare:
"Every man is free to embrace and profess that religion which, guided by the light of reason, he shall consider true." (Syllabus of Errors, Pope Pius IX, CONDEMNED proposition #15, 1864)

"This Vatican Council declares that the human person has a right to religious freedom. This freedom means that all men are to be immune from coercion on the part of individuals or of social groups and of any human power, in such wise that no one is to be forced to act in a manner contrary to his own beliefs, whether privately or publicly, whether alone or in association with others, within due limits." (Vatican II Declaration Dignitatis Humanae, para. # 2, 1965)

Compare:
"This shameful font of indifferentism gives rise to that absurd and erroneous proposition which claims that liberty of conscience must be maintained for everyone. It spreads ruin in sacred and civil affairs, though some repeat over and over again with the greatest impudence that some advantage accrues to religion from it. "But the death of the soul is worse than freedom of error," as Augustine was wont to say.[21] When all restraints are removed by which men are kept on the narrow path of truth, their nature, which is already inclined to evil, propels them to ruin." (Pope Gregory XVI, Mirari Vos, para. #14, 1832)

"In all his activity a man is bound to follow his conscience in order that he may come to God, the end and purpose of life. It follows that he is not to be forced to act in a manner contrary to his conscience. Nor, on the other hand, is he to be restrained from acting in accordance with his conscience, especially in matters religious. " (Vatican II Declaration Dignitatis Humanae, para. # 3, 1965)


Here's what theologian Tanquerey had to say about the True Church teaching pre-Vatican II:

Freedom of Conscience and of Worship
I. Principles
a) True freedom of conscience is given to us, namely, the right to embrace and profess the true religion according to the laws laid upon us by God or by an authority set up by God.

b) But absolute freedom of conscience must be rejected, that is, the right to choose a religion which is more pleasing, or the right to decide on a religion according to the sole light of the individual's reason.

c) When a religion is concerned with internal acts only, God alone is the judge in this matter.

d)  When a religion is manifested by external acts and, in a special manner, by a cult or a rite, the ecclesiastical and civil authorities have the right and duty to prohibit those acts, which are harmful to the social good. (See A Manual of Dogmatic Theology, Declee Company, 1959 1:166-167; italics in original)

"What about the repeated declarations in "Dignitatis Humanae" about religious freedom as a personal human right? The Council proclaims, I think, an abstract human right, but a right that is not necessarily fully applicable in any given circumstance or place. Because of the "dignity of the human person" man does indeed have a right to religious liberty, in fact, by giving us a free will God has necessarily given us a kind of religious liberty, including the liberty to err. But this does not mean that this liberty may be exercised without reference to anything else. There are many rights that are contingent upon circumstances. Man, for example, has a right to marry. But what of those who are impotent or who cannot find anyone to marry?"

Storch misses the point. The old axiom is, "Error has no rights." No person has a "right" to choose a false religion. It's an abuse of freewill. That's like saying someone has an abstract "right to commit murder." Murder of the body is actually less pernicious than the murder of the soul by heresy. (See St. Matthew 10:28) The right to marry was never condemned by the Church. Religious liberty was so anathematized.

The results of this new concept of Christ as King over private lives only has had its horrible effects. John Paul the Great Apostate urged Catholic States in Europe, such as Italy, to remove the special status of the Church as the State religion. To give but one example, formerly Catholic Spain, a bastion of the Faith, now reports these sad statistics in 2010 after dropping Catholicism as the official religion in 1975:

According to a study by the Spanish Centre for Sociological Research in 2014 about 68% of Spaniards self-identify as Catholics, 2% other faith, and about 27% identify as atheists or declare they have no religion. Most Spaniards do not participate regularly in religious worship. This same study shows that of the Spaniards who identify themselves as religious, 61% barely ever goes to mass, 14% go to mass few times a year, 10% few times per month and 14% every Sunday or multiple times per week. Although a majority of Spaniards are Catholics, most, especially those of the young generation, ignore the Church's conservative moral doctrines on issues such as pre-marital sex, sexual orientation or contraception.

This is yet another consequence of the perverted Vatican II sect and its new teaching on the Kingship of Christ. Truly, it's been said, "Where the Lord does not reign, Satan takes the Throne."

Posted by Introibo Ad Altare Dei at 3:30 AM