Eternal Life Is Worth Attaining 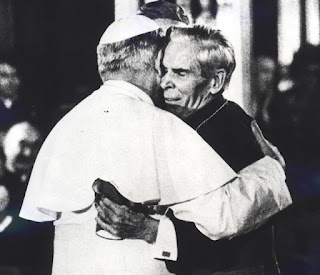 Recently, I came across an old video cassette from the 1980s put out by a group in New Jersey known as "Catholics United For The Faith." It was an old black and white recording of the (then) Monsignor, later Bishop, Fulton J. Sheen offering Midnight Mass at St. Patrick's Cathedral in NYC. Fr. DePauw had just come out with the first and best-to-date video of himself offering the True Mass at the Ave Maria Chapel in Westbury, NY (June 1986). I'm happy to say that both my father and mother (God rest their souls) and yours truly, appear when the congregation goes up to receive Holy Communion. The video was for people who couldn't get to a True Mass, as well as those who were afraid to travel and attend the Chapel because they would be "excommunicated." Fr. DePauw had a 15 minute introduction explaining what the True Mass was and why it could not and should not be changed to a Protestant service. The Vatican II sect was outraged that the video became so popular, but were unable to find something to take people away from that "schismatic priest" and put desperately needed money in their greedy pockets.

Hence, the so-called "Catholics (sic) United For The (pseudo-)Faith" resurrected the old Bp. Sheen video to compete. Remember, there was no FSSP at the time, and most priests who were ordained before Vatican II either were "rusty" with the Latin and rubrics, which wouldn't make a good video, or they were thoroughly Modernist and hated even the thought of offering the real Mass again. But no worries! They had a video of  "America's Bishop" a man known for his sanctity, learning, and orthodoxy, unlike the "schismatic" and even "heretical" Fr. DePauw!   The "conservative" Vatican II sect members mostly fell for it. Little did they know that Bp. Sheen himself, like the video they were using, was a Modernist ploy; trying to get people away from the Church. Fulton John Sheen (1895-1979) was a real wolf in Shepherd's clothing. Despite having a reputation as an incredible orator and preacher from his popular TV show Life Is Worth Living (1951-1957), the facts tell a different tale. Ordained a priest in 1919, and consecrated a bishop in 1951, Sheen was Auxiliary Bishop of the Archdiocese of NYC from 1951-1966 before becoming Bishop of the Diocese of Rochester, NY for the years 1966-1969. What seems like a stellar ecclesiastical vocation, was anything but that.

Bishop Fulton J. Sheen was just another Modernist who had the veneer of orthodoxy and holiness to trap the unsuspecting. It's no surprise that John Paul the Great Apostate hugged Sheen in St. Patrick's Cathedral on October 2, 1979, calling the bishop a "loyal son of the Church (sic)." Equally no surprise is the fact that Sheen is a candidate for "sainthood." (Isn't everyone except Catholics these days?) Fulton Sheen told us "life is worth living." Unfortunately, he never understood that we are destined for eternal life with Christ, which can only be attained through His One True Church. That's what really makes this life worth anything at all.

Posted by Introibo Ad Altare Dei at 3:58 AM